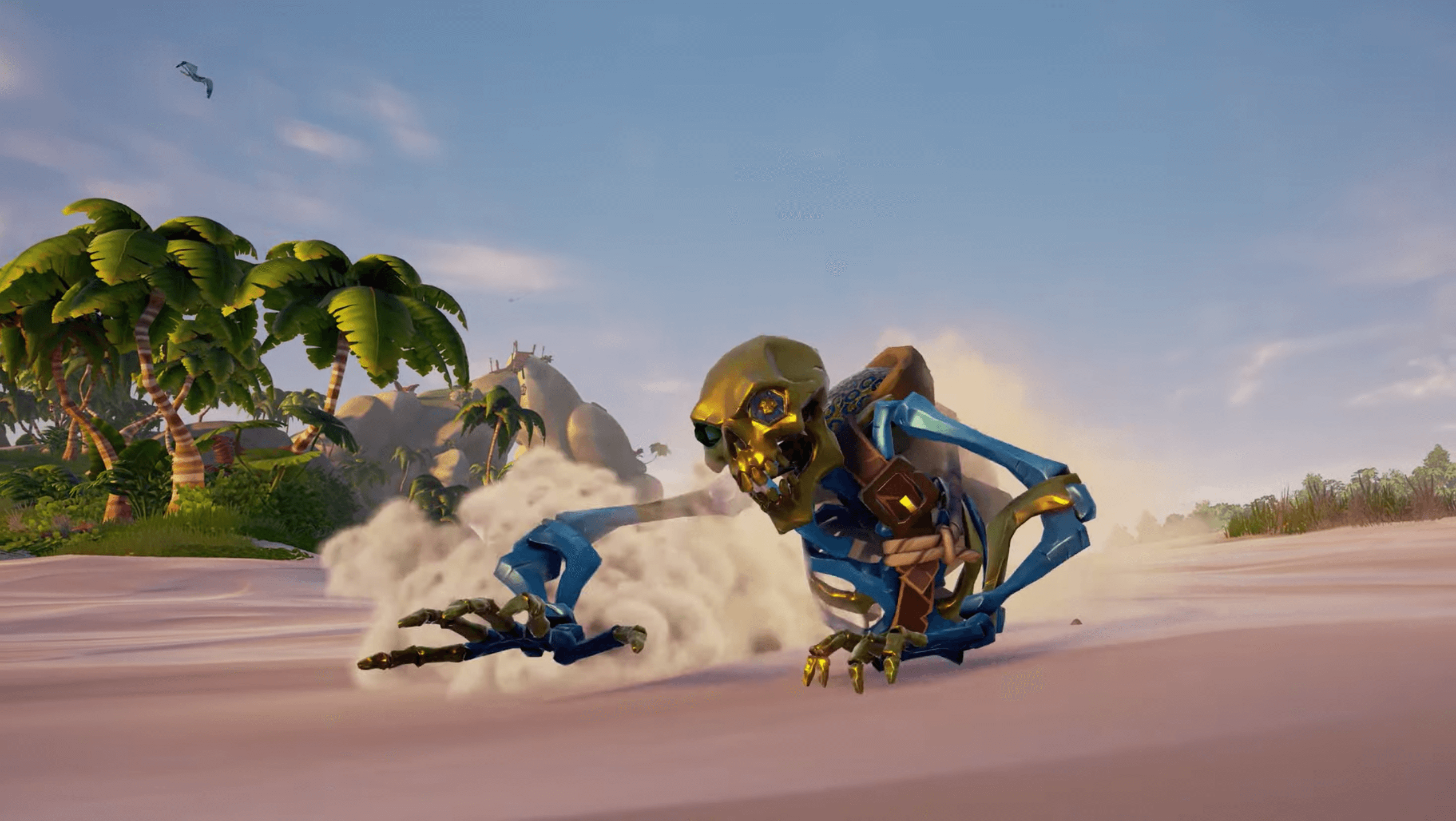 This Smuggler’s Fortune update adds far more than a typical monthly update! We knew it was big—I mean, PETS were added! Yet, we really did not grasp just how big this update was until we started writing about it. It’s been a bit staggering.

One incredibly exciting new addition that seems to have been snuck into this update is the Ancient Skeleton!

In the Smuggler’s Fortune update the Pirate Emporium opens its doors for pirates to purchase pets, emotes and ship cosmetics!

For the purposes of understanding Ancient Skeletons, you should know that the Pirate Emporium accepts payment in neither Gold Coins, nor Doubloons. To purchase items at The Pirate Emporium you will need Sea of Thieves’ newest currency: Ancient Coin.

The primary means of attaining Ancient Coin in Sea of Thieves is purchasing the coin with real-world currency. This currency exchange can be performed through the Xbox Store or in-game through the Pirate Emporium.

Seeing as Sea of Thieves is an ever-developing game as a service, Ancient Coin is meant to be an additional revenue stream to help the developers continue their work enriching this wondrous world.

While real-world currency will be the main way to fill your pockets with Ancient Coin, the Sea of Thieves team is also introducing a fun new in-game mechanic for players to earn Ancient Coin. Queue Ancient Skeletons!

What are Ancient Skeletons?

Ancient Skeletons are very special skeletons you can kill to earn Ancient Coin.

These Ancient Skeletons are emergent foes, who will climb out of the ground when you least expect it! Worse, if left undefeated for too long, this slippery skeleton will burrow back into the ground—disappearing along with that precious Ancient Coin.

How will I know it’s an Ancient Skeleton?

First, these skeletons have their own distinct look. Shining brightly in metallic blue and gold, they carry a satchel emblazoned with the Ancient Coin symbol and stuffed full with coins.

Second, you will hear music sure to make your your senses snap to attention! Nothing quite captures a moment like a Robin Beanland composition.

Once you’ve heard this tune, learn it well. You might not be able to see the skeleton pop, but hearing the music will alert you to its presence—and you’ll want to act swiftly!

How often will Ancient Skeletons Spawn?

Rare. We’re not quite sure how “rare” this means. The developers plan to tinker with this as they see how players are interacting with the store. However, we did receive confirmation that Ancient Skeletons will not be as rare as the Shrouded Ghost Meg.

Rumors on the Wind…

From time to time, we update these articles with any new intel we might discover. Since the initial introduction of Ancient Skeletons, rumors have arisen within this pirate community.

There is one rumor ye may wish to know.

It is a somewhat commonly held belief that you or your crew must be on an island for more than ten minutes for an Ancient Skeleton to spawn.

We must say, in our experience, this seems this hold true. However, whether that is a mere coincidence or not, we cannot know for sure.

Would we like to know more? Perhaps. Then again, ’tis mystery and uncertainty that keep the Sea of Thieves magic alive!

Where can I find Ancient Skeletons?

Anywhere! Well, it seems they are land based like most skeletons. So, I wouldn’t be diving into shipwrecks to seek them out. However, they can be found on any island through the SoT. They can be found in adventure mode and in the Arena!

So while you and several crews are duking it out over some chests in an Arena Match, an Ancient Skeleton could appear. Drop that chest! The first crew to kill it takes the spoils!

Who Gets the Ancient Coin?

Upon killing the Ancient Skeleton, you and your entire crew will earn Ancient Coins. Everyone on your crew will get the same amount as they are not divided between crew members.

But! Pirates ye Beware: Ancient Coins are not dispersed across alliances.

How many Ancient Coins do you get from an Ancient Skeleton?

This is variable. Just as with current treasure, there is a range of values that you can earn.

Based on current sightings and confirmed kills from the SoT community, it appears the range of Ancient Coins that can be obtained from an Ancient Skeleton can be anywhere from 100 to 600. Based on those numbers, if you are lucky enough, you could gain enough Ancient Coin from just one Ancient Skeleton to buy a monkey or parrot!

Again, these Ancient Skeletons will make their debut this Wednesday with the Smuggler’s Fortune update. Armed with this newfound Ancient Skeleton knowledge, you should be well poised to deal some deadly blows if ever they cross your path.

What’s the range on your crew getting the Ancient Coins?

So far it appears the range of Ancient Coins is 100 to 600. Everyone in your crew gets the same amount.

So, it’s been about a year, is the coin reward count still the same?

Yeah, as far as we know. We got the low tier one the other day and it lined up.