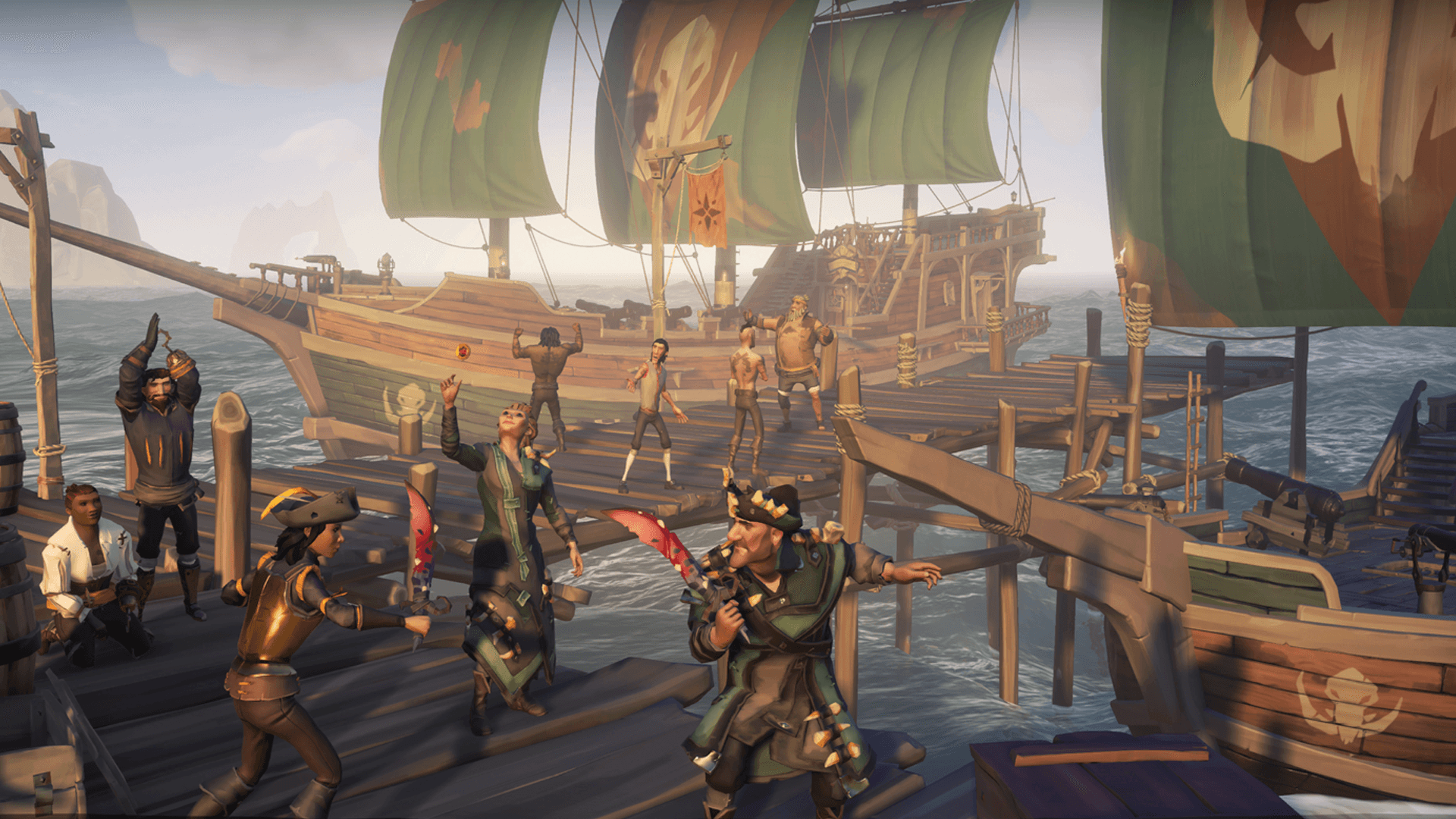 The Black Market Opens in the Sea of Thieves

Ever since the Black Powder Stashes, the Outposts have been a bit more astir. Changes on the wind. Angst and furor bubbling below the surface. Yet one particular pirate seems to have used these happenings to turn a handsome profit: Duke.

Aye, Duke seems to have earned enough capital to give the current shops at the Outposts some healthy competition: the Black Market!

Perhaps we should have seen it coming. Duke has always evinced an entrepreneurial streak—finding ways to solve various trading companies’ problems, and monetizing the process. Aye, and his got quite a high tolerance for risk.

Some may think Duke’s thirst for grog keeps him close to the tavern. Could it also be that Duke knows a tavern is the best place to hear what pirates really want—yet cannot seem to get—from the local traders?

Whatever the case may be, Duke has ventured into the lucrative Outpost market—offering unique items he knows pirates have long hoped to find in the seas.

What can I buy on the Sea of Thieves Black Market?

Perhaps the more noticeable items are those that you might expect to see at the shipwright. The “Castaway Bilge Rat” collection boasts a hull and sails, but there’s no figurehead.

Perhaps oddest of all, those sets do not represent the main level locked set for each trading company: “Ceremonial Admiral,” “Rogue Sea Dog,” and “Royal Sovereign” respectively. So, if we were betting pirates… we might place our money on seeing those…?

For more on level-locked cosmetics, and to get a general sense of which items are native to which areas here’s an article chockablock with infographics: Sea of Thieves Locked Cosmetics, Vol. I.

Existing Outpost Items with a Twist

Perhaps you like the overall design of an item, but you’d prefer to see it in another color. Perhaps you love an existing outpost item so much, you want it in ALL the colors!

Duke will also be offering variants on existing outpost items. I wonder what this might look like in other colors?

Time-Limited and Exclusive Sets from the Past

You see a fellow pirate brandishing a sword you’d steal if you could. You check every weaponsmith, but no one seems to carry it.

Ah, it’s very likely you’ve spotted a time-limited or exclusive item that has since vanished from the Sea of Thieves.

There has been quite a bit of clamor over these items. Pirates have long requested that these items return to the seas. The problem is: the pirates who earned the originals were promised exclusive bragging rights.

So, while Duke could not secure the originals, in true Black Market fashion Duke has secured items that are eerily similar—redesigned, restyled, and resurrected!

Many pirates seem to be awaiting this beauty:

Which Currency does the Black Market Accept?

Ah, yes. Now that there are three in-game currencies, you’ll certainly want to keep them each straight.

The Black Market requires Gold and Doubloons. There is no need for Ancient Coin in Duke’s establishment.

Desirables are made up of three categories: (1) variants of previously time-limited or exclusive sets; (2) brand new additions to existing sets, and (3) brand new sets.

You will use gold to purchase variants of Outpost shop items.

Just be sure to look at the little coins next to the price. That will tell you all you need to know.

Will these Black Market items be here to stay?

No. Perhaps it’s to be expected that the Black Market would be a bit fickle. Then again, perhaps Duke just enjoys the element of novelty and surprise. Whatever the reason, the items for sale on the Black Market will be changing every month!

Never fear! No. Stop. I can see the fear…

First, Duke will be bringing all of the items back into the Sea of Thieves periodically. So, none of these items will be gone permanently. True, we have no inkling as to how long it might be until the items return, but..

Second, we’ve created an entirely new category devoted to letting you know what Duke is selling…

Introducing: What Is Duke Selling?

Creative name, huh? Well, we wanted to make it easy to remember. So:

This will be a little hub for all things Black Market! You’ll be able to see Duke’s latest offerings as well as scroll through past offerings to see if you’ve missed anything, or to simply view a bit of game cosmetic history and evolution.

Aye, and it launches today! There you can see Duke’s offerings for his September 2019 Black Market Grand Opening!

We hope to see you on the seas flouting the worn out reign of the trading companies in your new Black Market swag!

Duke’s Black Market is hardly the only exciting feature in this Smuggler’s Fortune update.

If you plan on spending doubloons in Duke’s Black Market, you might want to do the Mercenary Voyages—Reaper’s Grave of Shipwreck Bay, and Seapost to Seapost—and find Stitcher Jim. You’ll earn more than enough spending money for your trouble.

There’s also another shop, another currency, another foe, and pets!

Curious? Scroll on down… 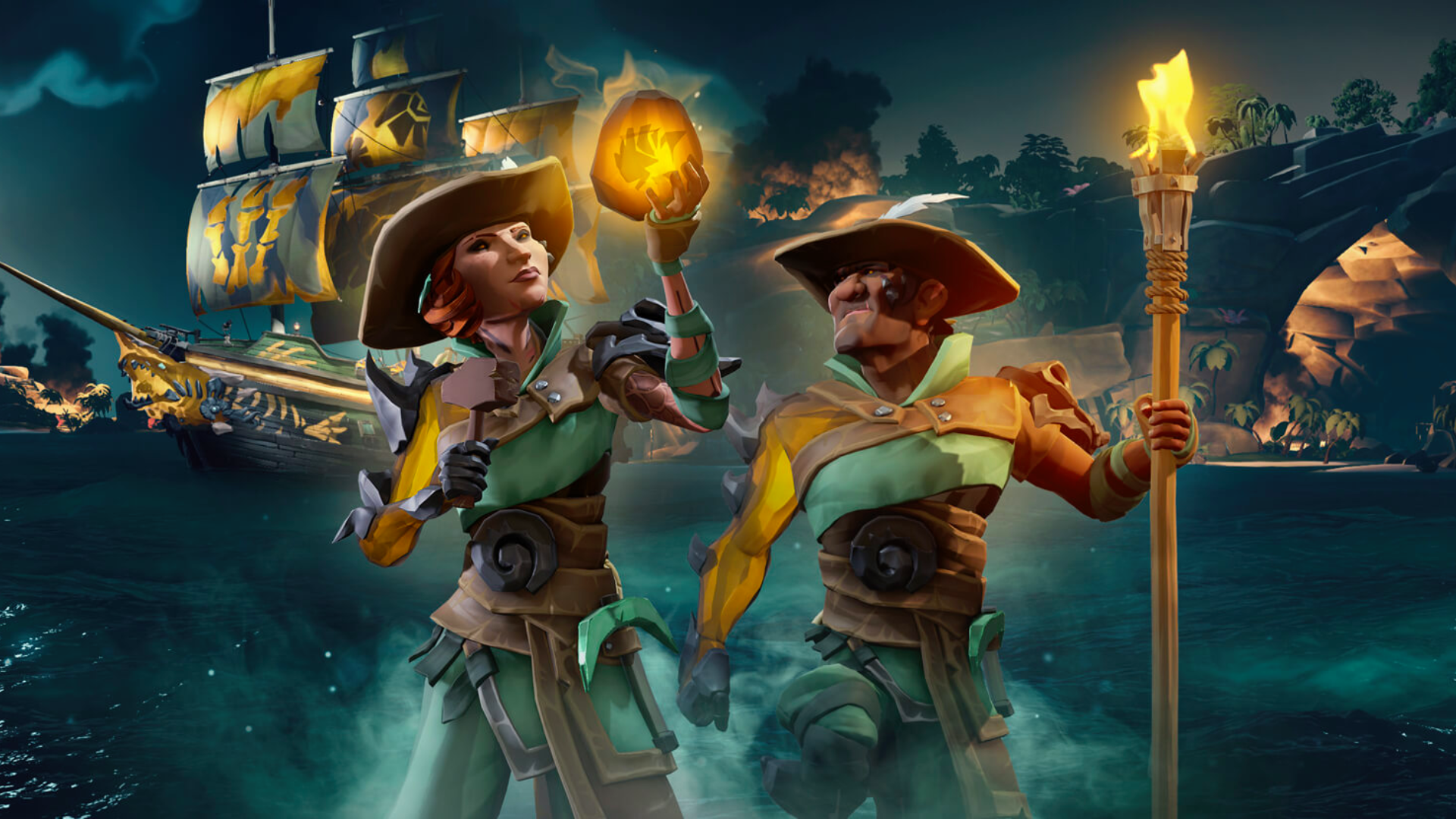 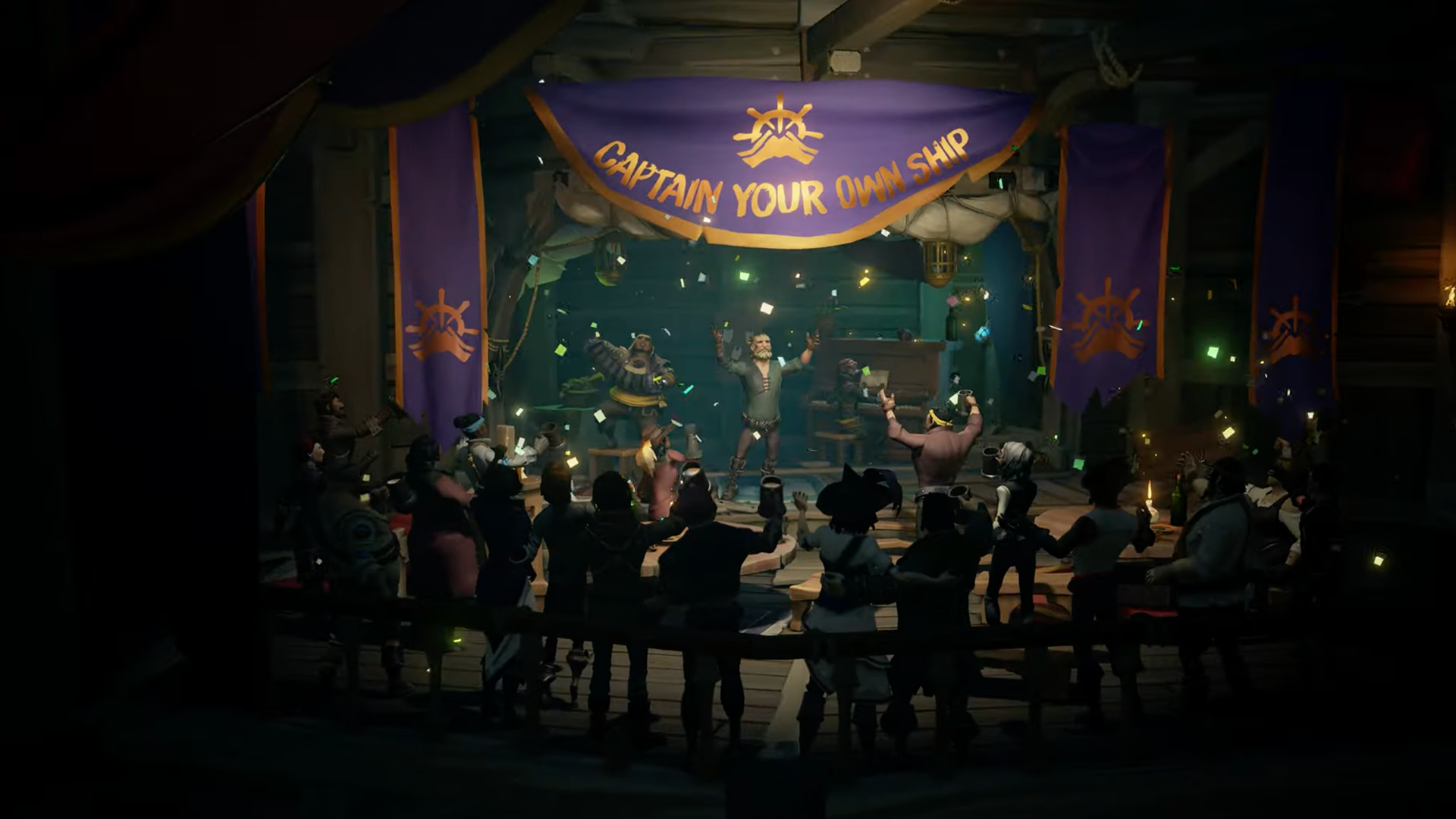