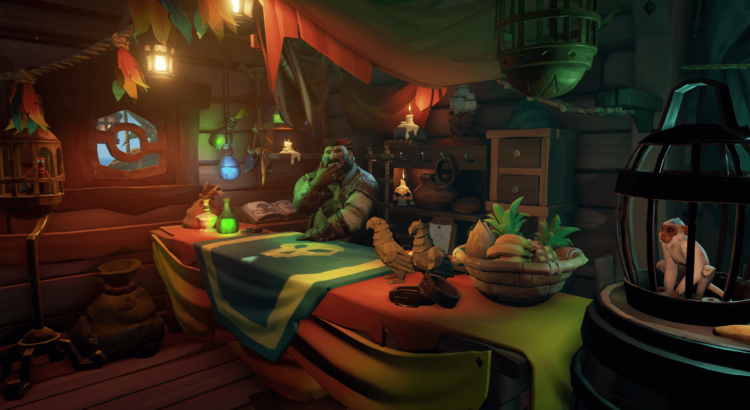 Yo Ho Ho, me hearties! The long and eagerly anticipated Pirate Emporium is finally opening its doors to pirates throughout the seas!

The Sea of Thieves is a fantastical realm in which you can escape the outside world and enjoy the freedom to discover your unique inner pirate.

I hope you still remember your childhood worlds of make believe. Although the imagination can create wonders on its own, dressing up or fashioning props could always add a touch of magic. This is equally so in Sea of Thieves.

We’ve enjoyed the clothing, the equipment, the weapons, and the liveries—selecting those that fit our daily whimsies, those that strike fear in foes, those that our foes will never see coming, or those that just feel “right” for our inner pirate.

The Pirate Emporium offers yet another opportunity to immerse ourselves even further into our “pirate’s life fer me!”

What’s more, by supporting our local Pirate Emporium, we can support the continued embellishment of this grand pirate paradise.

Where is the Pirate Emporium?

There are two main ways you can access the Pirate Emporium.

If you are much too eager to wait until you’ve actually entered the Sea of Thieves, never fear. You can access the Pirate Emporium from the main menu before you’ve even found yourself a ship or crew.

You can also find the Pirate Emporium on any outpost. Yes, quite charmingly, the Pirate Emporium is part of the Sea of Thieves world. Even better, we finally have an answer to a question that has long beleaguered many a pirate: who dwells above the Order of Souls?

Interestingly, there is even mention of this in the novel “Sea of Thieves: Athena’s Fortune”: “[…] the Order had apparently colonized the underside of someone else’s property, draping heavy fabric around its stilts to create a makeshift establishment of their own.” (Allcock 77)

What currency is accepted at the Pirate Emporium?

There is a new currency in the Sea of Thieves: Ancient Coin. Unlike Gold Coins and Doubloons, Ancient Coin represents real-world money. In other words, the Pirate Emporium is a form of the ever-popular in-game microtransactions.

How do you get Ancient Coin?

As with many microtransactions, you don’t pay for the in-game items directly with real world currency. Instead, you pay real-world money to purchase in-game currency—in this instance “Ancient Coin.”

When you browse the stock at the Pirate Emporium, in the bottom right-hand corner you will find the option: “Purchase Ancient Coin.” Clicking on this will bring up a panel of options—coins in bundles of various sizes at various prices.

The bundles are their corresponding prices are as follows:

The bundles and their respective cost are as follows:

As might be expected, the more expensive bundles with more coins cost a bit less per coin. So, if you know yourself well, and you can admit that you will be purchasing quite a few items from the Pirate Emporium, you can save a bit of real-world coin by biting the bullet and purchasing the biggest bundle you can.

As an entirely new feature added to Sea of Thieves, discussing it fully is a bit beyond the scope of an article about the Pirate Emporium. So, we thought it best to give Ancient Skeletons their own separate article.

What is the Pirate Emporium?

Ah, yes. Perhaps we’ve gotten a bit ahead of ourselves here. The Pirate Emporium is a new shop with new items never before seen in the Sea of Thieves.

What items you ask? Read on…

What can you buy at the Pirate Emporium?

Alas! We’ve all been absolutely giddy with anticipation, awaiting the opportunity to purchase one of our own little piratical friends!

In our excitement, we’ve written an entire article just for pets: Sea of Thieves Pets—All You Need to Know!

For the purposes of this Pirate Emporium article, suffice it to say, you can find your new friends here!

Sure, there might be a few stoic pirates on the seas, but pirates tend to be a rather expressive bunch. So, perhaps it’s little wonder why some might want to add a little flourish to their communications.

Here’s a bit of information you might want to know.

How do you purchase emotes?

As you can seen in the screenshot taken from today’s stream: two emotes are offered individually: the Coin Toss Emote, and the Thumbs Up Emote.

The other emotes are only available when purchased as part of a bundle: “Emote Variety Bundle 1.” This first bundle includes all 8 new emotes, including the Coin Toss and Thumbs Up.

How much do Emotes Cost?

From the screenshot above, we can see that two emotes are sold individually at a price of 149 Ancient Coin each.

Seeing that the bundle includes all 8 emotes—and since buying all 8 individually would cost 1192—buying the bundle would save you 193 Ancient Coin.

What emotes are available?

So we know about the Coin Toss and Thumbs up but what about the rest? The complete list of emotes that launched with the Pirate Emporium are:

Below are preview pictures for each of the new emotes:

The preview images of the emote are great and all but how about a few example of these fun new emotes in action?

First up is the Thumbs Down. This emote could come in handy for trying to express your dislike for something a fellow pirate is doing. It could also pair nicely with a “No!” non-verbal communication.

The Coin Toss emote is sure to come in handy when crews are trying to make a tough decision. Why not leave fate up to a coin toss?

If your captain won’t stop blabbing on about the angle of the sails or your cannon accuracy, it might be justified to mock them with a Blah Blah emote!

How do you Equip Emotes?

To equip your new emotes, head to any Vanity Chest. You can find Vanity Chests on your ship or in front of any Clothing Shop.

Once you have opened up the Vanity Chest, tab over to the far right. There is now a new pane for all your emotes.

You can only have 8 emotes equipped at one time so if you would like to use one of your new ones, you will have to replace it with an existing emote in our Emote Wheel.

These “Heritage” items refer to Rare’s heritage: the robust game lineage that preceded Sea of Thieves.

While there’s no telling what type of items the Pirate Emporium might offer in the future, at the Grand Opening the shop is offering a “Bear and Bird Ship Collection.”

This ship collection includes everything you need to deck out your ship: a figurehead, sails, a hull, a wheel, cannons, an anchor, and a flag.

Who is this Bear & Bird?

For some, this might seem to be a preposterous question! Now, now… Not every pirate is an old salt, learned in the lore of Rare.

The Bear & Bird refers to Banjo and Kazooie, the famous duo from Rare’s beloved 3D platformer Banjo-Kazooie, that originally released on the Nintendo 64 back in 1998.

For those familiar with the game, you will immediately notice the nod to the collectibles for which we scoured every corner of the game worlds. Feathers, notes, and Jiggies have all been integrated into the ship cosmetics, providing an aura of nostalgia as you sail the seas.

How much do these Heritage Ship Cosmetics Cost?

However, you can also buy all of the Bear & Bird ship cosmetics in the “Bear & Bird Ship Bundle” for 2,499 Ancient Coins—thus saving yourself a pretty sum of 444 Ancient Coins.

Premium Items at the Pirate Emporium

Some items in the shop have a tell tale “time limited” symbol in the upper right hand corner.

However, even the items that do not currently have such a symbol might not be around forever. During today’s stream, Joe spoke about how Rare has been listening to community feedback in the Insiders program about time-limited items.

Rare is trying to strike a balance.

On the one hand, Rare has so many ideas for new items to bring into the Pirate Emporium, that they’re a bit worried the shop will become overwhelmingly cluttered.

However, Rare also wants to ensure that players can save up for the items they want most, without feeling excessive F.O.M.O. pressure.

The best news is that (1) Joe assured us all that players will be given notice well in advance of any items being removed from the shop so we can all plan accordingly, and (2) Rare listens.

Rare will be tinkering with their offerings as they receive community feedback. So, if you’re saving up for a set, waiting for the holiday season, waiting for your tax return (hey, why not?) let the good pirates at Rare know!

How often will the Pirate Emporium add New Items?

Happily, this question was actually asked in the recent “Live Q + A: Adventure with Joe Neate, Mike Chapman and Ryan Stevenson” as well as on the stream. Joe Neate responded that the plan is to add items monthly—in the monthly update.

However, it is not clear whether this means adding to pet cosmetics, emotes, heritage ship cosmetics, all of the above, or none of the above! Yes, because Joe even said these monthly updates could add entirely new categories!

We figured pirates would be wanting to keep a weather eye out for any emporium-related happenings—particularly in light of seemingly constant items becoming “time-limited” items in the future.

In Store on the Shores!

Whenever you feel a bit of emporium-related curiosity bubbling up, come on over to In Store on the Shores. You’ll find updates, news, fun facts, background information, and surely more!

For now, we sit in eager anticipation of the Grand Opening! We can hardly wait to peruse the Pirate Emporium, carefully curating a collection of items that kindle our imaginations, lighting our way deeper into our pirate’s life.

The Pirate Emporium is not the only new shop on the seas. Duke has just opened the Black Market! Cash in your doubloons and gold coins for Duke’s eclectic imports, including cosmetics that were once thought to be gone forever.

If you need a few more doubloons, take a look at Duke’s new mercenary voyages, and find Stitcher Jim. These should fill your pockets quickly enough.

If you need more Ancient Coins, you might take a look at Ancient Skeletons. There’s no guarantee you’ll find these scalawags often enough to make a full purchase, but you’ll want to be ready if ever they cross your path.

What about pets? Ah, yes. There was far too much to write about pets to even consider including it in this general Pirate Emporium article. So, our feathered and furry friends have their very own feature!

Where do I find all of this?

Scroll on down, me hearties…

7 thoughts to “Sea of Thieves: The Pirate Emporium”