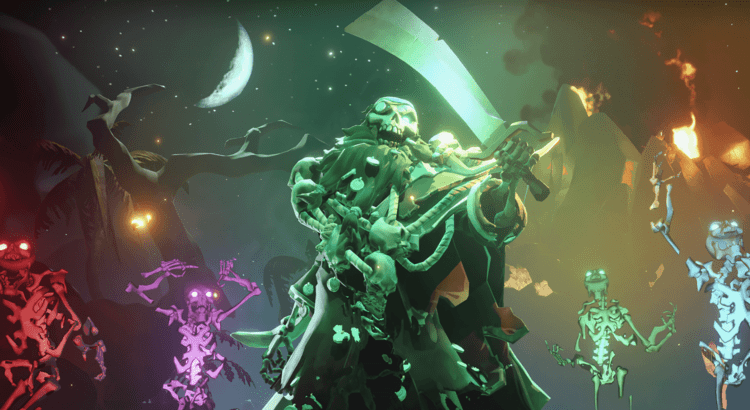 UPDATE: The second Fate of the Damned voyage, The Hunt for Hidden, Ancient Shadows of Fate, is now available. If need a hand looking for Merrick’s precious heirloom or finding a Bilge Rate crew member, be sure to check out our Week 2 voyage guide here!

The Fate of the Damned update has arrived, bringing an eerie aura to the Sea of Thieves.

’Tis the season when we revel in all things haunted and hallowed—most notably by celebrating the annual Festival of the Damned!

Ah, but something else is haunting these shores!

Fate of the Damned: The Lore

Larinna has heard rumors that Shadows of Fate are appearing throughout the Sea of Thieves.

We’ve seen Shadows of Fate before. Activating the Fort of the Damned certainly wakes these skellies. There’s also something about that Athena’s Run of Thieves’ Haven that stirs them up.

Ah, but those appearances all take place on a small number of islands, all in the Ancient Isles.

Now, it seems Shadows of Fate are appearing on numerous islands throughout the Shores of Plenty and The Wilds!

Their growing presence does not bode well. If Shadows of Fate are truly spreading across the Sea of Thieves, we need to find out why.

These Bilge Rats were tasked with acquiring various Flames of Fate, hunting Shadows of Fate, and recording their findings along the way.

Those Bilge Rats have not returned.

If we’re going to find out more about these Shadows of Fate, we’d better first find those Bilge Rats.

Fate of the Damned: The Update

Larinna is offering various and sundry challenges to celebrate the Festival of the Damned.

However, given these rumors, she is also offering a voyage that she hopes might shine a literal and figurative light on these Shadows of Fate.

Ah, but even if we pirates are successful, we’ll still only know one piece of the puzzle—for now.

This story will progress and unfold over the next four weeks, with each week bringing new voyages, challenges, lore, and rewards!

Which voyage begins your adventure? It is “The Search for Wild, Plentiful Shadows of Fate.”

Click on the image above to see everything related to this Fate of the Damned update—including what’s new in the Black Market and the Pirate Emporium.

The Search for Wild, Plentiful Shadows of Fate

You and your crew will sail from island to island in The Shores of Plenty and The Wilds looking for the Bilge Rat Crews that never returned and investigating this emerging threat.

During this voyage you will also acquire Green and Purple Flames of Fate—without a trip to the Ferry of the Damned.

If you enjoy watching your walkthroughs, we have this handy video here for your viewing pleasure!

You can purchase a Fate of the Damned voyage from Larinna. You’ll find her throughout the Sea of Thieves, standing near the entrance of any tavern.

You can talk to Larinna to get a general idea of what’s going on, but even she doesn’t know much yet.

The voyage is free.

So, you should have no problem getting the voyage from her and starting the hunt.

Beginning the Voyage: a Vote and a Note

Throw that voyage down on your ship table, and vote. Upon voting for the voyage you will receive a note from Larinna in your Quest Radial.

If you’ve already collected quite a few quests, don’t worry. Larinna’s note will be distinguished from your other quests by a Bilge Rat symbol.

He might be able to help you get to the bottom of this most recent spooky anomaly to hit the seas.

Speak to Duke on Lagoon of Whispers

As some of you might already know, Duke is now residing on Lagoon of Whispers with his pal Umbra.

Sail on over to Lagoon of Whispers South of Golden Sands Outpost in The Shores of Plenty.

You’ll find Duke on the North side of the small island, standing next to Umbra.

Upon speaking to Duke he will tell you that some Bilge Rats did come through Lagoon of Whispers. They had plenty to share with Duke—but stories are best shared over a tankard of grog—Duke’s grog.

Duke’s grog? Aye, this is not any old grog. This is some of Duke’s special supply! He has buried it somewhere on the island. He just can’t remember where.

Find it for him, and he will tell you everything he knows about that Bilge Rat Crew.

Where is Duke’s Special Grog?

As you might have noticed, The Lagoon of Whispers seems to have a few new structures! For starters, there’s a dock that seems surprisingly sturdy, considering who built it.

With all this construction, it would be no surprise to see a shovel sticking up out of the ground. Well, it seems Duke used that shovel most recently to bury his grog.

It can be in several different locations around the island. Luckily, The Lagoon of Whispers is rather small. So, it should not take long to spot that shovel.

If it helps—true to form—Duke uses a green Bilge Rat shovel.

Once you find it, dig right at that shovel, and you’ll unearth Duke’s Special Grog.

Return it to Duke. That should loosen his tongue a bit.

What does Duke say about the Bilge Rat Crew?

It seems that the other Bilge Rat crew came by before us and was very well-prepared. They even had an island map showing where Shadows of Fate were thought to be.

Unfortunately, they shared some of Duke’s Special Grog and got so woozy they left their map behind.

Seeing as he has no use for it, Duke happily gives you the Bilge Rat Crew Map. You will use this map to find a lost Bilge Rat.

Your new Bilge Rat Crew Map will be added to your Quest Radial. It will look very similar to an X Marks the Spot quest, but it will not have an X on it.

Instead of digging up some artifact or treasure on this island, you will be scouring the island for a lost Bilge Rat crew member.

This is quite nice considering you’ll really just be wandering around trying to find this crew member with no X on the map and no further clues.

Panning around your ship’s map table is easy enough for large islands, but panning and zooming in on each small island looking for a match can be a bit cumbersome.

If you’d like, you can pull up your trusty interactive map and use the island finder feature.

There you’ll find miniature maps for every island in the Sea of Thieves. Simply scroll through and find the island that matches your map.

At the top of the island finder panel, you can set the island sizes smaller for quicker scrolling or larger to get a better look.

Below each miniature map, you’ll see the name of the island and its coordinates. You can also just click on the island, and the interactive map will bring it front and center.

Maybe there’s an enemy ship closing in and you need to find the matey in a hurry.

Whatever the reason, don’t worry. We’ve got you covered.

We’ve added a new Marker Set to the interactive map, “Fate of the Damned: Week 1.” This set includes markers for challenges and voyages alike—including markers for Bilge Rat locations.

Simply turn on the markers titled, “Voyage: Find the Bilge Rat Crew & their Maps.” These markers will show you all the possible Bilge Rat locations for each island.

This way you can narrow your search to a few key spots.

Finding the Bilge Rat Crew Member—On Your Own

Don’t worry, all Bilge Rat Crew Maps lead to smaller islands in the region. So, you shouldn’t have too much ground to cover in your search.

Of course, there are tons of skeletons strewn about the islands. How will you know this is a crew member?

Even better, you’ll also see a lantern nearby. This lantern will help you spot the Bilge Rat! Why? Ah, because that lantern holds a bright green Flame of Fate!

It might even be easier to see these lanterns at night.

Pull out your own lantern, raise it up, and collect that Flame of Fate for yourself. You’ll want to do this before you pick up that new Bilge Rat Crew Map.

Killing them is not required to continue on your journey. So, you could just run for it.

Killing these skellies will also help you complete the A Light in Dark Places Goal for the Fate of the Wild Shores Challenge. The what? Ah, that’s a topic for another article: Sea of Thieves: Fate of the Damned Week 1 Challenge Guide

This will be just like the first Bilge Rat Crew Map. It will direct you to a small island in either the Shores of Plenty or the Wilds.

There will be no X showing you where you’ll find the Bilge Rat, but now that you’ve found one Bilge Rat, it will likely be easier to find another.

This Bilge Rat should have a lantern purple Flame of Fate nearby.

Once again, there will also be a map nearby. However, this time it will be a “Ritual Location Map.”

Similarly to the Bilge Rat Crew Maps, the Ritual Location Map will take you to an island in The Shores of Plenty or The Wilds.

Unlike the Bilge Rat Crew Maps which only lead to small islands, the Ritual Location will always be on a large island.

This X marks a precise ritual location. Sail to the island, and head toward that X!

It seems that some skeletons are using these Ritual Locations to bring the Ghost of Graymarrow back to the land of the living!

If you’ve faced Graymarrow—or the Ghost of Graymarrow—in Revenge of the Morningstar or on the Fort of the Damned, then you know he is a formidable foe.

It seems this ritual has not brought Graymarrow back at his full strength. In his weakened state, this Ghost of Graymarrow is far easier to kill!

The damage he deals and his knockback range are both reduced. The Shadows of Fate skeletons he summons are far easier to kill. Most importantly, the Ghost of Graymarrow’s health is significantly diminished.

Defeating Graymarrow likely won’t take long. Although you’ve sent him from the land of the living, he leaves behind a Ritual Skull.

Well, here’s a fun way to dress up in the spooky spirit: face paint!

Just be sure no one tries to swipe this creepy crawler off your mug.

Alright, pirates, you should now be quite well prepared to set out on this voyage. Track down those Shadows of Fate, and thwart their attempts to bring back their master!

2 thoughts to “Sea of Thieves: Fate of the Damned Week 1 Voyage Guide—The Search for Wild, Plentiful Shadows of Fate”