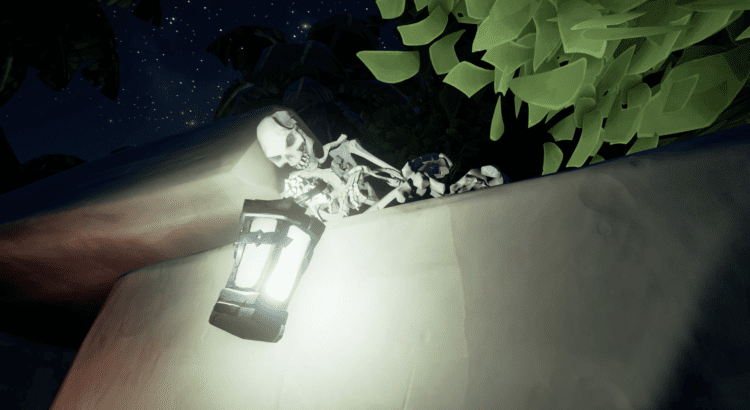 We are now into the second week of the Fate of the Damned update and the sea is no safer than it was before.

The Shadows of Fate have not relented and their presence across the Sea of Thieves grows with each passing week. There are now reports of glowing skeletons roaming The Ancient Isles!

Though as gloomy as it may seem, Larinna is still hopeful that some of her Bilge Rats will return and the mystery around the Shadows of Fate will be solved.

Fate of the Damned: The Lore Continued

The Rumors are True

So far they have been sighted in the three original regions in the Sea of Thieves.

As we know from the previous voyage, Larinna has dispatched crews of Bilge Rats to find what is causing the Shadows of Fate to appear. With the new sightings in the Ancient Isles she sent more recruits to discover the truth.

Those Bilge Rats that ventured out to investigate the unexplained appearances of Shadows of Fate have not returned. Larinna is looking for anyone brave enough to accept the new voyage in hopes they will learn not just about the Shadows of Fate, but the fate of the missing Bilge Rats.

The Hunt for Hidden, Ancient Shadows of Fate

You and your crew will sail from island to island in The Ancient Isles looking for the missing Bilge Rat Crews. During your search you will hopefully unearth the answer to why these Shadows of Fate are invading the Sea of Thieves.

During this voyage you will also acquire Blue and White Flames of Fate—without a trip to the Ferry of the Damned.

If you are a pirate who enjoys watching their guides step by step, you can check out our video guide here:

You can purchase a Fate of the Damned voyage from Larinna. She can be found standing near the entrance of any tavern at any Outpost throughout the Sea of Thieves.

Speak to Larinna and browse her Black Market stock. You’ll find the The Hunt for Hidden, Ancient Shadows of Fate voyage for 0 gold. Purchase the voyage, stock your ship with supplies and raise anchor!

Vote to get Your Note

Head to your ship and vote on the voyage. After voting for the voyage you will receive a note from Larinna in your Quest Radial.

If your Quest Radial is filled with other quests, don’t worry. Larinna’s note can be distinguished from your other quests by a Bilge Rat symbol.

Go to your Quest Radial and select the note. It will remind you that the Shadows of Fate have been spotted in The Ancient Isles. It also mentions that Merrick at Stephen’s Spoils loves to gossip.

As we are on the hunt for information, starting with Merrick wouldn’t be such a bad idea. If there’s something to learn about this encroaching threat, Merrick will know!

Speak to Merrick on Stephen’s Spoils

For those loyal to The Hunter’s Call, you will know where to find Merrick. He can be found on Stephen’s Spoils in The Ancient Isles.

Sail on over to Stephen’s Spoils which is located East of Snake Island and West of Crook’s Hallow.

You’ll find Merrick there standing on the dock of the Seapost. Walk up to Merrick and speak with him.

If you help Merrick retrieve Old Stompy, he will help you in any way he can.

Where is Old Stompy?

The irreplaceable boot you are looking for can be found under water next to Stephen’s Spoils.

After talking to Merrick jump in the water next to the Seapost and dive below the surface.

The boot can be in several different locations around the Seapost. Though it shouldn’t shouldn’t be too hard to find as the Seapost is small.

Additionally, the boot you are looking for will glint and twinkle under water just as other submerged treasure does.

Once you spot the boot under the water, swim over to it and pick it up.

Return Old Stompy to Merrick and he will tell you what he knows.

What gossip about the Bilge Rats and Shadows of Fate does Merrick know?

The Bilge Rats did come by Stephen’s Spoils and inquired to what Merrick knew about the Shadows of Fate. They were in a hurry and didn’t even stop for lunch!

Merrick overheard them talking about an island they wanted to check out. So he wouldn’t forget, Merrick marked down which island it was himself.

He doesn’t know much else but will give you a Bilge Rat Crew Map to the island in question. He will also ask if you’ll stick around to help with dinner.

As much as we all would love to chat it up with Merrick and help cook a delicious stew, there are Bilge Rat’s lives at stake! We will use the Bilge Rat Crew Map to track down the Bilge Rats that passed through earlier.

Your first Bilge Rat Crew Map will be added to your Quest Radial. It will look very similar to an X Marks the Spot quest, but it will not have an X on it.

Instead of digging up chests or trinkets on this island, you will be exploring the island for a lost Bilge Rat crew member.

This is very convenient considering you’ll really just be wandering around trying to find this crew member with no X on the map and no further clues.

While you can pan around your ship’s map table and look for this small island, it might be quicker to pull out your trusty interactive map and use the Island Finder. We have a short write-up on how to use the helpful feature here.

As we mentioned, all Bilge Rat Crew Maps will lead to smaller islands in the region. This will make it easier as you scour the island looking for the Bilge Rat Crew member.

Unfortunately, you will not be looking for any living pirate. You are looking for the skeletal remains of a Bilge Rat.

During your many adventures in the Sea of Thieves you probably encountered dozens of skeletons laying about the islands. How will you know this is a Bilge Rat Crew member?

If that isn’t enough to help you spot the right skeleton, there is also a lantern nearby. Not just any lantern mind you, one that holds a bright white Flame of Fate! For once hunting in the night might be easier as this bright light from the lantern will guide you to the skeleton.

If you are having trouble finding your lost Bilge Rat crew member, we have a quick tutorial on how to use your handy interactive map to find them easily here!

You do not need to kill these Shadows of Fate to progress the voyage. If you don’t feel like a fight you can just run away with your new Bilge Rat Crew Map.

Killing these White Shadows of Fate will also help you complete the Light and Shadow Goal for the Fate of the Ancient Sands Challenge. For more about the new Challenge released with this voyage, check out our guide here: Sea of Thieves: Fate of the Damned Week 2 Challenge Guide

The second Bilge Rat Crew Map will be a similar experience to the first. It will direct you to a small island in The Ancient Isles.

There will be no X showing you where you’ll find the Bilge Rat, but now that you’ve found one lost crew member, it will likely be easier to find the next one.

Run around the small island looking for a skeleton next to a lantern filled with a blue Flame of Fate. This skeleton will be the Bilge Rat you need to find.

Once again, there will also be a map nearby. However, this time it will be a “Ritual Location Map.” Light your lantern with the flame and then pick up the map.

Another batch of Shadows of Fate, this time blue, will attack. If you decide to take them on, you will receive another Skull of the Damned.

The Ritual Location Map will direct you to an island in The Ancient Isles just as the previous Bilge Rat Crew Maps have.

Unlike those maps which only lead to small islands, the Ritual Location will always be on a large island.

This X marks a precise ritual location. Sail to the island, and make your way toward that X!

It appears that skeletons are using these Ritual Locations to bring the Ghost of Graymarrow back from the Sea of the Damned to the land of the living!

If you’ve faced Graymarrow before, during the Revenge of the Morningstar or at the Fort of the Damned then you will know he is a foe you should take seriously.

Lucky for us this ritual has not brought Graymarrow back at his full strength. This Ghost of Graymarrow is weaker and thus far easier to kill!

You can expect the damage he deals to be less than usual and his knockback range has been reduced. The Shadows of Fate skeletons he summons are also far easier to kill. Most importantly, this Ghost of Graymarrow’s health is significantly diminished.

You will surely make quick work of this Ghost of Graymarrow. After you send him back to the Sea of the Damned you will see he leaves behind a Ritual Skull for the taking!

If this is your first time completing a Fate of the Damned voyage you will be rewarded with a fun new face paint!

You should now be ready to set out on this voyage and thwart any attempts to bring back the Ghost of Graymarrow!