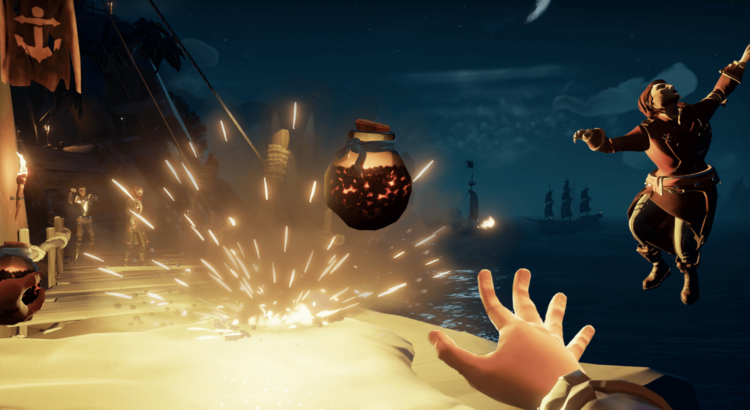 The Heart of Fire update has given the Firebomb a new friend! The Blunderbomb is a brand new throwable, and it is sure to have an explosive impact on life and combat on the Sea of Thieves.

The Blunderbomb is a brand new throwable weapon.

Similar to the Firebomb, the Blunderbomb is a spherical flask that shatters on impact.

However—while the Firebomb is filled with a magically everlasting fuel and flame—the Blunderbomb is packed with Blunderbuss pellets and a mysterious ember glowing liquid. Whatever it is, it is highly combustible!

When the Blunderbomb shatters, the pellets burst from the flask—flying in all directions! These pellets will damage and knock back any who stand within its blast radius.

In short, it is a pirate’s impact grenade.

Where do I find blunderbombs?

Blunderbombs can be found anywhere you might find cannonballs: resource barrels, barrels of plenty, shipwrecks, rowboats, and storage crates found all throughout the Sea of Thieves.

They can be found in both Adventure and Arena modes. When you enter Arena, you will find your boat stocked with two Blunderbombs—as well as two Firebombs and two Chainshots.

Chainshot!? Aye, this update also introduced Chainshot! If ye be curious: How to Use the New Chain Shot Cannonball.

How many Blunderbombs can I carry at a time?

You can carry a maximum of five Blunderbombs at a time.

How many Throwables can I carry at a time?

Ah! There’s the better question. You can carry a maximum of five throwables at a time.

So, you can use all five lots for Blunderbombs, all five slots for Firebombs, or you can mix and match a few of one and a couple of the other.

Who and What will Blunderbombs Damage?

Watch out for friendly fire!

Aye, like the Firebomb, the Blunderbomb can deal damage to your crewmates. If you throw a Blunderbomb too close, you could even deal yourself some damage.

As you might have assumed, you can certainly wield your Blunderbombs against skeletons.

As you might know, Firebombs have no damaging effect on Ashen Skeletons. Sure, they appear wreathed in fire, but this fire does not diminish their health.

Blunderbombs do not damage ships. A Blunderbomb won’t put a hole in the hull or start a fire.

However, Blunderbombs do provide hefty knock-back, causing the boat to pitch and shift to the side. As you might expect, this knock-back is greater when the Blunderbombs are cannoned.

If a ship is tearing mightily through the waves, the wind filling its sails, then we’re not sure if this knock-back will be enough to change its course by a consequential degree.

However, we are definitely eager to try knocking a ship off course—particularly if it is going for a ram.

Yes, the Blunderbomb can be used against the animals roaming the islands. This is a quick way to stock up on meat. Throw one Blunderbomb into a brood of chickens, and you’ve got your crew a chicken dinner.

Like the Firebombs, for any wild animals within its blast radius, the Blunderbomb is a one-shot kill.

Unlike the Firebomb, the Blunderbomb will not cook the animals it strikes. Of course, this means you’ll need to cook the meat, lest you fancy a sick pirate.

On the other hand, few chefs would recommend the Firebomb cooking method. Often, the meat turns out burnt. So, it’s quite nice that the Blunderbomb allows you to collect several pieces of meat at once, without turning any to char.

Tavern Take-Away: if you need to eat the meat right away, use a Firebomb; if you can cook the meat later, use a Blunderbomb.

How much damage do Blunderbombs cause?

Don’t worry. Unlike the Blunderbuss, the Blunderbomb is not a one-shot kill—no matter how close your target.

Even if you throw the Blunderbomb at point blank range, the most damage you will do is 50%.

If you do not hit your target, but your target is within the blast radius, you will only do a bit of damage. The picture below shows how far the health bar went down. We estimate this as a reduction of approximately 20%?

As you might imagine, a direct hit also causes more knock-back than an indirect hit.

Happily, when it comes to skeletons, direct hits with a Blunderbomb will deliver a one-shot kill. Indirect hits will do some damage, but won’t cause instant death to a skellie with full health.

Naturally, the percent of damage will vary greatly depending on the skeleton’s starting health. After all, ambient skellies have a lot less health than the skellies you fight for Order of Souls quests on Athena Voyages.

As you’ve likely guessed, the damage inflicted on Skeleton Captains and Skeleton Lords will be an even lower percentage of their overall health, and they will not suffer instant death even with a direct hit.

However, the contrast with the Firebomb is worth noting.

Although it may take a few seconds—and you should avoid leading them into water—for all skeletons that are not Skeleton Captains, Skeleton Lords, or Ashen Skeletons, Firebombs do not require a direct hit to shatter those bones.

You can throw one Firebomb into a group of skellies, watch them light up, and know that they’ll soon be gone. Moreover, this is the case whether they are ambient skellies or level 50 Order of Souls skellies.

By contrast, the Blunderbomb must be a direct hit. This means, if you want that instant death, you’ll need one Blunderbomb for each individual skeleton you hope to kill.

So, if you deciding what to bring to a skellie fight, you might carry your Firebombs and save your Blunderbombs for another fight.

What is the Blast Radius?

For science! Aye, we did a little experiment to report back to you all on how close your Blunderbomb needs to land to dole out damage.

Our Findings:
The blast radius is three paces.

If you’re within 3 paces of where the Blunderbomb struck, you’ll get that 20% damage and some knock-back.

If you’re 4 paces from where the Blunderbomb struck, feel free to taunt your nemesis with an emote of your choice.

How Great is the Knock-Back?

The knock-back is greater the closer the blunderbomb lands to the opponent. For maximum knock-back, knocking a player off a ship for instance, you will want a direct hit.

To move them a small distance away hitting them within the blast radius will do just fine.

How do I use Blunderbombs?

Blunderbombs can be thrown or cannoned.

There does not seem to be any greater damage dealt when the Blunderbomb is cannoned. However, cannoning Blunderbombs does seem to cause more knock-back—at least for ships.

As with your Cursed Cannonballs and Firebombs, you can switch between various projectiles without leaving your cannon. While on a cannon, the button that would normally pull up your Item Radial, will instead bring up your projectile options.

Some of the Best Ways to use the Blunderbomb’s Greatest Strength: the Knock-Back

In PvP, there are many ways to lower your opponent’s health bar. However, where the Blunderbomb really outshines any other weapon is its knock-back effect.

We recommend watching the Sea of Thieves News video for March 4th, 2020. In that video, PedroDBR provides an excellent exhibition of each knock-back strategy discussed below.

If you can’t watch it at the moment, not to worry. We’ve provided little (silent) clips below.

You can use Blunderbombs to knock pirates off items with which they’re currently interacting.

For example, you might see a crew trying to raise the anchor you just dropped to the depths. Toss over a Blunderbomb, and knock them all off.

Perhaps you’ve set a boat afire and there’s a pirate trying to use the water barrel. You can knock them off, too!

Is someone rummaging through your food barrel!? Get that scoundrel’s filthy hands off your fishies!

Let’s pretend an opponent’s ship is charging for yours. There’s a foe standing on the bowsprit hoping to board once they ram. Well, throw a Blunderbomb at the scalawag! Into the ocean they’ll go!

Although we’ve also enjoyed cannoning such would-be boarders with a last-second Jig Ball.

Aye, we’ve all been there. You’re trying to board a ship. You’re clinging to the ladder’s bottom rung, and each time you reach up you find yourself staring down the barrel of a Blunderbuss.

The Blunderbomb might help you out. Have a Blunderbomb equipped in your hand before catching the ladder. Climb up a bit, let go of the ladder, and as you fall, pull out the Blunderbomb and toss it at the pirate blocking your path.

You could also have one of your crewmates pelt the pirate blocking the ladder, allowing you climb up safely.

Let’s pretend you see someone climbing your ladder, but you’re not close enough to offer them an intimate greeting from your Blunderbuss—or you don’t have your Blunderbuss equipped.

If you have a Blunderbomb handy, throw it at the boarder. If you hit your target, you should see them hurled into the ocean.

Knocking Boarders Off the Ship

Aye, sometimes—despite your best efforts—an enemy pirate does board the ship. If you can get the boarder onto the top deck, you might still be able to knock them off the ship with a Blunderbomb.

The knock-back will occur in more-or-less the direction you’ve thrown the Blunderbomb. So, just make sure you position yourself so you’re throwing it in the direction you hope them to fly off your boat.

When Firebombs were first introduced we had a sneaking suspicion more throwables were yet to come. After all, why label the prompt “throwables” if there were only ever going to be firebombs.

For more about “Firebombs”… How to Set the World on Fire!