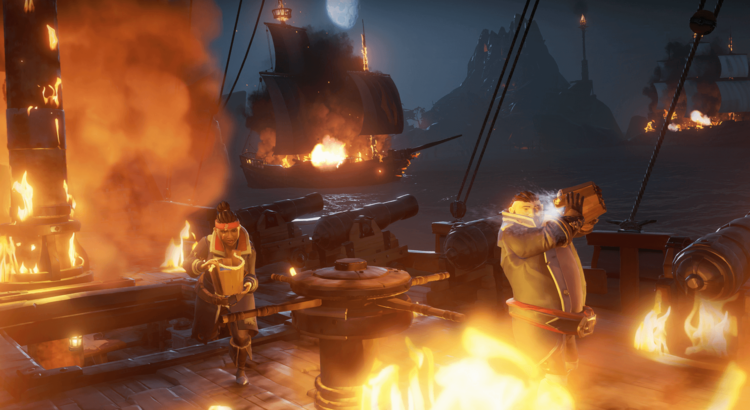 We have fishing, we have pets, and now we have the Sea of Thieves community’s next most anticipated feature: fire!

No longer confined to lanterns and beacons, this is an exciting new tool in the ever expanding sandbox that Sea of Thieves has to offer—opening up the possibilities for new tactics in the ever deepening combat!

Now, now. Before we allow our minds to race with these possibilities, we should probably cover some basics…

What can be set on fire?

Players, skeletons, animals and ships! “Ships” include not only player ships, but also those cantankerous skeleton ships!

Notably, your treasure is not damaged by fire. So, even if your ship goes up in flames, you will be able to retrieve your treasure from the wreckage.

However, when we speak of “treasure,” we are not including those fragile rum bottles available through Cargo Runs. Those do take fire damage! Your plants and cloths should be just fine though.

Interestingly, rowboats seem to be coated in some sort of fire repellant…

How do you start a fire?

Have you’ve ever watched someone try to create a fire with friction? They start out using some rhythmic motion. As the desperation sets in, the motions begin to look increasingly spastic, until finally their arms go limp, they hang their head, and catch their breath—with no fire.

In Sea of Thieves, there are several far easier ways to start a fire. Most of which involve game mechanics you already know and love!

As if we needed more reasons to love these barrels of mayhem!

Detonating a Gunpowder Keg will set anything in its blast radius ablaze! This means you, your crew, skeletons and ships. Adding fire to the chaos of getting hit with a Gunpowder barrel just made them that much more deadly!

Sailing through a storm? Watch out for lightning!

A lightning strike could set you or your boat on fire! Worse… the storm’s rain is not likely to put it out.

As if those flying volcanic rocks in the Devil’s Roar weren’t menacing enough, brace yourself. These flaming projectiles can now spread their fire on impact!

Leaving your food too long on your stove can now start a fire on your ship.

Yes, that one crew mate of yours that is constantly burning your precious meat might now need to face some consequences—lest the rest of your ship and crew go up in smoke!

In our experience, it took roughly 7 minutes for a piece of snake to catch fire. Now to try a banana…

Ah! Glad we did try burning a banana. The banana took roughly 5 minutes and 15 seconds to catch fire.

Although we’ve not yet tested every food option, a pattern seems to have emerged.

Food will catch fire 5 minutes after the food is fully burnt.

So that means if we board a ship sitting vacant at an island, and start cooking a banana, they’ll have 5 minutes and 15 seconds to get back to their boat and realize our skullduggery… Interesting…

Cooking spots on islands throughout the seas will no longer be lit by default. Below the dangling skillets, you’ll see what appears to be a mound of rocks.

How do you start a Sea of Thieves Campfire?

First, you will need wood. How much wood? Only 1 wooden plank. If you hold a plank near the rocks, you will be prompted with using your interact button (i.e. “X” on a controller) to “Build Campfire.”

Your lantern is likely the easiest way to ignite your campfire, but it is not the only way.

You can light a campfire with any of your weapons! It seems to light quicker, if you aim low into the base of the wood pile.

You can also ignite campfires using the fire-making methods listed in this section. You can explode a gunpowder barrel near the campfire. Although we’ve not yet witnessed this ourselves, it stands to reason that a fortuitously aimed volcanic rock or a lightning strike would also do the trick.

You could also use a firebomb. More on those devilish little beauties below…

Can you put out a Campfire?

Yes! Grab your bucket. Scoop up some water, and throw the water on your fire.

Of course, this also means that you could stumble upon a campfire with wood that has not already been burnt up. In that case, you won’t need a wood plank. You’ll only need to ignite the wood you see.

Why would I want to put out a Campfire?

Aside from any early childhood conditioning by Smoky the Bear, the plumes of smoke arising from campfires in Sea of Thieves are now much more visible.

This could be helpful. You could light a nearby campfire to let your crewmates know where they can join you (perhaps in defeating a Skeleton Captain).

However, let’s pretend you were peacefully cooking a bit of fish when a strange ship sails up. You decide you’d like to engage in a bit of mischief, hiding yourself in a nearby corner, until you can sneak aboard their ship.

Well, you might want to put out that campfire before it gives you away more quickly and precisely than your mermaid.

How long does a Campfire last?

If you don’t douse your flames prematurely, lighting one little plank of wood will keep your campfire going for 10 minutes. During that time, you’ll see the wood slowly begin to blacken, until it is fully charred and the flames go out.

Where are campfires located?

Campfires can be found all over the Sea of Thieves. Including the Devil’s Roar! We have this handy guide here that lists each campfire in the Sea of Thieves categorized by the island they are on. Have fun cooking up those fishes!

These new incendiary items add a fantastic new element to the game, and hint at more to come…

What is a Sea of Thieves Firebomb?

Frightening and exciting all at once, firebombs are spherical flasks filled with a magical liquid and vibrant flames. On impact, the glass shatters and flames burst forth!

Where do you find Firebombs?

Barrels! Just like cursed cannonballs, you can find these in barrels on islands, barrels in shipwrecks, or anywhere else you might find resources. Fun fact:

Rowboats can now spawn with resources inside!

So, if you stumble upon a rowboat don’t pass it up. Even if you already have a rowboat, you might want to check the ones you find for additional resources.

How many Firebombs can you pick up at a time?

You can pick up a total of five Firebombs before you’ll need to store them to free up space.

Like all other resources, you can store Firebombs in a resource crate or a rowboat. On your ship, Firebombs are stored in your cannonball crates.

How do you use Firebombs?

Ah! This is where this new item is so much more than it seems. Firebombs have opened up an entirely new game mechanic and item genre in Sea of Thieves: throwing and throwables!

Firebombs are the first of a new item genre: throwables.

Why do we say the first? Well, if there were no intent for pirates to ever be able to throw anything else, then we would expect the in-game prompt for equipping Firebombs to simply read “Firebombs.”

Instead, when you pull up your item radial, you’ll see a prompt labeled “Throwables.” Follow the prompt and you will see your Firebombs waiting to be selected. You’ll also see many empty spaces around the radial, just waiting to be filled…

To throw your Firebombs, simply use your right trigger—the same as if you were shooting a gun.

You can throw these firebombs at any flammable feature in Sea of Thieves: pirates, skeletons, ships, animals, and campfires.

Hungry? If you see a flock of chickens, you can throw a Firebomb into their little pecking circle. Not only will you kill the chickens, you’ll cook them! Be warned, this is not a controlled cooking method. So, your food could be cooked just right, or it could be burnt.

You can shoot firebombs out of your cannons, too!

As if seeing cannons aglow of with cursed cannonballs wasn’t terrifying enough, now you could find yourself facing cannons aflame!

If your target is an enemy ship, cannoning a firebomb will do more damage that boarding the ship and throwing a firebomb. It seems the cannon’s blast stirs up potion within the Firebomb, making the fire it creates spread faster.

However, fire can only spread to the flammable features mentioned above: players, skeletons, animals, and ships. So, you need not worry about sailing to an island only to find a giant conflagration!

When a ship is on fire, the fire will slowly spread. If left unchecked, the fire will eventually consume your ship entirely! The fire can even put holes in your hull! A ship fire can also destroy you ship wheel, capstan and mast the same as if it were hit by cannonballs.

If your ship is on fire, that fire can also spread to you!

Likewise, if you are on fire you can become a human torch—for better or for worse. While you are on fire, you can run into other players or skeletons to set them on fire. Thank you Sea of Thieves for creating the most dangerous game of tag!

How do you put out a fire?

There’s water all around the Sea of Thieves. Ah, but throwing yourself overboard to collect a bucket of water might not always be the most appealing course of action.

Luckily, there is now a Water Barrel!

What is a Water Barrel?

With fire, the SoT team snuck in a very useful water barrel that can be found on any ship type.

You can find this new tool in the middle deck of the Galleon and the bottom deck of the Brig and Sloop.

On the water barrel, you will see a lever. Use this lever to fill up the barrel with water. You can now use your bucket to scoop up some water and douse those destructive flames.

For each pull of the lever, you should be able to get one bucket of water. Three pulls of the lever fills your barrel to the brim and gives you three buckets.

Now you might be worried that while you might be putting out the flames, “Won’t I just be filling my ship with water?” Fear not! Any water that douses a fire is evaporated and does not fill your ship’s hull. Whew!

What if I’m on fire?

While there is no stop, drop, and roll, there is still that option to throw yourself overboard.

There is also a brand new way to use your bucket!

If you are on fire, you can now use a bucket to douse yourself!

Aye, the SoT team has added a new secondary ability while holding a bucket. Use the left trigger to turn the bucket back on yourself, and douse the fire.

Okay, it’s not exactly fire, but it will burn!

Aye. be careful what kind of water you scoop up! Super-Heated water—the bubbling water usually found in the Devil’s Roar near erupting islands—has always been damaging to swim or stand in.

However, now, it can cause damage when thrown from a bucket. This scalding hot water will damage anyone it comes in contact with. This means you can throw it at foes.

It also means that you’ll deal yourself some damage if you use that boiling water to douse your own flames!