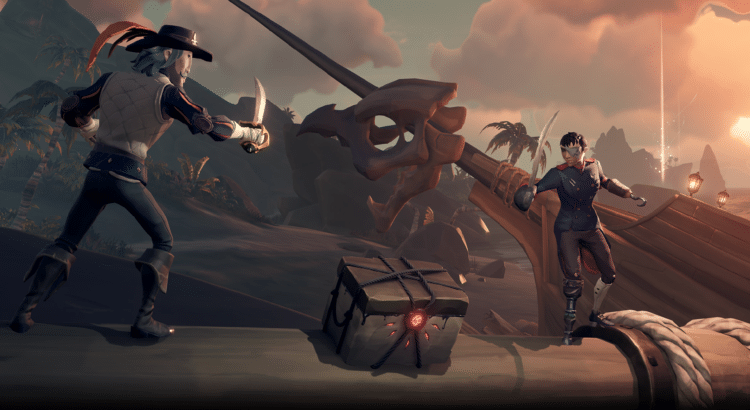 Steeped in lore and magic, Sea of Thieves invigorates the imagination! From the first day we could set sail, pirates have been sharing fantastical speculations for what might one day come to these shores.

One such speculation has come into being: The Reaper’s Chest.

What is the Reaper’s Chest?

While sailing the seas, you often have highly coveted items in your hull, which might induce other ships to attack, if only they knew.

This is one reason why crews on an Athena’s voyage are none too keen on other crews seeing their voyage table. For then those foes—or fair-weather friends—would know that an Athena’s chest will soon be aboard.

Well, no one needs to climb aboard to know if you have a Reaper’s Chest.

The Reaper’s Chest betrays its location, calling to every pirate on the sea!

Where do you find Reaper’s Chests?

Reaper’s Chests spawn in the haunted hulls of wrecked ships.

Why have these chests come to the Sea of Thieves? Does this have anything to do with the Dark Relics? What curse seems to doom any ship with the chest aboard?

Ah, the first two questions have yet to be answered, but we think we know the answer to the third..

How do you find Reaper’s Chests?

There are two ways you’ll know a Reaper’s Chest has come to the Sea of Thieves.

When a Reaper’s Chest appears in a shipwreck, bright lights will burgeon from the waters and reach for Sudds’ stars.

Similar to other calls to contest fellow pirates for treasures—Skull Clouds and Ship Clouds—these lights are not always present, but rather spawn sparingly. How sparingly? We’re not quite sure yet.

We can tell you that multiple often appear at once. Thus far, we’ve seen as many as three at one time.

These swirling lights can be seen throughout the seas—lest your view be cloaked in fog. However, if you’re only looking at the lights themselves, it can be difficult to know just how far in the distance you’ll find its origin.

That is where the next manner of spotting the chests can be quite useful.

If you’re not sure how far away those lights might be, check your map table.

The Reapers Chest will appear on your map as a reaper’s mark beacon.

As the name suggests, it operates very similarly to—but should certainly not be mistaken for—the reaper’s flag.

(If you’d like to jog your memory of how a Reaper’s Flag operates and how it appears on the map, you can take a quick peek at the Black Powder Stash Guide.)

Where did the lights go?

Aye, there is another good reason to use your map table to find those chests. As soon as a Reaper’s Chest is touched, the swirling light skyward lights will vanish, but it will still be visible on your map table.

Thus, if you are heading towards a Reaper’s Mark on the map table and there is no accompanying swirl of lights on the horizon—and there is no fog obscuring your view—then you are most likely following a ship, rowboat, or pirate carrying a reaper’s chest.

For, marked by the reaper’s curse, its beacon will call to all pirates until it is turned in.

Where do you turn in The Reaper’s Chest?

Whether you pull the chest from a shipwreck yourself or pillage the chest from another crew, head to your nearest Outpost! You’ll want to sell the Reaper’s Chest to Duke.

Of course, if you’re spoiling for a fight, you could also sail the seas with the chest aboard, and see who comes your way.

What do you get for the Reaper’s Chest?

Ah! The reason these chests are so coveted…

Each time you turn in a Reaper’s Chest you will earn 25 doubloons.

In addition to those 25 doubloons, there are also several commendations based on the Reaper’s Chest for which you will receive doubloons.

Turning in your first Reaper’s Chest will unlock the “Cursed Cargo” commendation for an additional 10 doubloons.

Upon turning in your third Reaper’s Chest, you will unlock the “Reaping Rewards” commendation for an additional 25 doubloons.

Upon turning in your fifth Reaper’s Chest, you will unlock the “Risking It All” commendation for an additional 50 doubloons.

How might the Reaper’s Chest enrich the pirate life?

Although they arrived with the Dark Relic’s update, the Reaper’s Chests will remain in the game even after the Dark Relics event has ended. So, how might these chests enrich the pirate life?

Emergent encounters bring this wondrous piratical world to life. Sure, you might think you could purchase a voyage, throw it down, dig some chests, turn them in, rinse and repeat.

Suddenly, the waters turn dark. The Kraken Roars! Then, just beneath the roar, you hear the music… Meg? Is that you?

First and foremost, the Reaper’s Chest provides yet another emergent encounter, breathing life into the game. This one luring your crew away from your objective for the thrill of a valuable prize, and the ticklish feeling that either you’re being chased or that a crew might be lying in wait at the nearest tavern—or both!

Naturally, anything of value that all who sail the seas can see begs to incite opposing crews to ship battles and sword fights—like Skull Clouds and Ship Clouds. However, these swirling lights incite a bit more…

Worried this has become a ‘Sea of Friends’? Well, this should test those loose little alliances. Doubloons cannot be shared.

Pirates, Ye Be Warned:
Ye not be sharin’ this chest with yer alliance.
If ye want those doubloons, ye must be the crew to turn in the chest!

Prior to these chests, doubloons were a scarce commodity, available only infrequently. Now, you’ll be able to earn doubloons regularly.

However, you might not want to spend those doubloons all at once. When commenting that this was the first repeatable doubloon reward, a senior producer at Rare dropped this little hint:

“It’s almost like you should be saving up for something…”

With so many doubloons at stake—and not yet knowing how valuable those doubloons might be—you might just take up your good friend Duke’s advice: “Do something daring!”

One thought to “The Reaper’s Chest: Follow the Lights, if you Dare…”