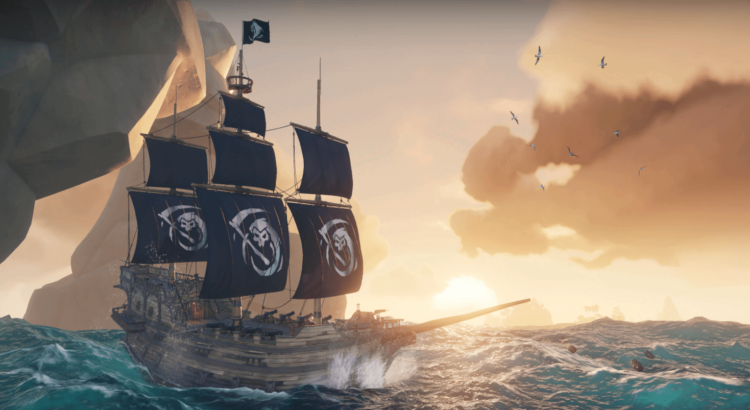 BOOM! Your old friend Duke is now offering explosive adventures! Find Duke in any tavern, and you will discover six different Mercenary Voyages in his stock.

You will also find brand new ship decor designed to strike fear into your enemies’ hearts. Why? Well, you’ll need to prove yourself to unlock these beauties by earning their corresponding commendations.

These cosmetics include the Mercenary Figurehead. Showcase your mercenary mettle with a predatory arachnid poised to strike!

Below we will go over the requirements for earning each of these striking embellishments!

You might also want to collect these cosmetics because they are extensions of the Mercenary and Reaper sets available in previous Mercenary Voyages.

As for these six new Mercenary Voyages, they are part of the Black Powder Stash series. Within these six voyages, there are two types:

Let’s take each type in turn…

There are four different Black Powder Smuggler’s Runs because there is one for each region. Once you have successfully completed each region’s voyage, you will unlock a new commendation and some shiny doubloons!

If you’re not too keen on sailing into the Devil’s Roar, be sure to at least complete the three Mercenary Voyages for the original three regions—The Shores of Plenty, The Ancient Isles, and The Wilds. This will unlock the Master Black Powder Smuggler commendation, fill your pockets with 25 doubloons, and allow you to purchase the Mercenary Figurehead shown above.

When you vote on a Black Powder Smuggler’s Run Mercenary Voyage, you begin a two chapter voyage. The first chapter will have three different x-marks-the-spot quests. Each of the islands for this chapter will have two to three X’s to find and dig.

The pictures below are examples of three x-marks-the-spot quests you might receive.

What treasure lies buried beneath those X’s? Not chests…

For the first time in the Sea of Thieves, it seems pirates have been hiding away their merchant crates. You will be digging up hidden stashes of valuable trade goods: everything from Rare Teas to Exotic Silks to… stashes of Black Powder!

The second and final chapter will have one x-marks-the-spot quest. However, beneath this X you are guaranteed to find a Stronghold Gunpowder Barrel!

Finding merchant items buried in the sand isn’t the only twist that these new voyages bring. Trouble seems to be brewing in these tempestuous seas, and the outpost trading companies are eager to stockpile as many gunpowder barrels as possible.

If you are a pirate legend, you can also sell your gunpowder barrels to the mysterious stranger to increase your Athena’s reputation!

With merchant crates buried, might there be someone or something blocking trade routes?

If there is such a threat, is it the reason for this gunpowder barrel arms race?

We truly have no idea, but we’d love to read anything your imaginations concoct in the comments below!

Level Up! Whatever the reason, the happy consequence is that these new Mercenary Voyages will help you level up any of the three Outpost Trading Companies in which you might still be shy of that legendary level 50.

Congratulations, me hearty! There is still good reason to sell your gunpowder barrels strategically.

There are commendations to unlock—and doubloons to be earned—for selling gunpowder barrels to each of the three Outpost Trading Companies. So, be sure to keep track of your progress as you sell your loot to each.

The Black Powder Smuggler’s Run of The Wilds

The Wilds Mercenary Voyage will have you digging up merchant items on islands such as The Crooked Masts, Kraken’s Fall, Marauder’s Arch and Sunken Grove. Completing it will unlock the Black Powder Smuggler of The Wilds commendation for 10 doubloons.

The Black Powder Smuggler’s Run of The Ancient Isles

The Smuggler’s Run in The Ancient Isles will have you digging up merchant items on islands such as Crook’s Hollow, Devil’s Ridge, Snake Island and Shark Bait Cove. After digging up the Stronghold Gunpowder barrel you will unlock the Black Powder Smuggler of The Ancient Isles commendation for 10 doubloons.

The Black Powder Smuggler’s Run of The Shores of Plenty

This Smuggler’s Run will have you digging up merchant items on islands such as Crescent Isle, Cannon Cove, Lone Cove and Mermaid’s Hideaway. On completion you will unlock the Black Powder Smuggler of The Shores of Plenty commendation for 10 doubloons.

If you do manage to complete the voyage, you will unlock the Black Powder Smuggler of The Devil’s Roar commendation for 10 doubloons.

Although the Devil’s Roar awards the same number of doubloons as the other regions, there is more to lure you into those boiling waters.

First, the Pirate Legend Smuggler’s Run voyage within Devil’s Roar offers higher value loot. More of the merchant crates are the higher value “ashen” crates. Plus, there are two Stronghold Gunpowder Barrels on your final map!

Second, while the thought of volcanoes might scare you away from this more challenging Smuggler’s Run, this voyage will steer your ship clear of any forts that are part of the Reaper’s Black Powder Runs.

The Reaper’s Black Powder Runs will have you completing a four chapter voyage that takes you to four forts. Yes, forts! For the first time in Adventure mode you and your crew will receive x-marks-the-spot quests that take place on the formidable skeleton forts scattered across the Sea of Thieves.

These are reapers voyages. This means you will need to complete these voyages while flying your reaper’s mark flag!

Not all pirates are well-acquainted with the mischievous little flag aboard their ship. Not to worry! We’ll give you a little rundown.

What does this Reaper’s Mark Flag Do?

The reaper’s mark flag is essentially a means of throwing a gauntlet down—daring every pirate on the seas to meet you in battle!

How Do I equip this Reaper’s Mark Flag?

Climb to the top of your crow’s nest. There you will find your “ship flag box.” Open that box, then find and select the Reaper’s Mark flag shown above.

For this reaper’s voyage you will be traveling eastward. However, this means you will actually begin in the West!

The Reaper’s Black Powder Run to the East will start at Keel Haul Fort in the North West of the Sea of Thieves and end at The Crow’s Nest Fortress found in the South East.

As you’ve likely guessed, for this reaper’s voyage you will be traveling westward—beginning in the East.

The Reaper’s Black Powder Run to the West will start at Shark Fin Camp in the North East of the Sea of Thieves and end at Sailor’s Knot found in the South West.

In line with the cryptic underlying lore—like the Smuggler’s Runs—you will be digging up valuable merchant crates and gun powder barrels.

There be whispers in the wind—or in the taverns really—from those who claim to have made this very voyage. Perhaps it’s all bluster. Perhaps these pirates only be tellin’ ye tips ye already know. Then again, perhaps these are worth mentioning lest you—or an otherwise seaworthy crewmate—forget a few minor details when gold be on the horizon.

Tell-the-Tale Tip #1: Wait to Raise your Reaper’s Mark Flag—and vote on your voyage—until AFTER you have already sailed to the First Island.

For most voyages in the Sea of Thieves, you have no way of knowing where you will be heading until you actually vote on the voyage. However, for these reaper’s voyages, you know the island on which each will begin without voting on the voyage.

Step 4: Vote on your reaper’s voyage.

Tell-the-Tale Tip #2: Form Alliances Before you Raise your Reaper’s Mark Flag—and never after!

You must have to have your Reaper’s Mark flag up during the entire voyage to get credit for the commendations.

So, if you would like to make common cause with other ships at sea, you will want to do so either while you are sailing from the outpost to your first island, or when you first arrive at the island.

Most importantly, be sure that you do not try to make an alliance after your Reaper’s Mark flag has been raised.

Now that you are digging up gunpowder barrels, it will be very important to listen for skellies nearby.

If you are digging up a gunpowder barrel and you hear skellies, stop digging! Lure the skeletons away from your gunpowder barrel, and scatter their bones back into the dirt.

After all, you don’t want one of those pesky skeletons to take a swing at you, miss and hit your beautiful treasure!

Tell-the-Tale Tip #4: Get Gunpowder Barrels Wherever You Can!

Gunpowder barrels are strewn throughout the Sea of Thieves! If you are doing the reaper’s voyages, you’re in luck! Skeleton forts have far more gunpowder barrels than other islands.

If you’re not doing the reaper’s voyages, take a look at your map table. If there’s no reaper’s mark ship at a fort, it might be uninhabited. Sail on over! If there are no other ships around, you can take your time pillaging the fort for every last barrel!

Tell-the-Tale Tip #5: Be Wary of Storms.

Many pirates prefer to store their gunpowder barrels in their crow’s nest. Often that is a fine strategy.

After all, if an enemy comes along and shoots your barrels, at least you don’t risk losing your ship.

However, if you sail into a storm, the crow’s nest is a rather volatile place fo your gunpowder barrels. One lightning strike and you could lose them all!

Here are a few possible solutions…

You could avoid sailing in storms.

This might mean taking a longer route. It might also mean keeping a weather eye out to see if a storm might reach your next destination at the same time as your ship.

If you see a storm headed for your next location, you might take a bit of a fishing break, explore a shipwreck, turn in the loot you’ve found thus far, or otherwise pass the time until the storm has moved on.

You could risk having the barrels in your hull.

Of course, this comes with the pitfalls mentioned above. However, if you do not see another ship close on the horizon—or if you think yer yellow-bellied pursuers might not have the guts to put their gunpowder barrels below deck—this risk might just be your best bet.

You could try your luck in a rowboat.

Of course, you would still want to avoid the storm. However, if other ships are a bit too close for you to feel comfortable with that much TNT in your hull, you might have a crewmate discretely row those barrels to safety.

Hopefully, with this handy guide you won’t be needing quite as much luck to make the most of your Bilge Rat Adventures. As always, if you have any questions, feel free to comment down below. We’ll do our best to find you some answers. Fair winds, me hearties!