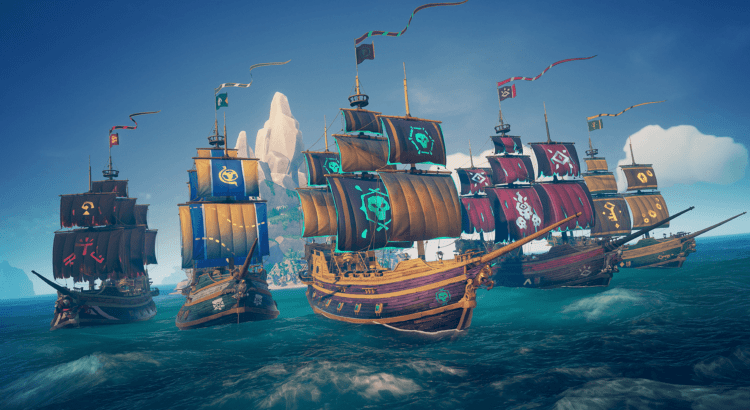 Captain Flameheart’s looming presence is taking its toll. As fear and paranoia creep across the seas, a hush has fallen over the once bustling Outposts.

Desperate and undaunted, the Outpost Trading Companies have devised a plan to rebuild their trader’s confidence. They’ve established an Emissary service.

The Outpost Trading Companies are calling on the bravest pirates to serve and represent their companies.

Why would I want to Represent the Trading Companies?

For those who laugh in the face of danger and agree to help the Trading Companies prosper, the representatives of each Trading Company will provide handsome rewards—in both gold and glory!

Within the Gold Hoarders, Order of Souls, and Merchant Alliance, pirates can now climb the ranks through an additional 25 levels—maxing out at Rank 75.

Athena’s Fortune has also offered greater room for distinction with an additional 10 levels—maxing out at Rank 20.

Even us Pirate Legends will once again receive that hearty gratification that only comes from seeing that reputation climb.

Ah! Separate from your Trading Company Reputation, this is an entirely new way to prove—and be compensated for—your loyalty.

As we worked to describe the Emissary Grade and answer questions we thought likely to arise, we realized that we needed to separate this discussion into its own separate article.

If you are more of a learn from watching kind of pirate, you can get caught up on everything you need to know about Emissary Grades in the video below!

Fame with your Fortune

The Trading Companies will be documenting pirates’ deeds in their service. Periodically, they will announce which pirates were their most valuable Emissaries.

This is a chance for your name to ring out across the seas!

Unlike anything we’ve yet experienced on the Sea of Thieves, we feel the Emissary Ledger deserves an entire article unto itself: Trading Company Emissary Ledgers.

Ah, let’s say you come across a pirate who has not heard tell of your valor. Aye, some pirates just don’t listen so well.

Never you mind. There are other ways to command respect on sight.

The Trading Companies are prepared to offer visible manifestations of your bravery and prowess.

Whether by advancing through a Trading Company’s expanded levels, unlocking their newly added commendations, or by securing an impressive standing on the new leader boards, you’ll be able to deck your pirate and your ship in the trappings of your achievements.

What is an Emissary?

The Trading Companies of the Sea of Thieves are looking for worthy pirates to serve and represent their company with pride!

Serving as an Emissary

If you so choose to be an Emissary for one of the Trading Companies, you can still go about your life on the seas in any manner you choose.

However, to make the most of your time as an Emissary, you’ll likely want to prioritize that Trading Company’s quests and treasures.

Trading Companies will reward their Emissaries in an increased Emissary Grade for completing actions specific to that Trading Company.

For example, let’s pretend you decide to represent the Gold Hoarders. You would be rewarded for acts in their service—such as completing x-marks-the-spot or riddle quests.

Of course, you might receive such quests from a random message in a bottle, an Athena’s Voyage, or even perhaps a Bilge Rat Adventure.

However, if you want to maximize your progress, you’ll likely want to throw down some Gold Hoarder Voyages.

Trading Companies will reward their Emissaries in far more gold and reputation than usual for any treasures returned to that Trading Company.

Of course, it’s best to turn in all the treasure you stumble upon, but there are times you might want to pick and choose.

Perhaps you sneak onto another ship. If stealing all of their treasure isn’t an option, you might want to prioritize the treasures that will fetch the most with your Trading Company.

Perhaps you decide to play nice with another crew at an active Skull Fort. If you’re representing different Trading Companies, splitting the loot might be a bit easier.

Don’t be shy! The Trading Companies are looking for pirates who will display their allegiance with pride.

You now have a basic idea of what it means to be a Trading Company Emissary.

There’s more to know about these flags and garments—and we will address them each below. However, that knowledge is of little use until you know the following: how do you become an Emissary?

How to Become an Emissary

Ah! Not every pirate will be eligible to serve as an Emissary. After all, the Trading Companies don’t exactly want to be represented by a pirate just learning to raise their anchor.

Only one member of the crew needs to have this eligibility. So, you can team up with higher level pirates, until you’ve earned the eligibility yourself.

Luckily, if you and your crew are just starting out, it won’t take much to prove your mettle. The Gold Hoarders, the Order of Souls, and the Merchant Alliance only require you to be at least Rank 15 within their company before they’ll allow you to join their Emissaries.

Yo Ho Ho! There is one Trading Company that will gladly conscript any and all pirates into their evil enterprise: The Reaper’s Bones!

In addition to these eligibility requirements, you must be willing to part with a bit of coin…

Aye, the adage holds in the pirate world, too: ye must spend gold to make gold. Savvy?

For the Outpost Trading Companies—Gold Hoarders, Order of Souls, Merchant Alliance, and Athena’s Fortune—visit one of their representatives on any Outpost to purchase this Emissary Flag.

You can purchase the Reaper’s Bones Emissary Flag from the representative on The Reaper’s Hideout.

These Emissary Flags will cost you 20,000 Gold Coins—but that’s nothing you can’t make back in a Fort.

Besides, you only need to purchase the Emissary Flag once. After your initial purchase, you can choose to represent that Trading Company for the rest of your pirate career!

Upon visiting each Trading Company Representative you will now see a nearby Emissary Table.

As such, each Emissary Table shows how many ships on the sea are sailing under their Trading Company’s Emissary Flag. Each ship is represented by a tiny wooden boat.

If you’re not sure which Trading Company you’d like to join, you might take a quick look at each Emissary Table before making your decision.

If you and your crew feel like finding an alliance, you might join a Trading Company that already has a few wooden boats set out. Hopefully, you’ll find them out on the seas.

If you and your crew feel like you might want plenty of PvP prey, you might ensure the other Trading Companies have a few boats before joining The Reaper’s Bones.

Vote at the Emissary Tables

Simply approach the Trading Company’s Emissary Table, and a prompt should appear.

Note: similar to equipping your sails with the Shipwright, your ship must be near The Reaper’s Hideout or the Outpost to successfully cast your vote.

You also cannot be representing another Trading Company, when you try to vote. One at a time, me hearties.

What Happens After We Vote?

First, you should notice a little wooden boat added to the Emissary Table; that’s you!

Next, if you turn to look at your ship, you’ll notice that the Trading Company has already hoisted your Emissary Flag. How kind of them.

If you choose to become an Emissary for The Reaper’s Bones, something else will occur upon casting your vote. Your ship—and your Emissary Grade—will appear on every ship’s map throughout the seas!

Before you set sail as an Emissary, you might want to dress the part.

We got our first taste of Costumes in the Sea of Thieves thanks to the Pirate Lord and his Athena’s Run Voyage.

The Trading Companies have now expanded upon this idea. Each Trading Company has designed a costume to make you look and feel like one of their own.

It is not necessary to wear these costumes every time you serve as an Emissary. Though, feel free to do so…

However, there are certain commendations for which it will be necessary to don your Trading Company costume whilst you sail under that Emissary Flag.

However, it is worth mentioning a reason you might want to reach Grade 5—or target ships flying Grade 5 flags.

Reaching Emissary Grade 5 with Gold Hoarders, Order of Souls, Merchant Alliance, or Athena’s Fortune will unlock access to a high-reward Emissary Quest from that Trading Company.

How do I receive my Emissary Quest?

Visit any representative for the Trading Company in which you’ve achieved Emissary Grade 5. Upon approaching the representative, you’ll see the option to claim your Emissary Quest.

After you claim it, the Emissary Quest will appear in your Map Radial.

What is the Emissary Quest?

As you might imagine, the Emissary Quest is different for each Trading Company.

The Order of Souls Emissary Quest

The Order of Souls Emissary Quest consists of four Bounty quests. For each Bounty quest, there will be four Skeleton Captains—each with a Villainous Skull.

The Merchant Alliance Emissary Quest will grant you one Cargo Run quest. Only one? Aye, but that’s the beauty. You’ll be able to turn in 25 Cargo Crates in one go!

The Athena’s Fortune Emissary Quest is a condensed Athena’s Fortune Voyage with three quests: a riddle quest, a X Marks the Spot quest and a Order of Souls Skeleton Bounty quest. The treasure you find in these Athena quests will include the Ancient Fortune treasure debuted in the Athena’s Run Voyage!

Not only are these treasures highly valuable, they will help you rank up in the Athena’s Fortune Trading Company.

The Reaper’s Bones do not have an Emissary Quest.

Instead, upon reaching Grade 5, your crew unlocks the ability to see every Emissary Ship at sea on your ship’s map table.

The Importance of Your Emissary Flag

Your Emissary Flag is highly valuable to you and to anyone who might capture it!

Voting to Lower your Emissary Flag

Ideally, you’ll return to the Emissary Table victorious in your exploits, and your crew will vote to lower your Emissary Flag.

When you vote to lower your Emissary Flag, you will automatically cash it in with the Trading Company. Your level of compensation will be commensurate with the Grade you achieved during your time as their Emissary.

If your ship is sunk, your Emissary Flag will break off your ship, and float to the surface.

You will no longer be an Emissary.

This means you will need to return to an Emissary Table and vote to become an Emissary again. It also means your Emissary Grade will restart at zero.

If you recover your Emissary Flag, you can still cash it in with the Reaper’s Bones, but you will only receive a small fraction of the gold and reputation you might have otherwise received.

Worse, separated from your ship, your broken Emissary Flag can now be stolen! Reaper’s Bones Emissaries are promised handsome rewards for any stolen Emissary Flags they can return to the Reaper’s Hideout.

While you can still expect loot turned in from an Alliance crew to grant you some gold, Alliances cannot help you level up your Emissary Grade. Your Emissary Grade will only go up based on actions from yourself and your crew members.

Handing in an Emissary Flag will also only grant gold and reputation to your crew and not to your Alliance.

How to raise your Emissary Grade?

As we have mentioned before, raising your Emissary grade is all about actions performed related to the Trading Company you are representing.

How to climb the Emissary Ledgers?

If reading about fame earlier put butterflies in your stomach, you’ll want to explore our Emissary Ledgers article. You’ll need all the help you can get if you are going to compete with all those other fame thirsty pirates sailing the Sea of Thieves!