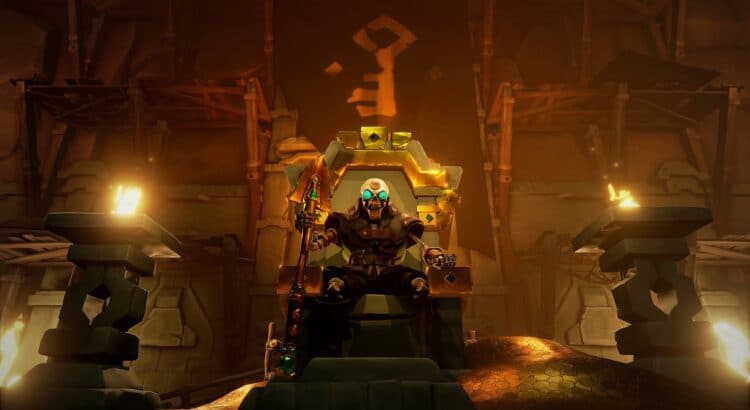 You’ve made it! You have found all the missing stones to the Shroudbreaker and are now ready to sail to the Shores of Gold!

Beware:
for those trying to solve the Tall Tale themselves
This Guide Contains Spoilers!

The Shores of Gold Tall Tale: Step by Step

As Sandra the Shipwright from Dagger Tooth Outpost mentioned, we must head to Morrow’s Peak Outpost in the Devil’s Roar. We will seek advice from Gracie who resides there. Gracie is one of the only living pirates to use the Shroudbreaker and live to tell the tale!

Head to the tavern on the Outpost and you will spot Gracie standing just outside. Sitting next to her is the Tall Tale book. Vote on it to have it added to your Map Radial and let Gracie tell you a story. 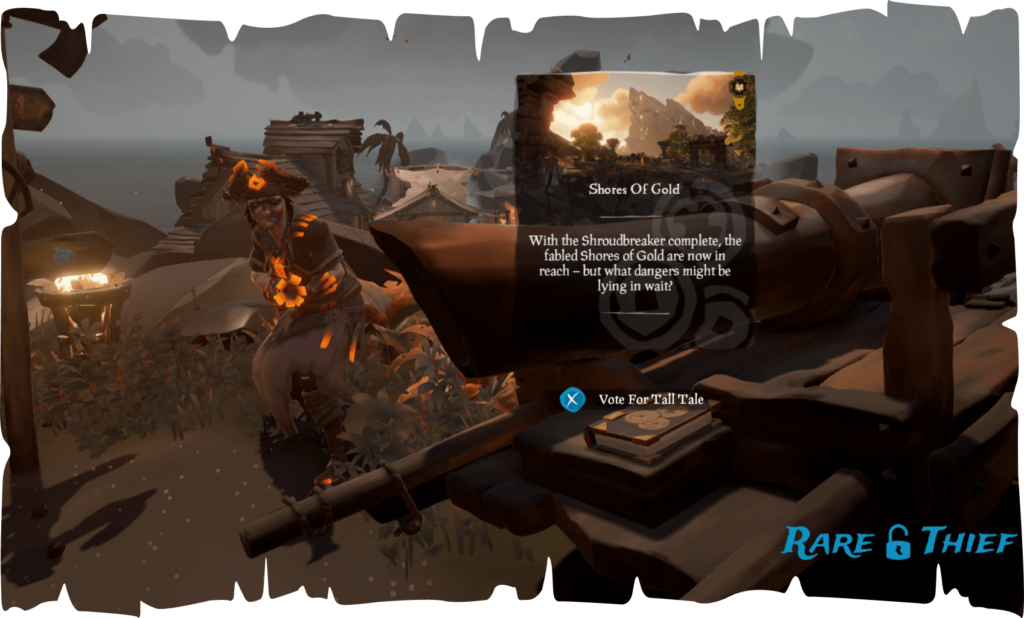 Step 2 – Reach the Shores of Gold

You now have the Shroudbreaker and are ready to sail to the Shores of Gold! The Shroudbreaker will automatically be added to your ship. You can find it strapped at the helm near your ship wheel. 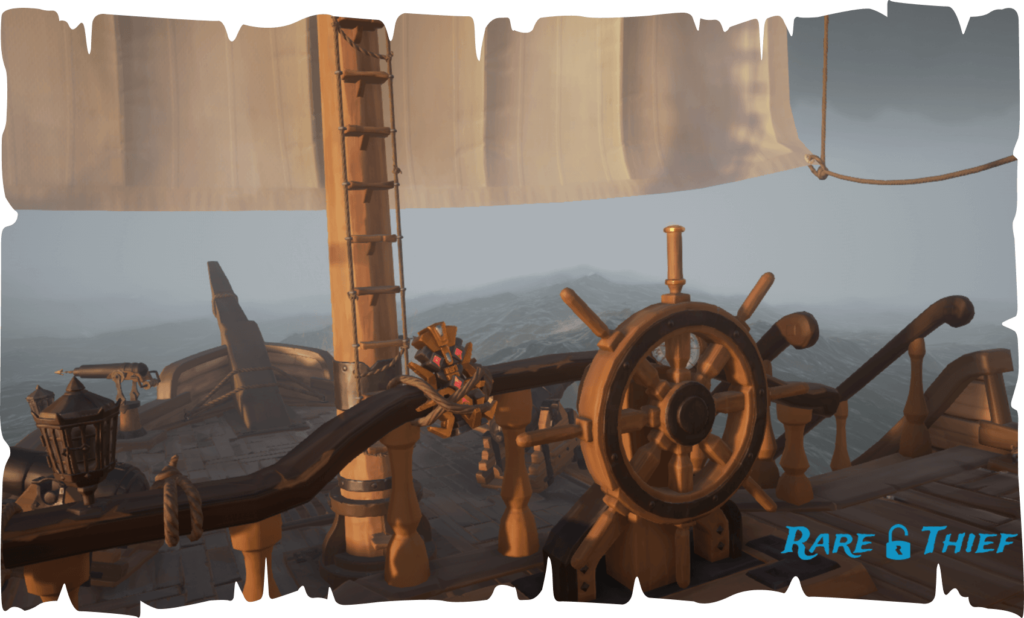 Jump on your ship and head straight North from Morrow’s Peak Outpost. You will want to aim for Y3 on the map. This is where the giant island that is Tribute Peak will be. With the Shroudbreaker equipped to your ship, you will have no problem sailing through the Shroud to the Shores of Gold.

As you get closer to Y3, the island you are destined for will slowly come into focus. Once you arrive and step on land you will unlock The Fabled Island commendation.

Your first step once on Tribute Peak is to solve four puzzles. There is a puzzle for each of the four vaults found on Tribute Peak. Each one is different from the last and will require different solutions.

Solving the puzzle in a vault will present a hidden vault token. You will be collecting these tokens as you will need one from each of the four vaults to proceed into the belly of the island!

The vaults on the island can be found inside the base of the giant rock formations located at the tips of the South, West, North and East sides of the island. You will find a cave entrance at each that will lead down to the vault for that side of the island. 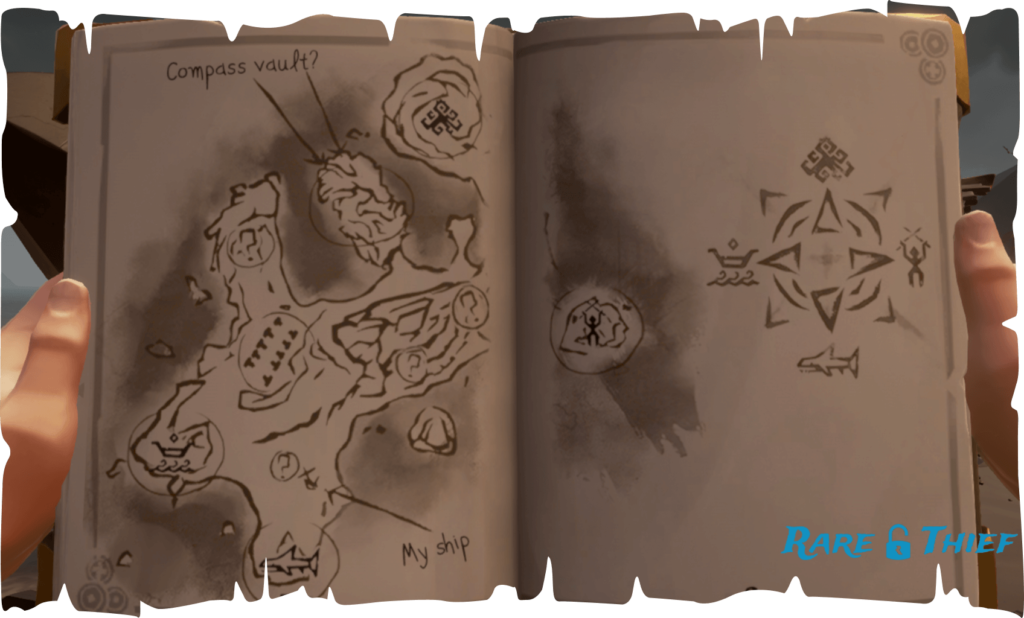 This vault might seem somewhat familiar from your adventures doing the very first Tall Tale: the Shroudbreaker.

Similar to the Shroudbreaker vault puzzles, the Southern Shark Vault requires you to rotate blocks to match the symbols in your Tall Tale book. For this Tall Tale, you’ll find these symbols on the Southern Vault page. There will be three circles, grouping together four symbols.

For each circled group, you’ll rotate the blocks to show those symbols and enter your solution. Kind of… 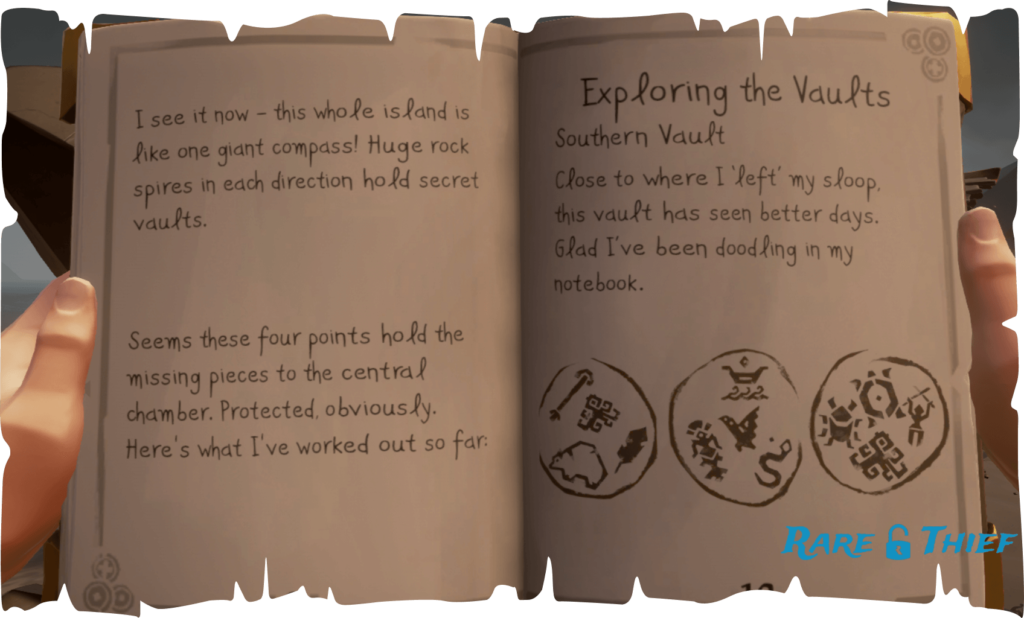 There are two tricks for this vault to keep in mind that will make your time a little more difficult.

The second trick is that you can only use a symbol once. So, for example, in the picture below we see an arrow, a kraken, a feather, and a bear.

Pillar #1 has four symbols, but might only have two symbols that match that grouping: an arrow and a bear. Which symbol do you use? 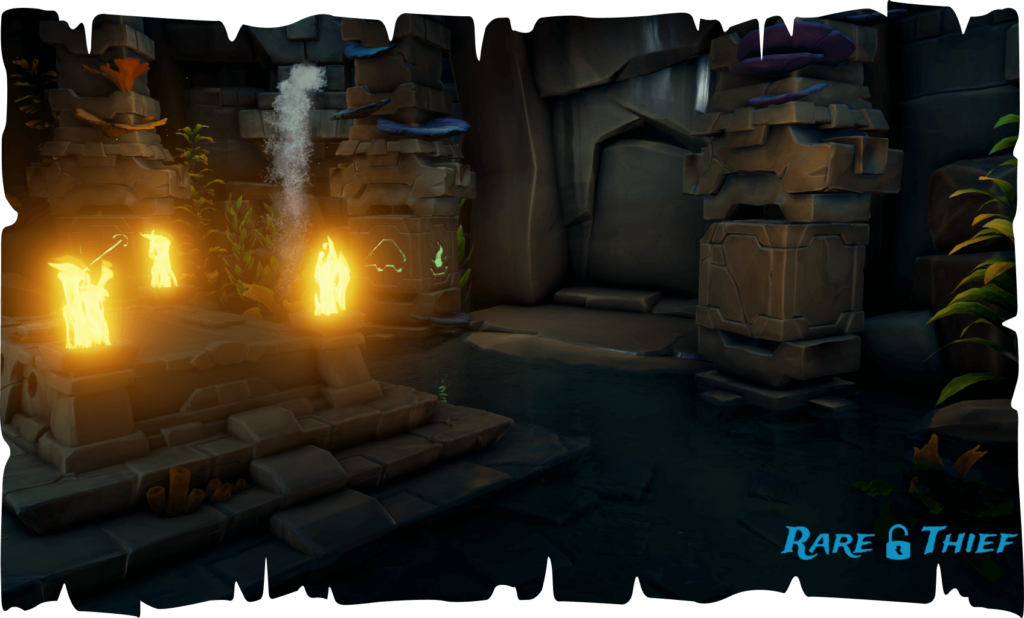 Once you have successfully entered the three symbols for all three groups, you will acquire the Shark Token. 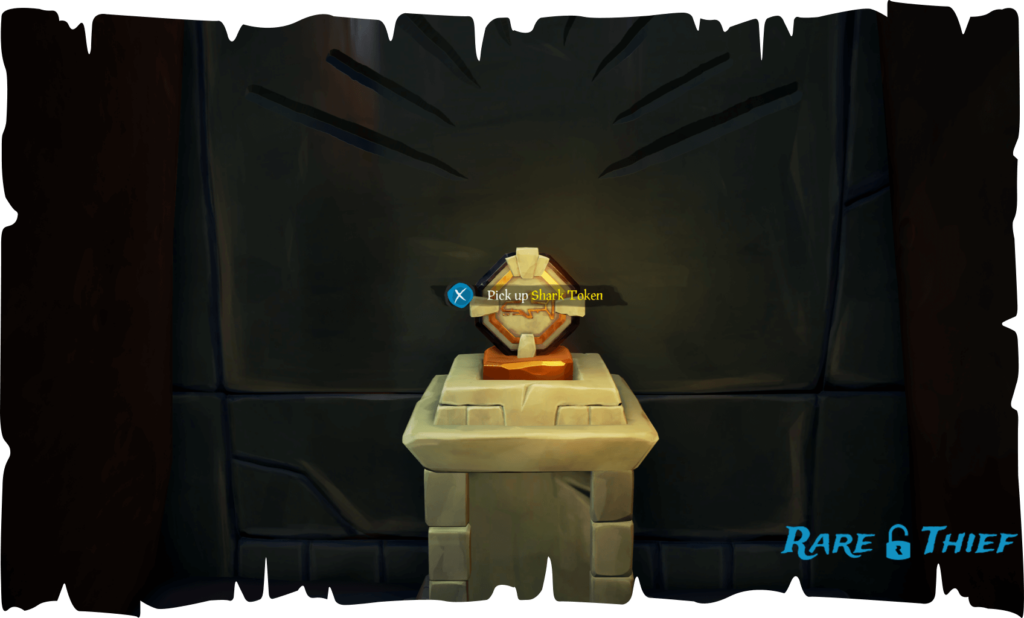 This vault will have a picture of Tribute Peak in the altar. 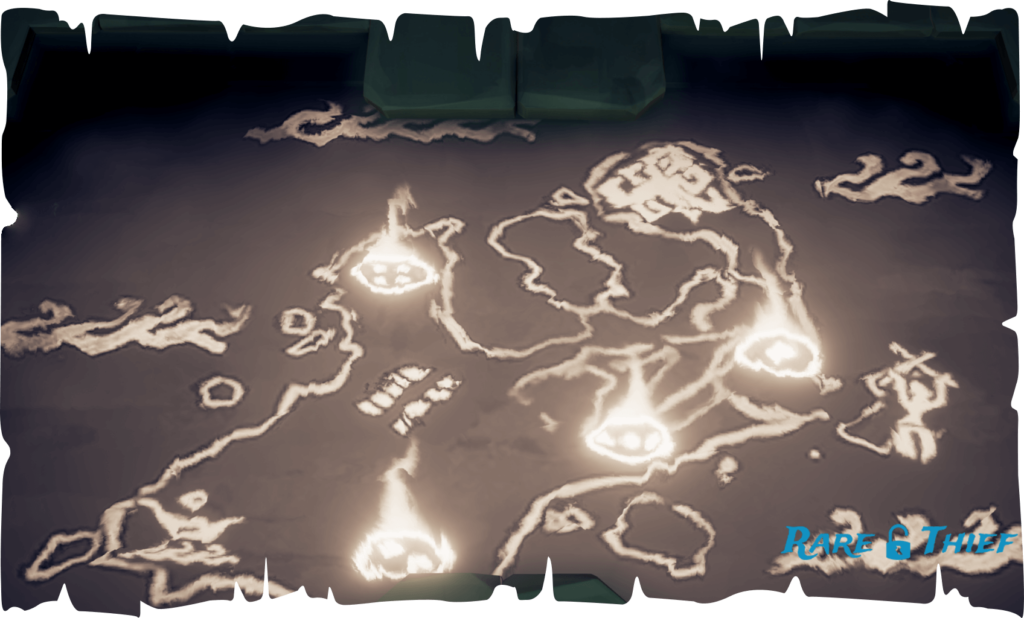 There will be four circles on it, each with one to four little dots in them. The dots represent which column they belong to, left to right.

You must visit each of these circles on the physical island to find what symbol they represent. Some require you to stand on a pressure plate to reveal a hidden panel that has the symbol on it, others are just visible for you to take note of.

Head towards the North of the island. You will make your way up a rock formation with a stone torch on it. Stand on the pressure plate there and look to the South East. You will see a rock emerge from the water with the symbol you are looking for on it.

Head to the location next to the shipwreck. You will see an ancient statue there with two levers on either side. Interact with both to have the middle panel present itself with the symbol you need.

This third one will have you climbing up the middle of the island as you were going to the Compass Vault. But about halfway through the path to the right you should see a pressure plate to stand on.

Stand on this and look to the South. You will see a stone come out of the ground. On the other side of the stone is the symbol you need. The stone is timed and will go back into the ground so you only have a short time to run down and see the symbol.

You will make your way to the fourth location and find a structure in the middle with several smaller structures around it. Walk down to the middle room and pull the lever on the left. It will make the panel in front of you drop a little bit.

You should now see an image showing which of the smaller structures around you is the one that contains the symbol you need. Head to that structure and interact with it to get your symbol.

Once you find all four symbols on the island, head back into the Western vault and enter them in the corresponding block.

Enter the solution and the Kraken token will reveal itself.

The East vault will have you constructing a key with the pillars and blocks. Each pillar will have a block that has a piece of a key on it to form the complete key. 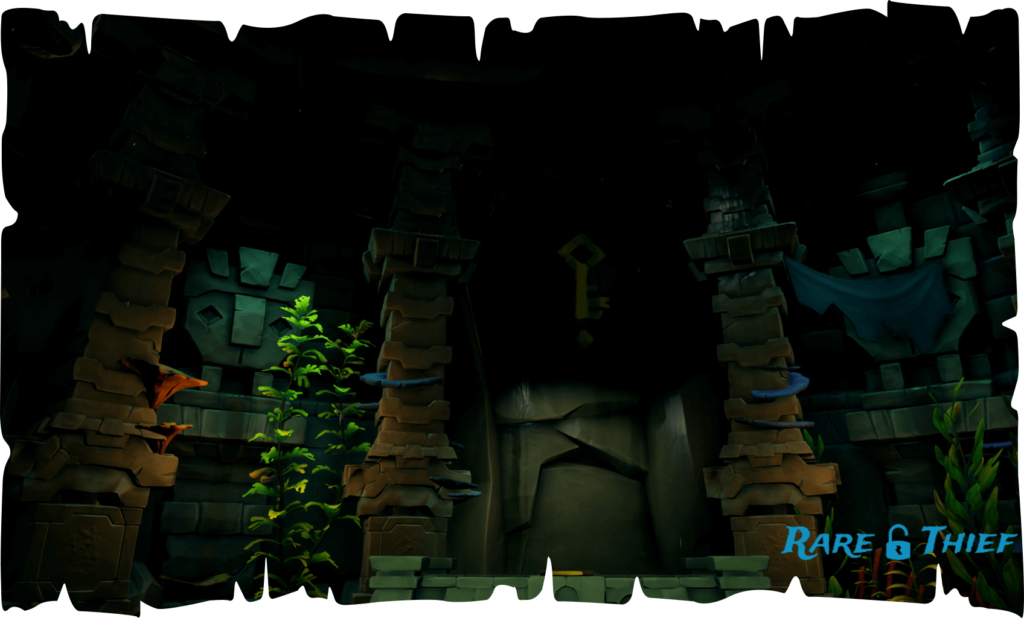 Before starting the vault, visualize the key shown in the room and break it up into four pieces. There is a picture of the key you will be building with the blocks in the center of the room for reference.

You will be putting the base of the key on the right most pillar and the tip of the key, being the one small dot on the left most pillar. The middle two blocks will fill in the rest of the key. Below are pictures of what each block should have from left to right:

Start the vault and form the key with the blocks. Enter your solution back at the altar and grab the Shark token that is revealed before heading out to the next vault.

The North vault is going to keep you on your toes. While you try to solve the puzzle, spikes will continuously pop up and try to kill you.

The key to this puzzle is that you must enter the same symbol on each block. Some of the blocks do not have a particular symbol so you must inspect each one and keep track of the common one between them.

Once you find which symbol is on all four of the pillars, rotate them to the front and enter the solution. Do this again and retrieve your Warrior token.

Now that you have all four tokens you will want to take them to the Compass Vault. This vault only has one access path. Head to the center of the Southern part of the island to find the path up. 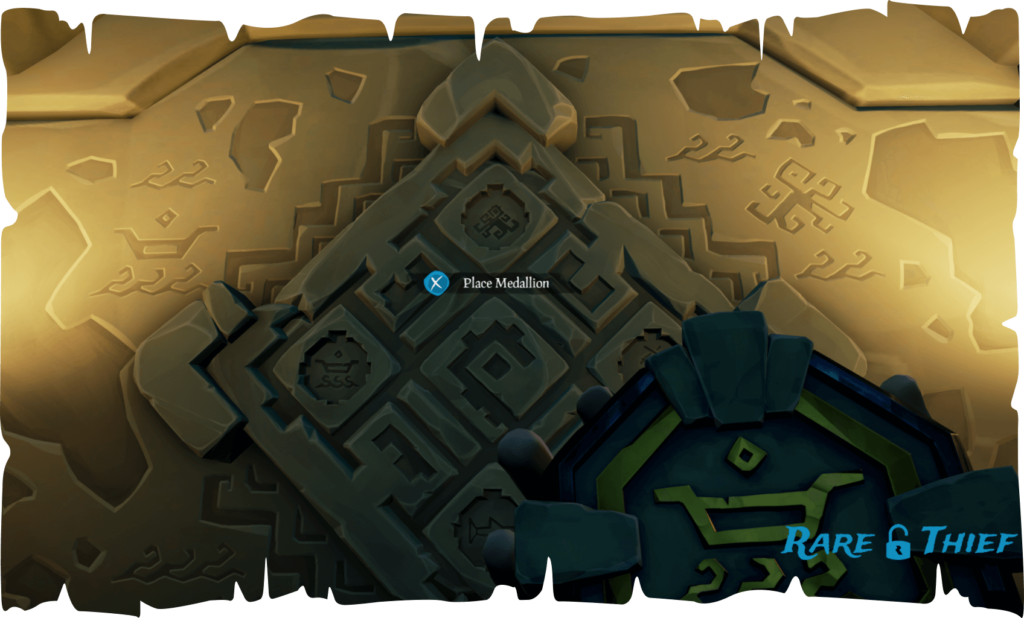 Putting all four tokens into the door will unlock the Gold Hoarder’s Coin. Take this coin to the row of giant ancient thrones. 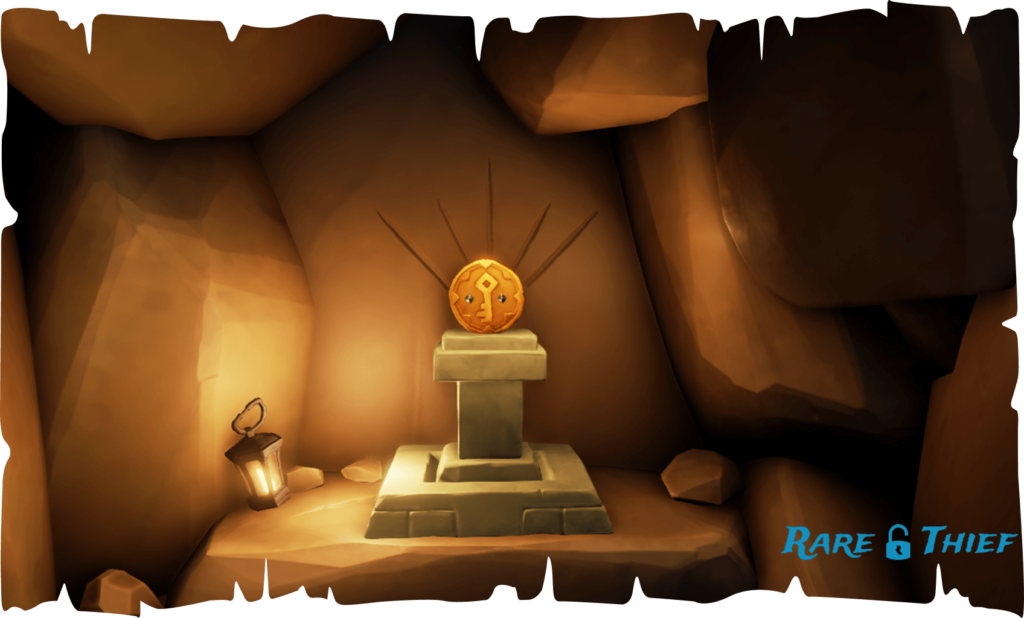 Unlocking the Gold Hoarder’s Coin will unlock the Path to Forsaken Fortune commendation.

To the North West side of the island you will find a row of large statues. These statues are of ancient thrones! Bring your Gold Hoarder’s Coin here and find the ancient throne that is missing its head. This throne leads to the entrance of the tunnels below the island. 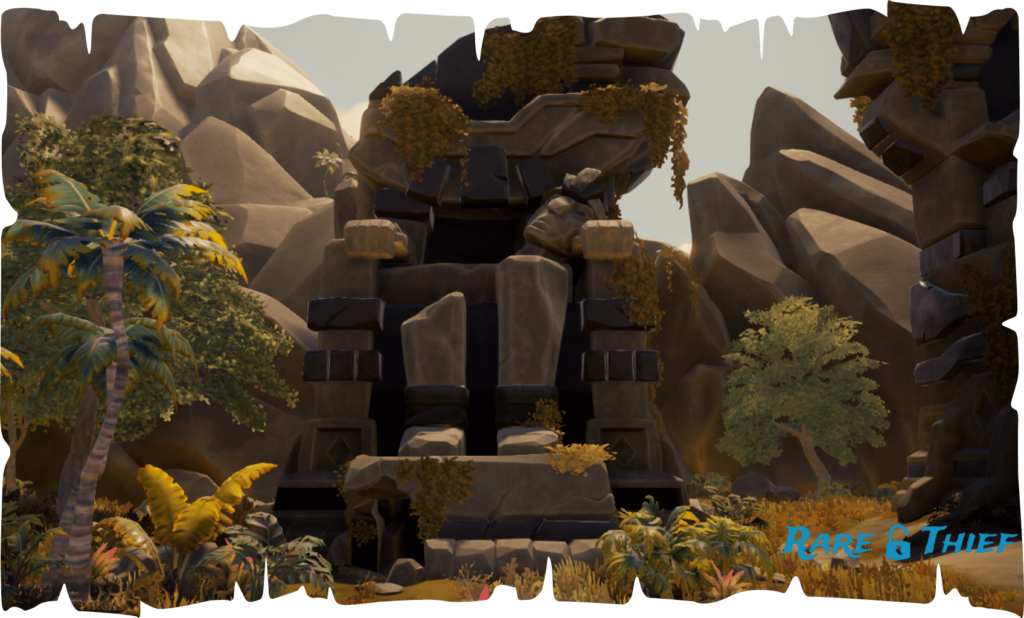 At the base of the beheaded throne will be an opening to a door. You will notice that the door inside the throne is blocked. We must get in from the top of the throne and unlock the door from the inside as mentioned in the Tale book.

Pull your boat to the North side of the island. You will find a waterway into a cove near the ancient thrones. Line up your cannons so you can shoot yourself onto the broken throne.

Once on top of the ancient throne you can fall into it and pull a lever to open the door. Grab the Gold Hoarder’s Coin and follow the tunnels below. Place the coin into the key slot to unlock the next section of Tribute Peak. 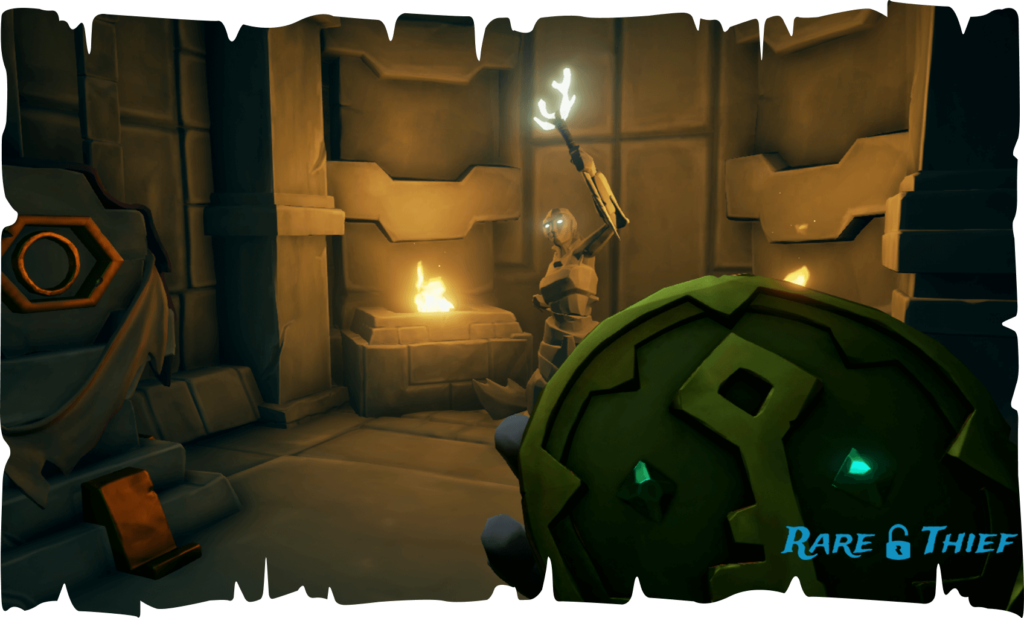 The next stretch of your adventure will involve lots of traps, skeletons and jumping sections. 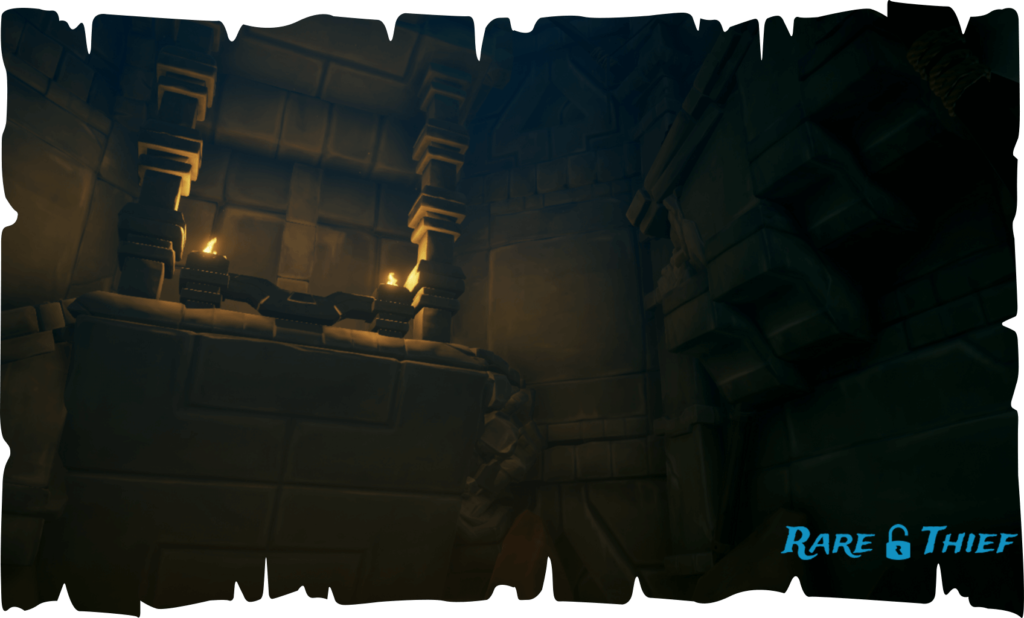 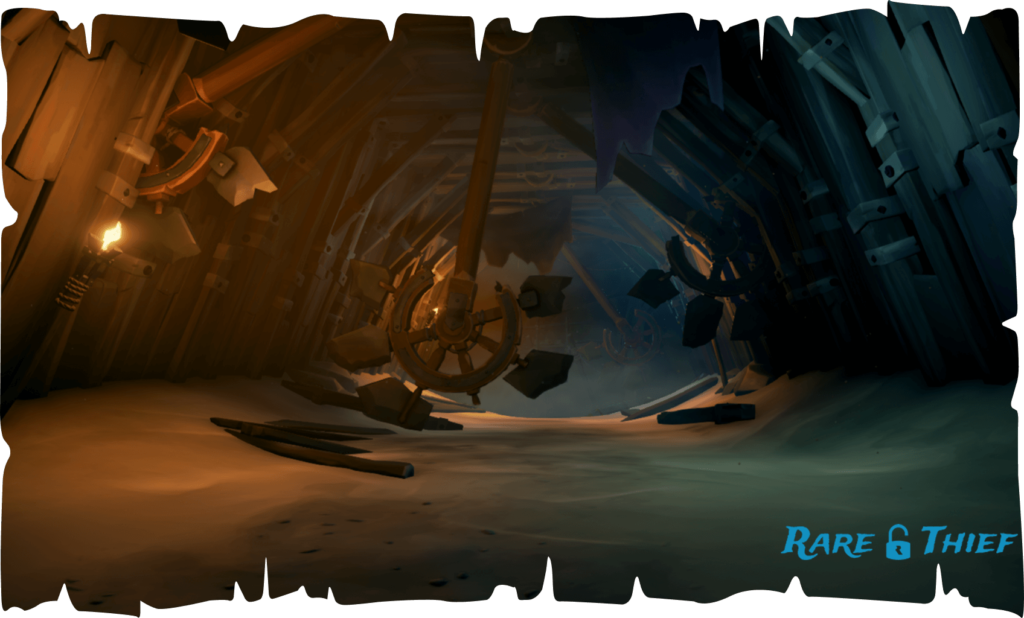 Each capstan you see will be necessary to lift as it will either open up a path or unlock a door.

One room you enter will have dozens of traps on the floor and will require you to interact with three levers to move onto the next room.

Once you have made it past the traps, platforming and skeleton captains you will finally enter the final room where the mighty Gold Hoarder awaits you. 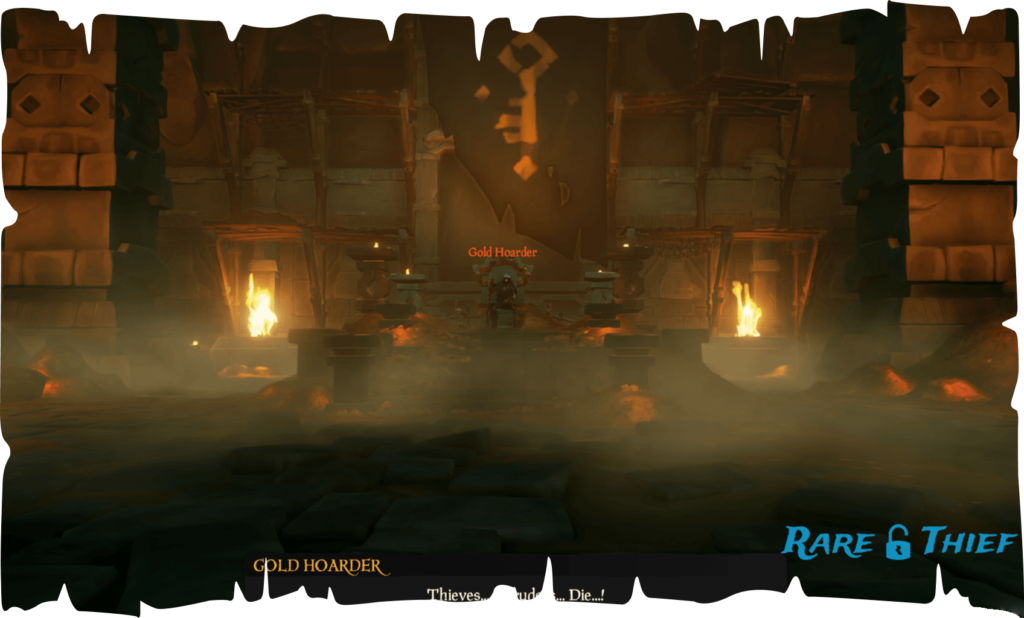 This is a grand battle that will put the toughest of pirates to the task.

Similar to Briggsy and Graymarrow, Gold Hoarder has three special moves up his sleeve. One teleport, one summoning and one ground slam.

The Gold Hoarder will also use his cutlass and flintlock against you.

There are plenty of barrels scattered across the room to gather fruit from for the long battle.

Once you defeat the Gold Hoarder, the Pirate Lord himself will appear and you will have completed the Shores of Gold. 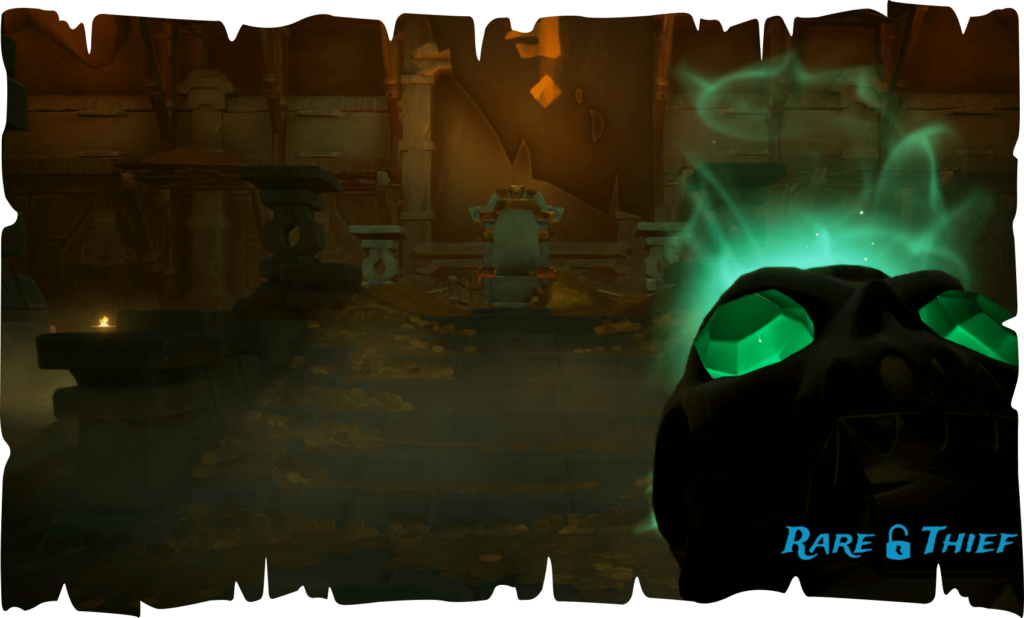 You can take the Gold Hoarder’s skull back to any Order of Souls tent to sell it for a huge sum of 10,000 gold.

Congrats on completing the Shores of Gold! Your Tall Tale adventures are not over yet though. There are plenty of commendations to get and journals to find with extra lore.

If you need some help finding any of the journals, be sure to check out our guide here!