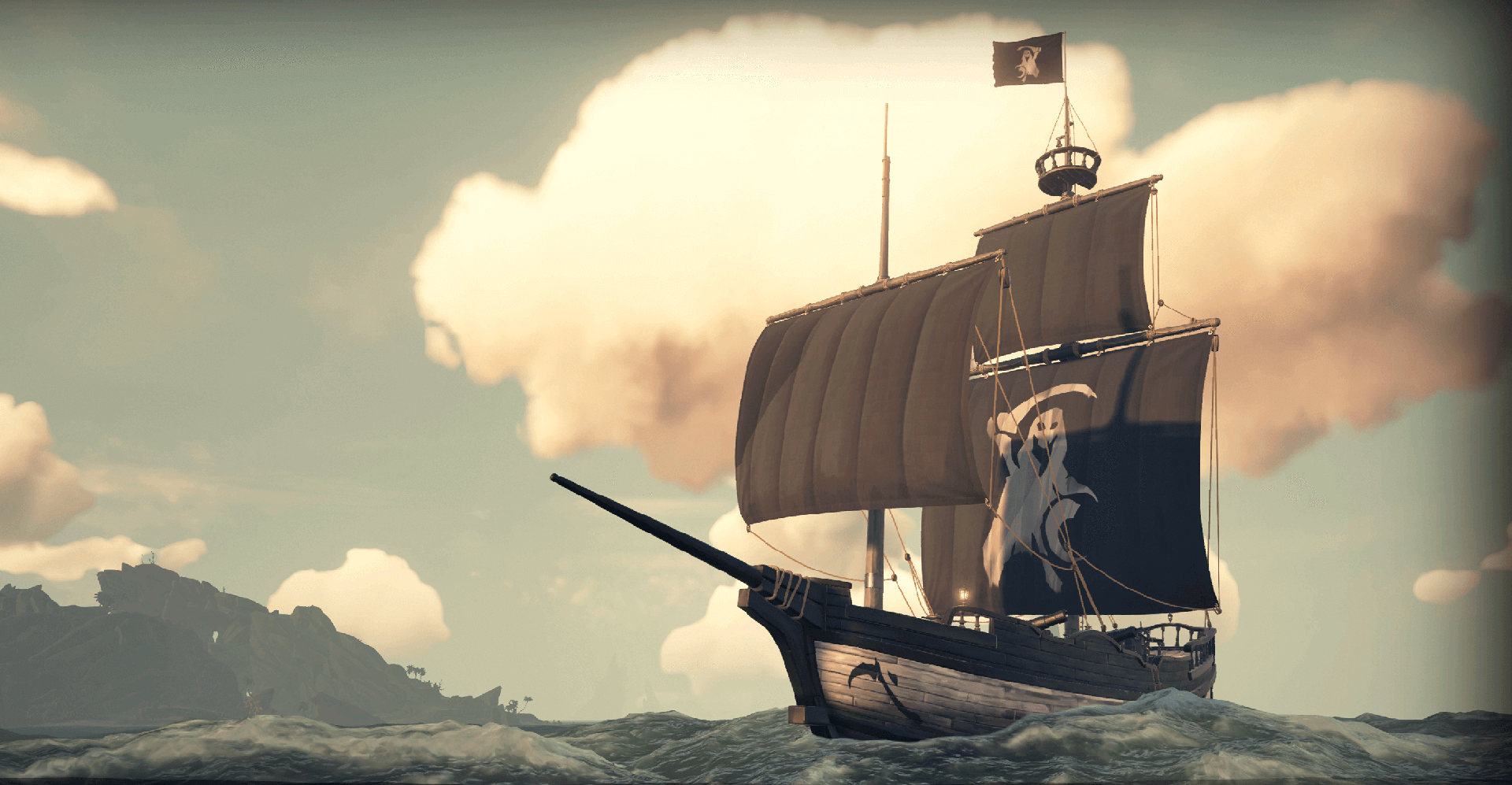 Wanderer’s Refuge be the center of attention in this brand new Mercenary Voyage!

If you swing by Duke in any tavern you will see that he has updated his inventory of Mercenary Voyages. He is now offering the Reaper’s Run of Wanderer’s Refuge voyage to all pirates up for the challenge!

Similar to the previous Mercenary Voyage, you will need to purchase this new lucrative voyage with doubloons. Happily, you also stand to gain doubloons by completing the commendations. 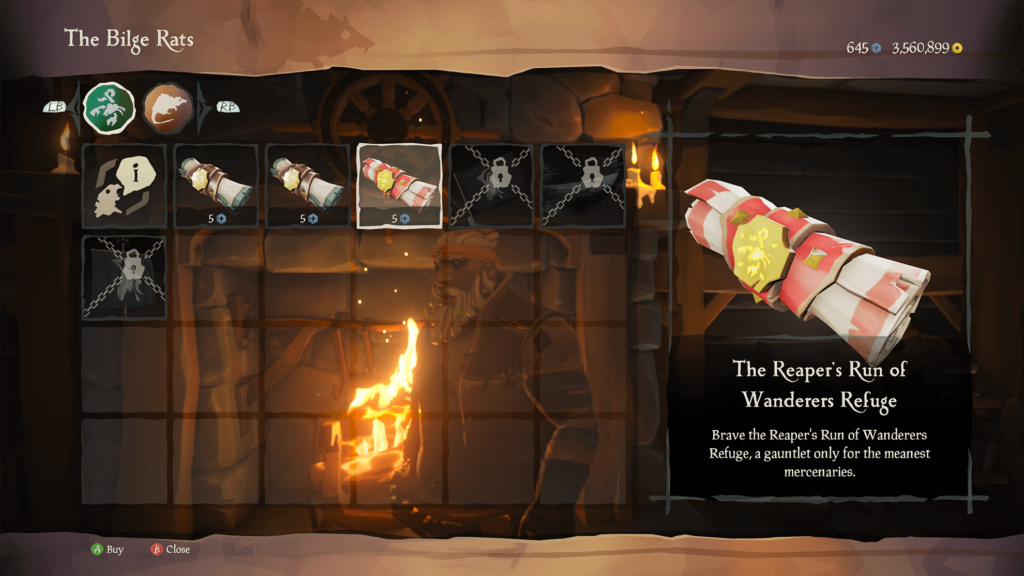 If you complete the five such voyages—with the reaper’s mark flag hoisted—you’ll need to pay 25 doubloons total. However, upon completing all five, you’ll earn a handsome 50 doubloons.

The Reaper’s Run of Wanderer’s Refuge is a unique Mercenary Voyage—in part because you will be completing five chapters of quests to complete it.

The five chapters include:

Complete this Mercenary Voyage, and you will unlock the:

To unlock the Legendary Reaper of Wanderer’s Refuge commendation, you will have to complete this Mercenary Voyage 5 times while flying the Reaper’s Mark flag.

This Legendary Reaper of Wanderer’s Refuge commendation will grant you access to purchase the Wandering Reaper Sail, Hull, and Flag!

Tell me more about this Reapers Mark Flag…

Apologies:
In our excitement, we might have gotten a bit ahead of ourselves

What does this Reapers Mark flag even look like? 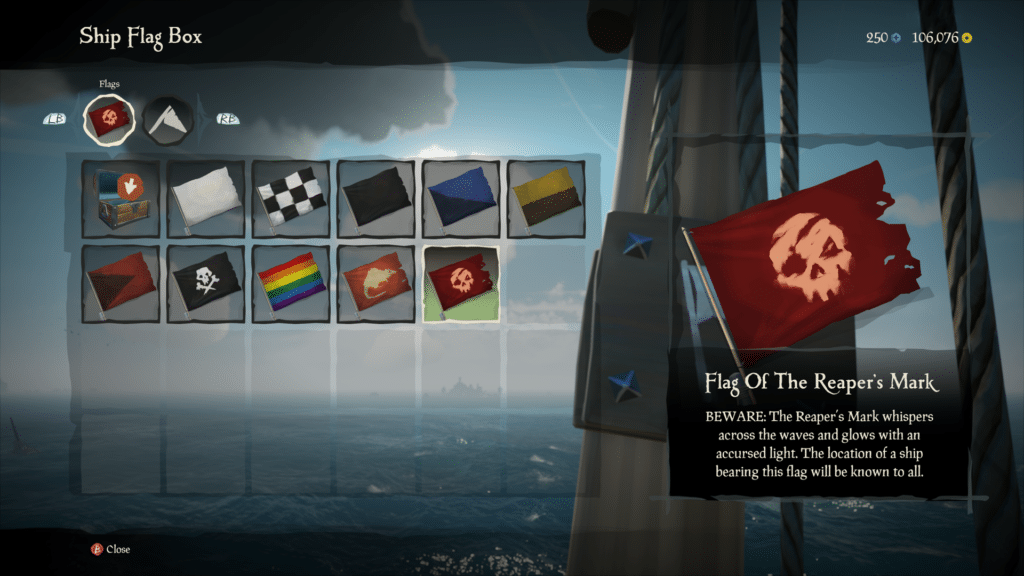 What’s so special about this Reaper’s Flag?

When your reaper’s mark flag is raised, your ship will be visible to every other ship via their ship’s map table. Your ship might show up something like this: 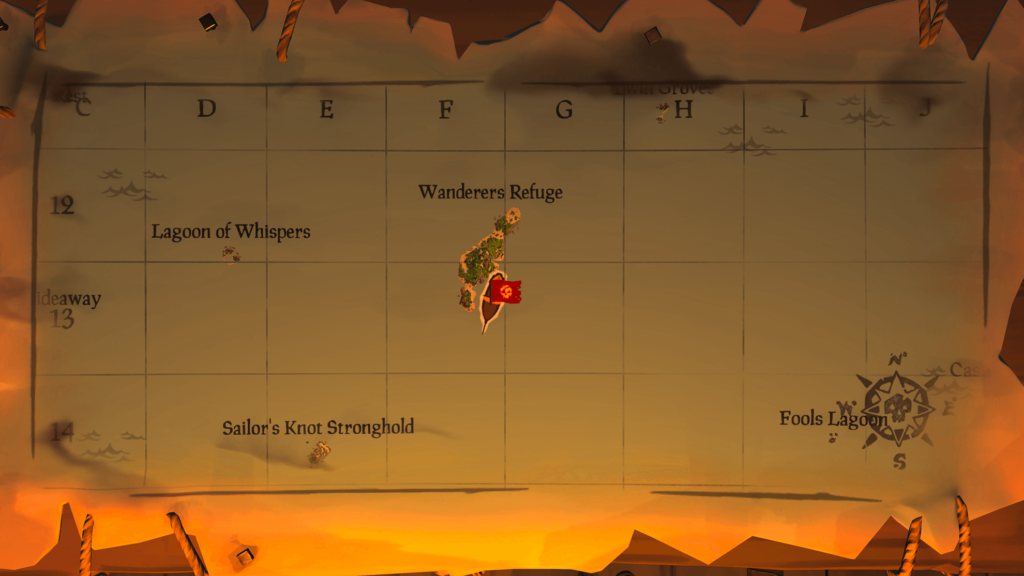 How do I use this Reaper’s Flag?

To raise this flag: climb to the top of your crow’s nest, open your “ship flag box,” and select that flag.

The Reaper’s Run of Wanderer’s Refuge: Chapter by Chapter

The first Chapter in this voyage will be a x-marks-the-spot quest on Wanderer’s Refuge. You will be given a map of Wanderer’s Refuge with three red X’s on it. Once you make your way to the island, you will go to each X on the island and use your shovel to dig up the treasure. 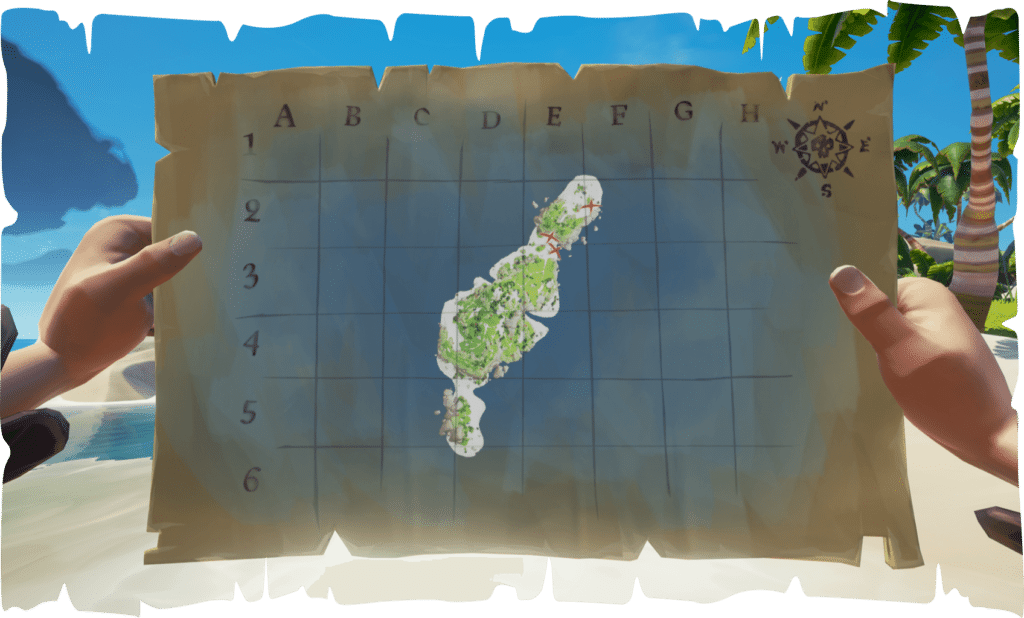 Once you have dug up all three chests you will have completed the first chapter. You are not done with Wanderer’s Refuge, yet! You will just be taking a quick detour to solve a Riddle quest elsewhere in the next chapter.

You will also be receiving Riddle quests on this voyage. These quests will have you running around an island looking for prominent landmarks or rock paintings. 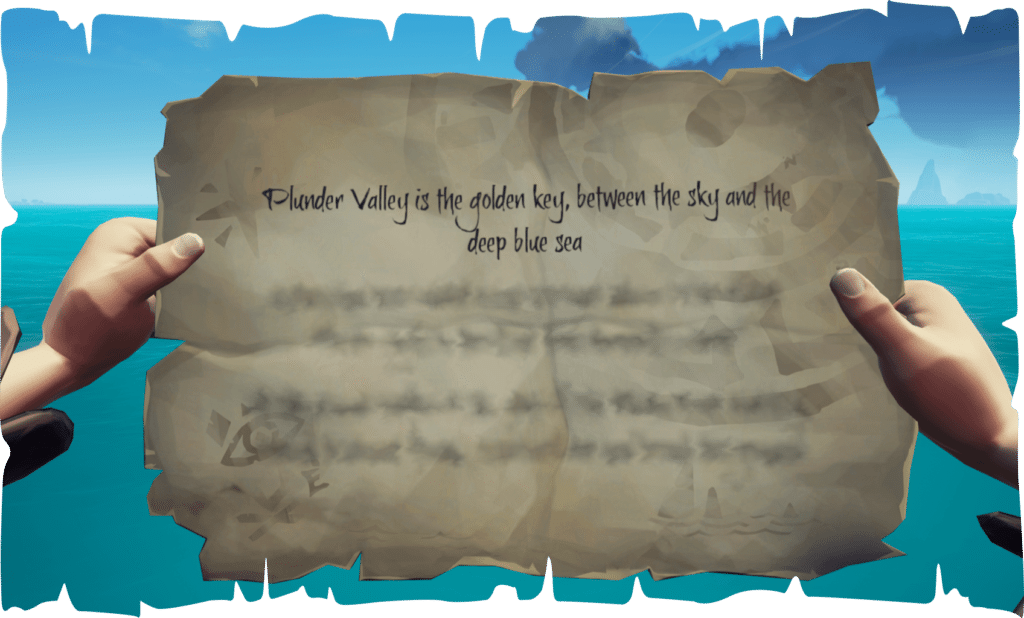 If you get stuck on a riddle, this might be a good time to open up your interactive map. You can toggle on all riddle clue markers (landmarks and rock paintings), or you can search specifically for the riddle you are stuck on.

For example: where is that blasted “Stone Gate” on Plunder Valley? Click on the

icon, and type “stone gate” into the search. You will then see exactly where the gate is on the map! Plus, you’ll see an image of the stone gate to help you know what exactly your sought after clue looks like.

Time to head back to Wanderer’s Refuge. You will now have 6 chests to dig up. Expect a nice haul of Captain’s Chests with a few cursed chests here and there. 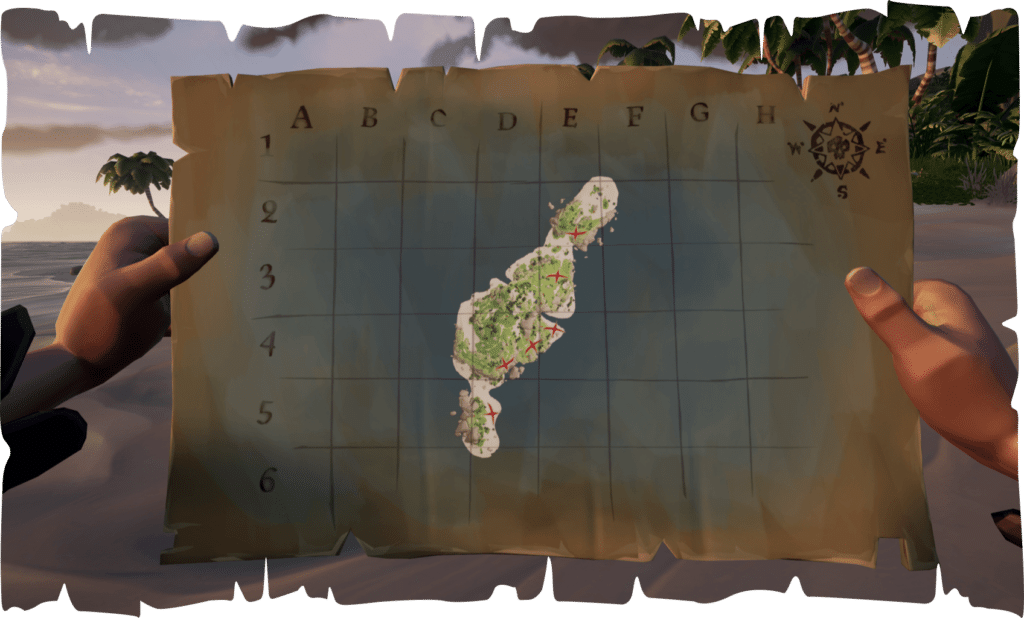 Time to forget red Xs and focus on clues once more in your second Riddle quest. Head on over to the island listed on your Riddle map, and start hunting! Again, if you get stuck on a riddle clue, you can always head back over to your trusty interactive map. 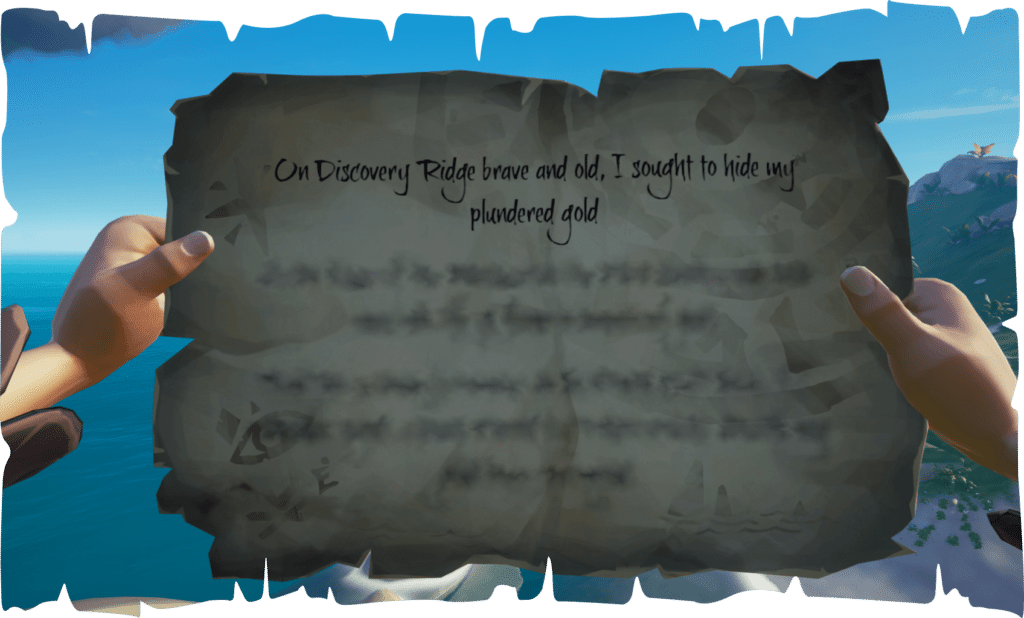 The fifth and final chapter of this voyage is one final X-Marks-the-Spot map on Wanderer’s Refuge. This island will start to feel like home at this point in your voyage. On your final return you will be digging up a grand total of 9 chests! 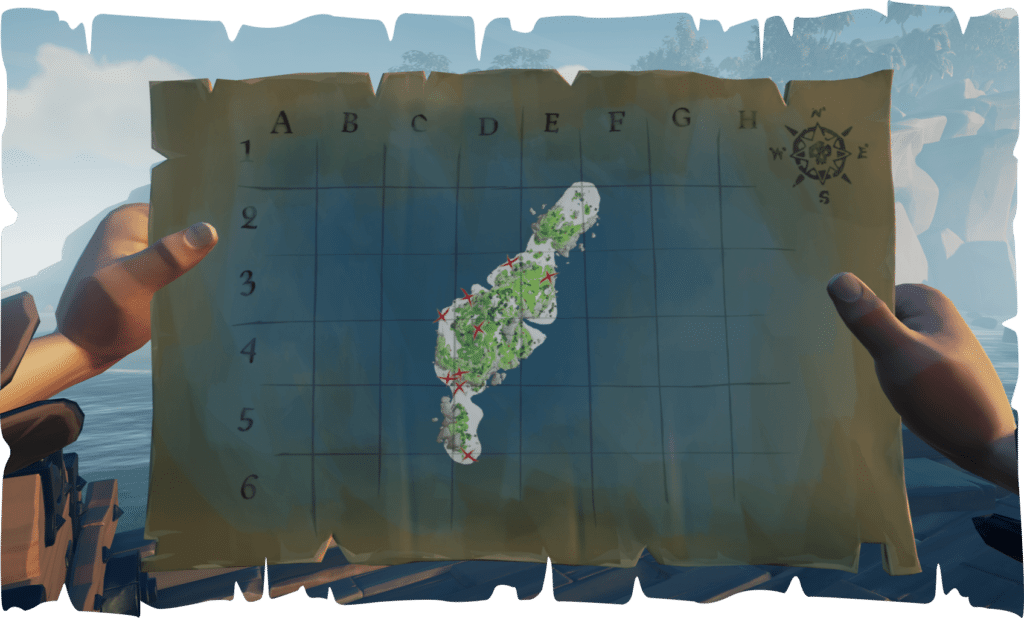 Congratulations on completing the Reaper’s Run of the Wanderer’s Refuge! Hopefully on your first run you had your Reaper’s Mark active to help you progress towards the Legendary commendation. After four more runs, you will be able to sit back, have a grog, enjoy your new ship cosmetics, and your hard earned doubloons!

Before you begin, here are a few tips that might help you live to tell the tale. There’s nothing revolutionary about these tips, but they are worth mentioning lest you—or in some instances a crewmate—be tempted to forego these precautions in your eagerness to set sail.

Tell-the-Tale Tip #1: Form Alliances Before you Raise your Reaper’s Mark

Since you have to have your Reaper’s Mark flag up during the whole voyage to get credit for the legendary commendation, you don’t want to take it down to form an alliance.

Once you are in an alliance, you can raise your Reaper’s Mark and vote on the voyage.

If you are going for the legendary commendation, you will be visible on every ship’s map table.

You might get lucky and every ship you run into might be friendly. There is also a chance that you will run into some pirates looking to steal your treasure!

In light of this, you might consider always having someone in your crew designated to keeping an eye on that horizon. This lookout can be on the island for a good vantage point or in the crow’s nest of your ship.

You might find it difficult to park your boat at Wanderer’s Refuge. After all, it might be a bit crowded with other pirates trying to complete their Mercenary Voyages.

You could drop crewmates off on the island for them to dig up the treasure.

If you’re only in it for the commendations and coveted new ship cosmetics, and you don’t mind foregoing the lucrative captain’s and cursed chests—you could simply have your crew dig on each X just once.

Don’t waste your time digging the chests all the way up, or taking them back to the boat. Simply one dig on the X will mark the x-marks-the-spot as complete. If you do this for every X you will trigger the next chapter and can continue your voyage.

Alternatively, you could circle back with your ship once all the treasure has been dug up, and haul it all on at once—or try to escape with the treasure in a rowboat.

And there you have it! You should be all set to add the Wandering Reaper cosmetics to your collection. If you come across anything you have question about, feel free to ask in the comments below. Fair winds, me hearties!

What happens if your ship is sunk during this run with the reaper flag is up. Will you have to start this all over again??

No, your ship can sink any number of times. The progress you make on your voyage will still be there until you leave your session. If you are going for the legendary commendation, just don’t ever touch your ship flag box after you raised your Reaper’s Mark.

Do you have to do it all in one sitting? So once I’ve completed the 5 chapters, do I have to do the other 4 voyages or can I come back to it the next day?

You just need to do the voyage in one setting. Once you see the Voyage Complete appear after doing the 5 chapters for the voyage, you can leave your session and do the next voyage later.

Um, what if you didn’t know about putting the flag up? Is there still a way to get the ship upgrades???

No, you must unlock the Legendary commendation which requires you to have your flag up. You still have time!

[…] Mark Time! If you successfully completed the Reaper’s Run of Wanderer’s Refuge earlier this month, you know the drill. If this is your first Reaper’s Run—or if you are […]

Can you still get the ship cosmetics?

No unfortunately. They were time-limited. They could show up at a later date in some kind of remixed form though!