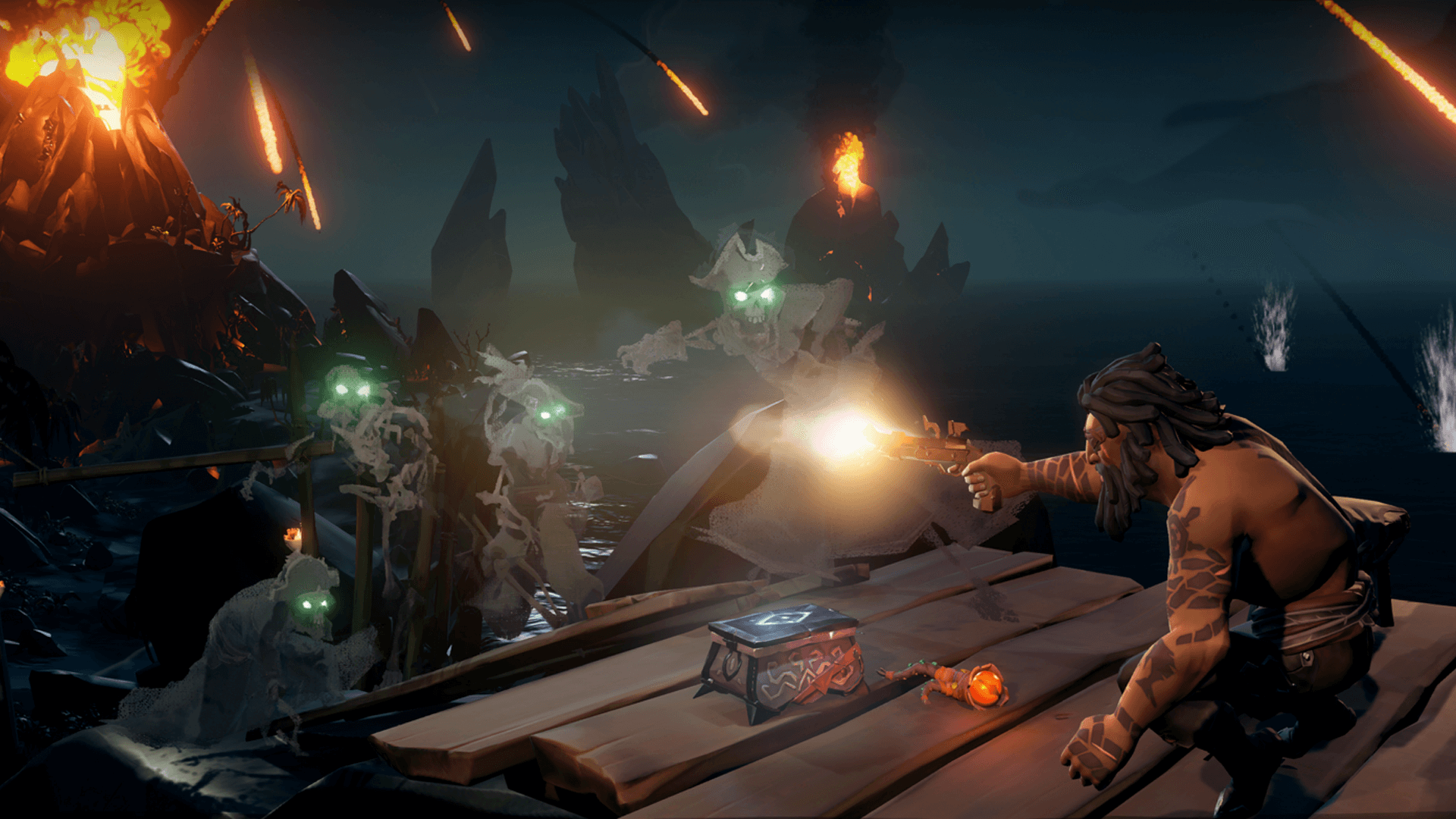 The Order of Souls needs your help! Dastardly skeletons have stolen precious artifacts, burying them throughout the Sea of Thieves. The order would like these artifacts returned and is willing to pay handsomely.

Why? Some of these artifacts you may have seen before, but some are entirely new curiosities to behold! These intriguing new pieces are known among the Order as “dark relics”—and each dark relic holds dangerous powers that could be unleashed in unsanctioned rituals.

What sort of unsanctioned rituals? We cannot be sure quite yet, but we’ve gotten a glimpse in the past.

The Order of Souls have learned the locations of these stolen artifacts and the skeleton gangs hoarding them through their visions. They have transcribed the information and passed the scrolls onto Duke.

The Order is now depending on us pirates to follow through on these tip-offs and return the dangerous relics before their twisted powers spread through the seas.

Ah, but they are not trusting in the generosity of pirates. No, the Order is offering large sums of gold and the opportunity for more doubloons than any event we’ve seen on the seas. Duke is hoping to sweeten this tempting lure with a few cosmetics.

Then again, we’d probably go on this adventure just to see the rumored dark relics with our own eyes! Let’s set sail!

Head on over to Duke. You’ll find him in any tavern on any outpost in the Sea of Thieves. The tip-offs will take the form of four brand new voyages that Duke is selling: one for each of the four regions.

The Dark Relic voyages are comprised of four chapters. Two of the four chapters are Order of Souls quests: you will be going to an island to hunt and kill multiple skeleton captains.

The other two chapters will be an x-marks-the-spot quests, but—instead of digging up chests or gunpowder barrels—you will be digging up treasures the skellies stole! Some will be dark relics. You might even find a “Ritual Skull.” We’ll give you a bit more details on those below!

Completing the new Dark Relic  voyage in each of the three original regions will unlock the “Seeking Stolen Power” commendation and title. This will allow you to purchase the brand new cosmetics Duke is offering.

If you’ve been steadily acquiring your mercenary finery, these beauties will complete your Mercenary ship: Mercenary Wheel, Mercenary Capstan and Mercenary Cannons.

You will also be granted 50 doubloons for unlocking the “Seeking Stolen Power” commendation!

On to the voyage!

The first quest in your Dark Relics voyage will be an Order of Souls quest. Expect to take down two skeleton captains for this quest.

Each skeleton captain will drop a Villainous Skull for you to pick up and eventually turn in to any Order of Souls in the Sea of Thieves.

The next chapter in this voyage will be an x-marks-the-spot quest. This will be your first opportunity to uncover a Dark Relic—maybe even a Ritual Skull!

Under one of the island’s X’s you will find one of the five Dark Relics.

Under the island’s other X’s you will find either stolen trinkets—very likely from the Devil’s Roar—or a Crate of Ancient Bone Dust.

If you are lucky though, beneath those X’s you might find a Ritual Skull. More on each of these findings—including where to turn each in—below.

Hopefully, until now two skeleton captains was not too much trouble to get through. Chapter three in the Dark Relics voyage will have you hunting down four skeleton captains on a different island in the region.

While Chapter 1 had you fighting regular skeletons, Chapter 3 will pit you against one of the of three different skeleton types. Be prepared to face off against either Gold Skeletons, Shadow Skeletons or Grass Skeletons.

Defeat these Skeleton Captains and walk away with four more Villainous Skulls.

The fourth and final chapter of the Dark Relic voyage will always be an x-marks-the-spot quest on a fort located in the voyage’s region.

So, if you see a ship at an inactive fort, their hull just might be filled with Villainous Skulls, valuable Bone Dust, expensive trinkets, Dark Relics, and perhaps even a Ritual Skull. It’s enough to tempt even the nicest of pirates…

As with the previous x-marks-the-spot quest, you are guaranteed to dig up at least one Dark Relic. The other X’s could be Bone Dust, Devil’s Roar trinkets, or—if you’re lucky—the Ritual Skull.

After digging up the three X’s on the island you will have completed the voyage! The first time you complete a region’s voyage, you will earn 5 doubloons as well as the following commendations.

Completing the Dark Relic Voyage to the Ancient Isles will unlock the commendation: “Ancient Darkness.”

Completing the Dark Relic Voyage to the Wilds will unlock the commendation: “Dark Wilderness.”

Completing the Dark Relic Voyage to the Shores of Plenty will unlock the commendation: “Darkening Shores.”

Completing the Dark Relic Voyage to the Devil’s Roar will unlock the commendation: “The Devil’s Darkness.” For this daring feat, you will earn 10 doubloons.

Dark Relic Findings and Where to Sell Them

What are the Dark Relics?

There are five Dark Relics you might uncover on your voyages:

Where do you sell the Dark Relics?

Dark Relics are sold to the Order of Souls.

The first time you turn in one of the five relics, you will earn 5 doubloons. Aye, but it gets better. Once you have sold at least one of each Dark Relic type to the Order of Souls, you will unlock the commendation: “A Dark Collection.”

This commendation will earn you 50 doubloons!

Under the island’s other X’s you will find other stolen trinkets. These are generally among the more valuable trinkets; they are very likely from the Devil’s Roar. All trinkets should be sold to the Gold Hoarders.

Alternatively, under the island’s other X’s, you might find a Crate of Ancient Bone Dust. This crate will fetch a pretty penny with the Merchant Alliance.

Does Bone Dust figure prominently in such rituals, or were the skeleton scalawags just stealing from everyone?

What is a Ritual Skull?

Ah, yes! If luck is on your side, beneath those X’s you might find a Ritual Skull.

While the Order of Souls knows where these skeleton gangs were hiding, they don’t exactly know what they were planning. The Order wants these Ritual Skulls because—like other skulls we’ve seen them use—the Order can cull memories from the Ritual Skulls and help the Order decipher what those skeletons were up to.

Commendations & Doubloons for the Ritual Skulls

When you turn in your 5th Ritual Skull to the Order of Souls, you will unlock the commendation: “Disrupting the Darkness.” You will also earn 5 doubloons.

Upon returning your 10th Ritual Skull to the Order of Souls, you will unlock the commendation: “The Ritual is Broken.” This will earn you 10 doubloons!

Although you might want to prioritize turning those Ritual Skulls into the Order first, after you’ve sold your 5th Ritual Skull to the Mysterious Stranger, you will unlock the commendation: “Dark Magics Dispelled.” This will get you an additional 5 doubloons.

This means a grand total of 20 doubloons for turning in those red-stained remains.

What might tempt you into boiling waters and skies ablaze? While the original three regions’ x-marks-the-spot quests guarantee one Dark Relic each…

Both x-marks-the-spot quests in the Devil’s Roar have 4 X’s rather than 3. This means more lucrative loot overall.

Plus, on your Order of Souls bounty hunting quests—Chapter 1 and 3—you will be picking up the more highly valued Ashen Villainous Skulls.

This is purely anecdotal, but for what it’s worth the morning Dark Relics launched, on our first x-marks-the-spot on our Athena’s Dark Relic Voyage we dug up two Dark Relics, one Ritual Skull, and a Crate of Ancient Bone Dust—not a bad haul!

Every so often in the Sea of Thieves, you might sail by some bobbing barrels. These have always been a welcome sight for those who like to keep a well-stocked ship, but in recent updates these barrels have given us even more reason to unceremoniously hurtle ourselves overboard.

Fish in a Barrel

If you haven’t checked these barrels in awhile, you might have missed the update when suddenly we could find meat, including fish! For anyone hoping to boost their reputation with the Hunter’s Call, these are an exciting find!

These aren’t just Splashtails, either. In some barrels, we’ve found some of the rarest and most valuable fish in the sea!

You might now notice glints and glows peeking up from the waves. With this Dark Relics update, treasures often float amidst the barrels: skulls, chests, crates, gems, and bottles have all been spotted.

Steer Clear of those Barrels!

I thought you just said we’d want to go to the barrels? Aye, swim your pirate to the barrels of plenty, but don’t go sailing your ship over top of those barrels, unless you’re sure what items are glinting in the water.

So—whether you eagerly await these barrels, hoping to find little treasures, or you’re bound and determined to not stop for anything en route to your destination—be sure to keep a weather eye on the waters ahead!

Ah, yes! With the Dark Relics update came an entirely new cursed chest! Originally, we had a bit of information on it in this article.

However, seeing as this chest is quite separate from the Dark Relic voyages, with implications and life extending far beyond this update, we thought it deserved its very own article.

Plus, we wanted to delve a bit more into this mysteriously cursed chest.

The Reaper’s Chest: Follow the Lights, if you Dare…

With these dangerously powerful Dark Relics buried deep in the sands, every ship you pass could be laden heavy with treasure. You might just take up your good friend Duke’s advice, “Do something daring!”

what are these tables with black pedestals on them, they have just popped into existance in this recent update i think. you cant interact with them or anyhing. anyone know what they are for

What island and where?

GROG, They are for the eighth tall tale. You can find them on multiple islands all around the Sea of Thieves and they don’t do anything unless you use them in a certain step of the tall tale.

They are for tall tales to summon Graymorrow and Briggsy

Last month, Sea of Thieves introduced the first in a new cycle of monthly updates with Black Powder Stashes, which has now been replaced with the Dark Relics update. If all goes according to plan, there will be a new update every second Wednesday of the month, bringing along a new Voyage type or quest and a bunch of limited-time and permanent content like treasures, useful items, and quality-of-life improvements. Speaking of useful items, did I mention harpoon guns on rowboats?