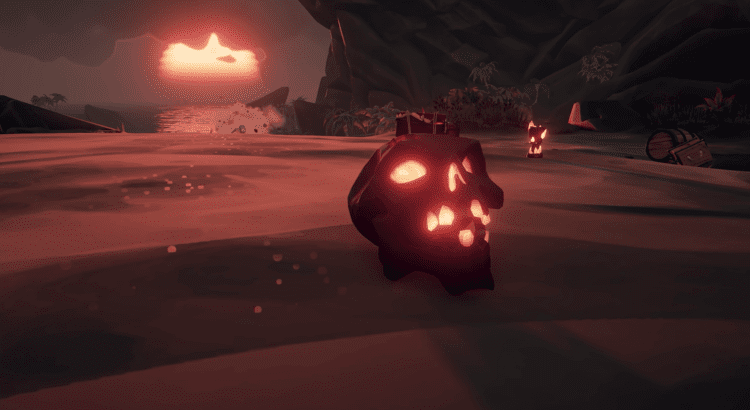 Update: The Ashen Winds update has been released! Head on over to our Ashen Lords World Event guide to learn the ways of the new fiery foe!

The next Sea of Thieves update is approaching and we have just learned that it comes with a brand new encounter. While the latest First Look segment doesn’t go into detail about this new encounter, Andrew Preston gives us our first glimpse at the Ashen Winds Skull!

The Ashen Winds Skull is a new and very unique skull in the Sea of Thieves. Players can collect and sell it to the Order of Souls for gold if they choose.

Player can also choose to hold onto it and use it as a weapon! This new tool can be used against any player or any PVE threat in the Sea of Thieves world.

The unique and interesting feature of the Ashen Winds Skull is that it acts as a flamethrower when activated! It will spit a jet of hot fire from its mouth lighting any friend or foe nearby ablaze!

This means that Firebombs are not the only thing that can be used to light a ship on fire. Manage to make it aboard an enemy crew’s ship with an Ashen Winds Skull and you can light their entire vessel on fire.

The Ashen Winds Skull does not have infinite ammo though. It does have a charge that depletes as it is used. Using the charge will also make the skull worth less when selling it.

Players can choose to sell the skull without using it for maximum value or wait until they are done causing chaos with it and sell it for much less.

We cannot wait to hear all the stories that this new tool will create! Gaining another tool that allows players to cause damage while on ships will surely create new strategies and tactics for all pirates to master!

We are also excited to learn more about the new encounter that accompanies this new skull. We will be sure to cover everything there is to know about the encounter once the update releases!