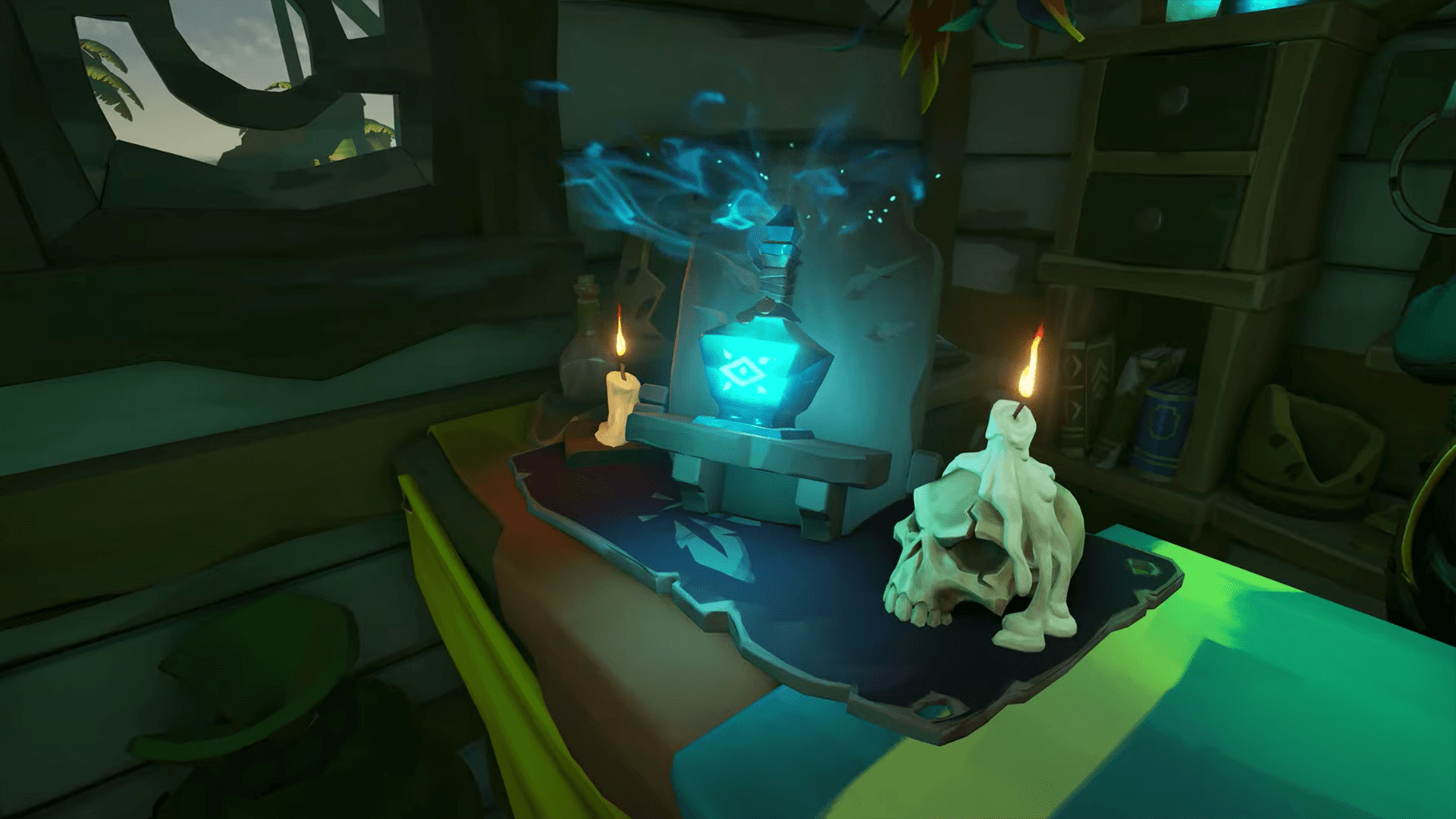 The month of February brings lots of interesting and unique items to the Pirate Emporium! There are of course the items we have grown to expect such as emotes for your pirate and cute outfits for your pet. What might come as a surprise are newly added cursed pets and the Pirate Appearance Potion!

Yes, the first ever potion has made its way to the Sea of Thieves and is available now in the Pirate Emporium!

So let’s dig into all the goodies we have this month starting with Pets!

This month the Pirate Emporium has stocked two new pet outfits as well as introduced as two new cursed pets!

These are not outfits for your existing pets but standalone pets similar to the Skeleton Cockatoo and the Skeleton Marmoset released last October.

These pets have been brought back to life with dark magic! Each brands a cute little heart on their chest while the rest of their look is rather terrifying!

You can purchase them each separately for 499 Ancient Coins each.

The Admiral Pet Outfit Collection brings an Admiral Outfit for each one of the current pets in the Sea of Thieves. These outfits are sure to make your companion look the part of an accomplished captain. Just be sure the fancy new look doesn’t go to their head and they start bossing you around!

Each outfit is available for 249 Ancient Coins.

The Rose Pet Outfit Collection also brings a Rose Outfit for each one of the monkeys and parrots available. The outfits add some much needed cuteness to those ragamuffins you call pets.

As with the Admiral Pet Outfit, these Rose Pet Outfit costs 249 Ancient Coin for each pet.

If you have been wanting a way to change the look of your pirate without losing all of your progress, this potion is your answer.

The Pirate Appearance potion will allow you to change your pirate’s appearance while retaining your currency, progress and purchases!

You will be prompted to use the Pirate Appearance Potion each time you login to the game until you use it. If you want to set sail immediately and don’t have the time to pick a new pirate, don’t accept the prompt to use the potion and you will be asked next time you login.

Once you decide to use your potion, you will be taken back to the initial pirate generator that you originally chose your pirate from. You will literally have an infinite amount of pirates to choose from. Finding that perfect pirate is an adventure all on its own!

If you could paint the month of February it would be colored red! Which is the color you will find infused in these twisted but romantic weapon cosmetics.

If you primary a particular weapon and are not interested in the bundle, each Reaper’s Heart weapon cosmetic is available to purchase separately for 249 Ancient Coins.

If you have a special someone you sail the sea with you or you just want to show someone you care about them then this bundle is for you!

Hopefully you can find your Rose or Jack to share the flying emotes with!

The Order of Souls Emote Bundle includes the Mystical Divination, Good Fortune, Dire Omens and Talking Dead emotes for 499 Ancient Coin. Or you can purchase each one separately for 149 Ancient Coin.

Have you been feeling cocky in the Arena but haven’t found just the right emote to show off with yet? The Sea Dog Emote Bundle is bound to have an emote that will let you strut your stuff in style!

Yes, you read that right. The Collector’s Paradise Garden Figurehead emits a colorful rainbow as a halo around the figurehead!

The Paradise Garden Ship Collection pays homage beautifully to one of Rare’s Xbox 360 era titles, Viva Piñata! In Viva Piñata, you play the role of a gardener building a space welcoming to all kinds of plant and animal life. You will see creatures found in Viva Piñata cleverly included in some of the ship cosmetics included in this bundle from the goose on the cannons to the worm on the hull.

Separately you can purchase the Collector’s version of the Figurehead and Sails.

Rare has partnered up with St. Jude Children’s Research Hospital this month for another charity Pirate Emporium event! All proceeds from the purchase of the Valiant Dawn Sails will go to this wonderful charity.

If you have some coin about you and looking to put it to a good cause, these stylish sails are just the answer!

It is a fine month for the Pirate Emporium! We are super excited to see one of the larger fan requested features being addressed with the Pirate Appearance Potion! If you plan on using this potion, let us know what pirate you will be turning into when using it in the comments below!

Have lots of gold and doubloons to spend? Duke has some brand new items in the Black Market that might catch your eye. We have catalogued his February inventory in our What is Duke Selling article for easy window shopping!