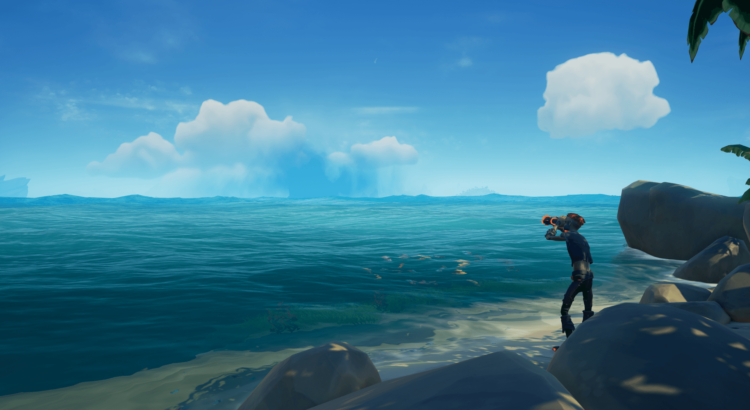 Stitcher Jim has been on his apology tour since the beginning of the Smuggler’s Fortune update to Sea of Thieves.

Jim’s first stop was the Uncharted Island at I-12. Keeping a low profile on those less-often-visited shores, he oversaw Duke’s Rag and Bone Crate dispersal operation.

Where is Stitcher Jim now?

With the Rag and Bone Crate situation under control, Stitcher Jim has now moved on. Stitcher Jim is now at an island whose name befits his still tenuous position in the Sea of Thieves: Castaway Isle.

Castaway Isle is located at K-14 on the map. There you will find Stitcher Jim peering through his spyglass—his gaze fixed upon the Fort of the Damned.

You will want to head over to Castaway Isle and speak to Stitcher Jim to earn the Making Amends commendation and unlock 5 doubloons! Stitcher Jim can be found on the East side of the island.

You can also find Stitcher Jim’s savior—the Masked Stranger—on Castaway Isle. The Masked Stranger can be found in the middle of the island near the shark statue. It should come to no surprise but she still has nothing to say…

Luckily, Stitcher Jim does have quite a tale to tell! Talking to Stitcher Jim, you will learn a bit more about the Fort of the Damned and why it has caught his attention.

According to Jim, Old Boot Fort has been twisted and turned into unhallowed ground for some dark ritual. The skeletons there are creating a portal to the Sea of the Damned using the stolen Dark Relics!

This portal is similar to the Ferryman’s portal but a more sinister version. The Shadows of Fate, the new type of Shadow Skeletons, have been slipping through it into the Sea of Thieves.

While this all sounds rather dreadful, it doesn’t have to be! Stitcher Jim informs us we can stop the ritual and prevent this nasty takeover.

Stitcher Jim explains that there are six statues at the Fort of the Damned and each one accepts a different Flame of Fate. Pirates wanting to stop the ritual must light all six statues and place a Ritual Skull on the plinth found in the fort.

By using the Flames of Fate and the Ritual Skull, we can wake the fort—giving us a chance at stopping the skeletons and their evil ritual.

Why isn’t Stitcher Jim joining in the fight?

Pirates will need to visit the Ferry of the Damned to bring back Flames of Fate.

Well, apparently Stitcher Jim is on thin ice with the Ferryman. Stitcher Jim explains that he cannot go to the Ferry of the Damned because the Ferryman will not allow him to pass back through to the land of the living.

Why does Stitcher Jim know so much about this dark ritual?

He tells us he learned a few things from his time working with the Gold Hoarder. Although we know the Gold Hoarder was on a greedy mission to claim all the riches in the sea, it is unclear how this ties in with the aims of these ritual happy skeletons.

Well, regardless of their reasons, they must be stopped—and we’ve collected a bit more information that should help you on your way.

We’ve got an article all about the Flames of Fate and how to get them: Sea of Thieves Flames of Fate: Light your Lantern in Colorful Flames!.

We’ve got an article all about all the ways to secure yourself a Ritual Skull: Sea of Thieves—How to Get a Ritual Skull, Skull Seekers and Skull Stashes.