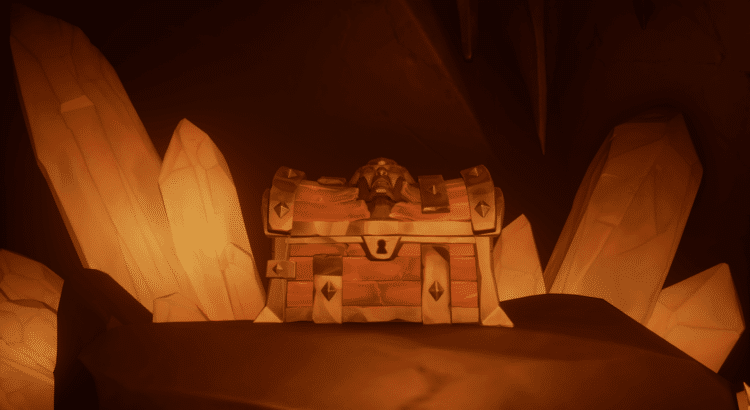 Since the game’s launch, Cursed Chests have been a playful inclusion in the Sea of Thieves sandbox—adding merriment, adrenaline, and cleverness.

We have had many a laugh watching our fellow pirates stumble off the dock while trying to turn in the Chest of a Thousand Grogs. Fighting Krakens, Megs, Skellies, or pirates is always a bit more intense with a Chest of Sorrows aboard. Yet, we love sneaking that blubbering box onto enemy ships…

While pirates are now well accustomed to both the Chest of a Thousand Grogs and the Chest of Sorrow, we must all be on our toes again. Aye, there’s a new Cursed Chest in the sandbox, and it is a doozy!

Introducing…
The Chest of Rage!

What is the Chest of Rage?

Official Lore has it that:

“The Chest of Rage contains the souls of trapped pirates, who desperately want to be released. And their rage fuels the power of this chest.”
See the Crews of Rage: Official Sea of Thieves Content Update video.

In more specific terms relating to gameplay, the Chest of Rage is a new Cursed Chest that heats up over time. If left unattended, the chest will explode in a fiery fit of rage!

Aye, its blazing fury will set afire anything near enough to feel its wrath!

Anything? Well, anything that can normally be set on fire. This means the Chest of Rage can scorch pirates, skeletons, and ships!

Can the Chest of Rage damage Rowboats?

Ah! This is an interesting question!

As of the writing of this article… the Chest of Rage does not appear to damage rowboats.

Rowboats seem imbued with some mysterious magic. Although rowboats can be severely damaged by volcanic rock and gunpowder barrels, rowboats are not damaged by firebombs.

How much time do you have before the Chest of Rage Explodes?

Just like with the Chest of Sorrows, you’ll get a bit of respite between the Chest of Rage’s outbursts. If the chest has just exploded, it will take the chest two minutes to go from completely calm to exploding again.

However, if the chest has just been simmering in boiling water below deck, it’s not exactly “completely calm.” So, you’ll have a bit less time, depending on how angry it is.

How to Enrage the Chest:

Why would I want to make the Chest angrier faster?

Perhaps you’re on an enemy ship and you’d like to increase the chances that the chest will explode before the chest is discovered and thrown overboard.

Take a few swings at the chest with your sword, or maybe put a few holes in it with your firearm. As you might imagine, this makes it angry. More anger means less time until it loses its temper.

How to Calm the Chest of Rage:

Ah, yes. This is perhaps more important to know. You have a couple options to calm your Chest of Rage and prevent it from exploding on you or your ship. Both involve water.

Douse the Chest of Rage with Water

Seeing as this Cursed Chest erupts in fire, it seems only natural that water proves a fitting defense.

If you’re on your ship, it’s likely easier to fill your bucket from the ship’s water barrel. When the chest starts to get a bit heated, throw that bucket of water right at its fiery face.

Like a drunken pirate spoilin’ fer a tavern fight, a cold splash of water to the face seems just the thing to bring ’em around.

Surround the Chest of Rage with Water

You can also keep a bucket or two of water in your hull to help the chest keep its cool.

As the Chest of Rage’s temper begins to simmer, so will the water! Aye, if you wade into it, you could start seeing red flickering around your vision and your health bar in decline.

Other Tactics for Handling your Chest of Rage

You might not always need to calm your Chest of Rage to prevent it from destroying your ship. Sometimes the best thing to do is to keep the Chest away from your boat.

Will putting the Chest of Rage in a Rowboat protect my ship?

Do you mean that you plan to put your Chests of Rage in a rowboat, and row those chests through the seas—independent of your ship? Then, yes. Of course, your ship will be safe.

Alas, that will not work. As soon as the Chest of Rage explodes, it severs the line between your rowboat and the ship.

Of course, you could have a crew member on the rowboat constantly cooling the chest, but then you might as well just cool the Chest of Rage with it aboard the ship.

Take it Off the Boat!

Everyone who has once forgotten to remove a Chest of Sorrows from their ship before exploring an island… and returned to find a sinking or sunken ship—raise your hands and hooks!

Don’t worry. We wouldn’t ask, if we hadn’t done it ourselves.

Where do I turn in the Chest of Rage?

Like the other Cursed Chests in the Sea of Thieves, the Chest of Rage can be sold to the Gold Hoarders. If you’re not already a pirate legend, this will enhance your reputation with the trading company. They’ll also reward you with a healthy heap of gold.

Unlike the other Cursed Chests, Chests of Rage can be sold to the Masked Stranger on Reaper’s Hideout. She will give you double the amount of gold for your trouble.

However, the Masked Stranger is not part of any trading company. So, turning the Chest into her will not enhance your reputation with the Gold Hoarders.

Just to be clear:

It all depends which you covet the most.

How much is a Chest of Rage worth?

Since this cursed chest is quite a handful, you can expect the payout for it to be pretty good!

Chest of Rage Values for the Gold Hoarders

From the dozen or so Chests of Rage we have turned in we have seen the gold received for each be between 3,000 and 3,400 gold. That kind of return for one chest will catch any pirates attention.

Chest of Rage Values for the Masked Stranger

As you may be aware by now, the Masked Stranger on The Reaper’s Hideout is paying double for certain items. She is accepting Chests of Rage and you can expect between 6,000 and 6,800 gold from her for each Chest of Rage you turn in.

How can I find a Chest of Rage?

It also stands to reason that—like almost all treasure in Sea of Thieves—these will likely turn up at random: washed up on the shores, floating in barrels of plenty, sunken deep within wrecked ships, among the loot amassed from Krakens, Megs, and Skellie Ships, etc.

However, there are two surefire ways to find a Chest of Rage.

If you’ve not yet braved a Skeleton Fort in the Devil’s Roar, you are in for an adventure! Yes, the volcanic activity can make things a bit tricky. You’ll need to keep an eye on your ship, if you’d like to keep it afloat.

You might also run into the new Ashen Skeletons. If you’ve completed the Seabound Soul Tall Tale, then you’ve experienced these Ashen Skeletons firsthand.

Adorned in ruby embers and singed garments, they do have a particular immunity: fire. Oh, you can light them on fire all you want. You’ll see the flames wreathe their bones, but it won’t deal them any damage. Don’t waste your firebombs.

Good News:
Not everything is more difficult in The Devil’s Roar.

Geysers are a one-shot kill on any skeleton. So, as soon as the island starts to rumble and quake, take heart. You can make quick work of an entire skeleton wave just by luring them over a group of geysers.

For the February 2020 Crews of Rage Update, Duke is selling Raging Bounty Voyages. The first quest in these voyages will be to dig up a Chest of Rage. Aye, complete just one x-marks-the-spot quest, and “Voilà!” You’ve got your very own Chest of Rage.

As with most of Duke’s voyages, we expect these will be swapped out with the next month’s update.

Who knows? Duke might still want us to collect these chests for a bit. After all, he brought back those Ashen Key voyages. Nevertheless, we’re willing to bet that Duke won’t offer these voyages forever.

Pro Tavern Tip: How to Stock Up on Chests of Rage

As you might have guessed—for the Raging Bounty Voyages, Duke is offering one voyage for each original region—Ancient Isles, Shores of Plenty, and The Wilds—as well as a legendary voyage.

Here’s what you might not have guessed: every voyage begins with an x-marks-the-spot map to dig up a Chest of Rage in the Devil’s Roar.

Only after you’ve dug up your Chest of Rage do you sail for the other regions—thus compelling you to make a rather treacherous trek with the fiery chest aboard.

Well, me hearties, you can get one of each voyage from Duke all at once. So, you can have the voyages for all three regions—plus the legendary voyage, if sailing with a legend—when you set sail for the Devil’s Roar.

Not to mention the fact that every crew member can do this, which means a potential total of 16 voyages.

If you don’t care about completing the voyages at the moment, and just want to stockpile some Chests of Rage…

Enjoy sailing with all those angry chests…

The Chest of Rage is another fantastic addition to the Sea of Thieves sandbox, and we can’t wait to see what mischief ensues…

If you’d like to share any of your Chest of Rage experiences in the comments below, we would love to hear any and all of your fiery adventures!