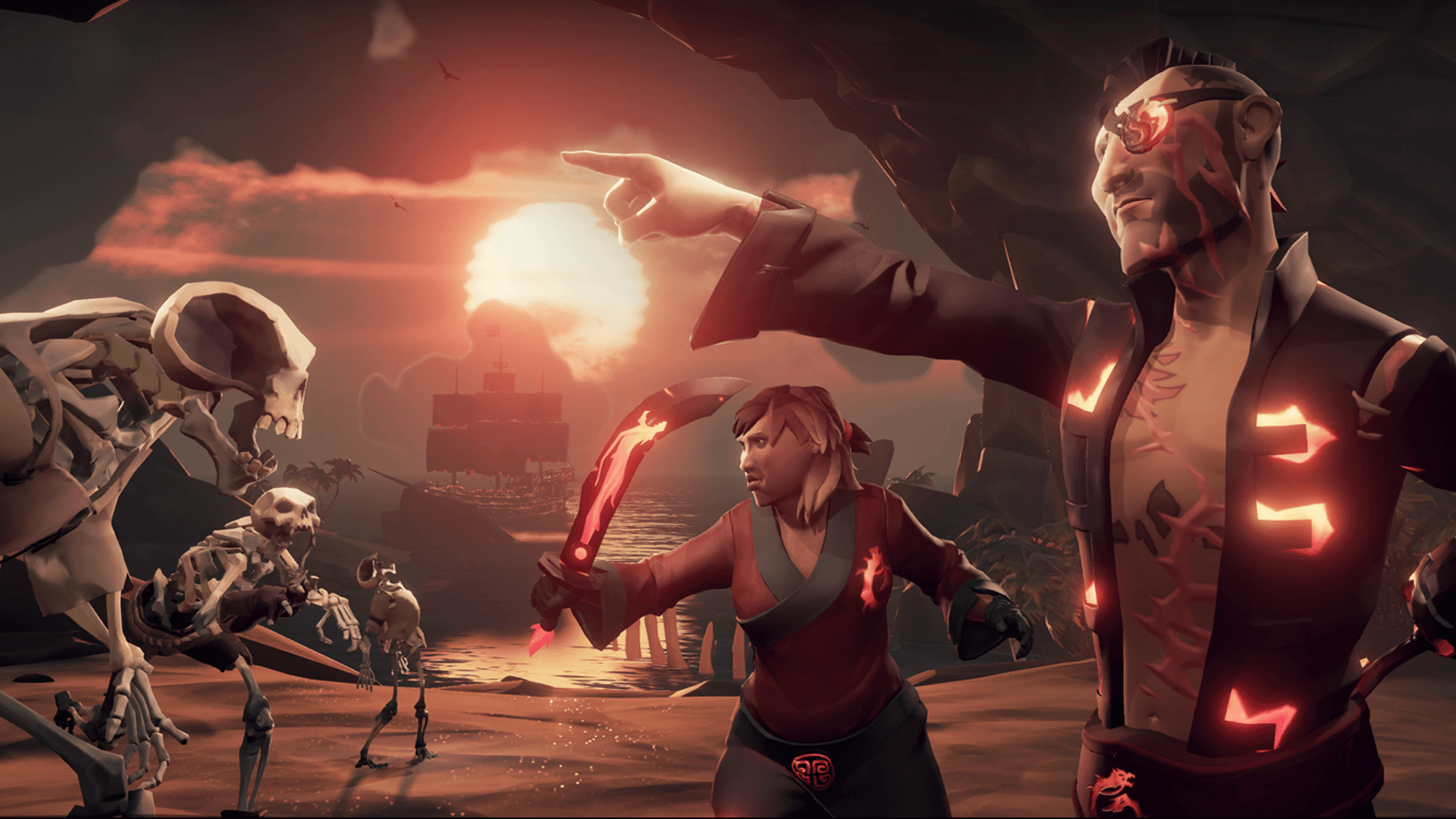 This month’s article about the latest cosmetics available at the Black Market should really be titled “What is Stitcher Jim Selling?”.

In The Seabound Soul update, our good friend Duke has fled the Outpost to speak with his boss, Larinna, about the latest situation brewing around the skeletons and their precious Ashen Treasures.

In the meantime, Stitcher Jim has taken over the Black Market in Duke’s absence.

As you should expect, Stitcher Jim is selling brand new cosmetics for doubloons and gold. What you might not have expected though is a brand new section found in the Black Market designated for something Stitcher Jim has acquired all on his own! Feast your eyes on the fiery Ashen Dragon cosmetics!

This brand new section in the Black Market is for the newly released Ashen Dragon cosmetics. While most of the cosmetics are available immediately upon playing after The Seabound Soul update releases, there are a few that are locked behind some commendations.

These commendations are new and tied to the Ashen Treasures section in your Reputation tab. You will need to collect all five Tomes of Curses to unlock every cosmetic piece.

We have a guide here on how to unlock each of the commendations that are required for these hot new cosmetics!

That is after you pay up some gold!

Hopefully you have been able to complete the Fort of the Damned a few times and escaped with those valuable Reaper’s Chests! Those doubloons are going to fetch you some of the wonderful cosmetics added this month!

Last month the Black Market was selling several Wild Rose clothing cosmetics. This month Stitcher Jim has even more Wild Rose cosmetics though this time, they are weapons!

You can continue your Wild Rose collection with the Wild Rose Cutlass, Wild Rose Blunderbuss, Wild Rose Eye of Reach and Wild Rose Flintlock all available for doubloons.

Everyone’s favorite cosmetic set is back with even more items to collect. These Wailing Barnacle cosmetics cover all your equipment needs.

If the Ashen Dragon cosmetics were not hot enough for you, Stitcher Jim is also offering the Forsaken Ashes Ship cosmetics.

If you were running low on doubloons, don’t worry! We can now start looking at some of the cosmetics that cost gold instead.

We all know that the Kraken and Crab ship cosmetics were a huge hit. We still see plenty of pirates showing off their sea creature cosmetics. Well if you were a fan of the Kraken cosmetics, you will sure fancy the Inky Kraken Ship cosmetic set.

Well this was quite a month! We had Desirables for Doubloons, Goodies for Gold and the brand new Ashen Dragon cosmetics!

Let us know in the comments below what your favorite cosmetic set to hit the Black Market this month is!

With this latest update, The Seabound Soul wasn’t the only new adventure to experience in the Sea of Thieves. Below you can find articles to many of the other stories, mechanics and cosmetics added to the game!

How to get an Ashen Tome of Curses? The Sea of Thieves Ashen Treasures Guide

Sea of Thieves—How to set the World on Fire!