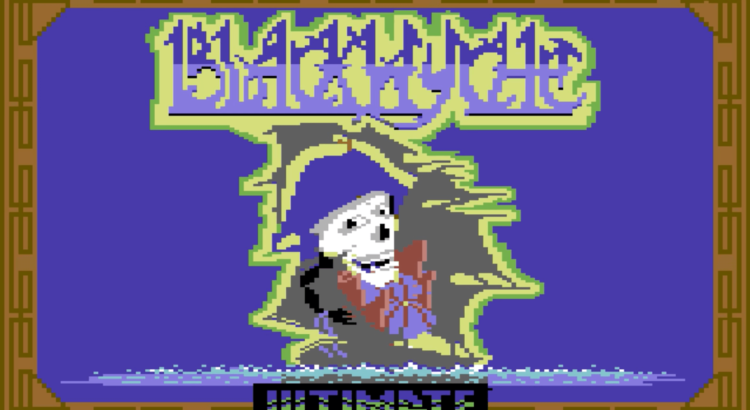 It’s always an exciting moment when two game’s universes cross into each other. Especially when both games happen to be Rare games!

In regards to Sea of Thieves, we have already had some legendary crossovers. Banjo-Kazooie has made its way into the game with some very stylish ship cosmetics. There is even a rock painting on Plunder Valley paying homage to the bear and bird.

Rare’s cherished fighting game, Killer Instinct, also has a presence in the Sea of Thieves with its own fearsome ship cosmetics.

The latest game to crossover into Sea of Thieves is Blackwyche!

Blackwyche is an action-adventure game developed by Ultimate Play the Game, who later turned into Rare Ltd., the beloved game studio we know today! The game was released in 1985 on the Commodore 64.

It is actually the third title in the Pendragon series. Each game featured the protagonist Sir Arthur Pendragon. This dashing adventurer is why were are exploring this old series of games as he is playing a central role in the latest bit of Sea of Thieves lore.

Sir Arthur Pendragon has now officially stepped foot in the Sea of Thieves! While there has always been a portrait of him in the Blackwyche shipwreck found on Shipwreck Bay, he can now enter the world in ghostly form. This is to lead us on a brand new Tall Tale adventure, The Seabound Soul!

Thanks to his time on the haunted Blackwyche from the original game, this will not be his first time freeing souls. You see, in Blackwyche, Arthur Pendragon’s main objective was to free the soul of the former captain of the Blackwyche, Captain Richard Cavendish.

Captain Cavendish had discovered an ancient artifact in the subterranean chambers of an uncharted island. The artifact was The Crystal Skull of Souls!

Unfortunately for the crew of the Blackwyche, the skull was possessed by an evil power and cursed the crew and their captain. Their souls were held captive and they were forced to sail a never ending voyage.

After many years of the Blackwyche roaming the sea, Sir Arthur Pendragon came across the ancient vessel and boarded it. He quickly learned of its demise and was bound to liberate the crew from their terrible fate.

Now that we have The Seabound Soul Tall Tale to take on, we are lucky to have a soul saving savant such as Pendragon to help us along the way!