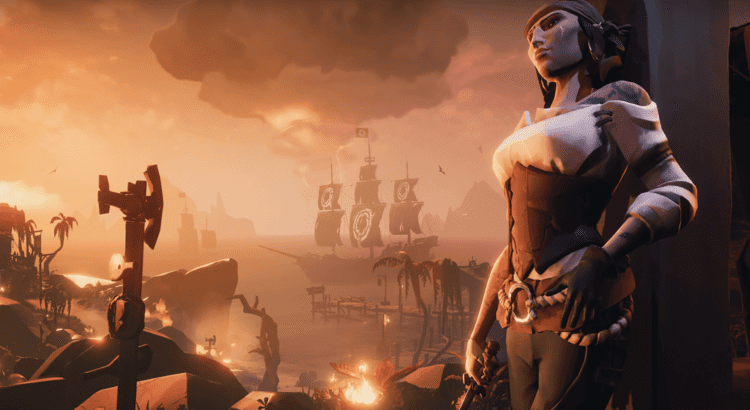 Don’t bother looking for Duke in the tavern as you won’t find him there anymore. Instead, you’ll find a new and unfamiliar face to the Sea of Thieves, Larinna! She will be standing just outside the tavern entrance ready to great any pirate passing through.

Larinna will be your new Bilge Rat representative for the time being. All of Duke’s previous responsibilities will now go to her. That includes the Black Market so the next time you are looking to purchase some new cosmetics you’ll know where to go.

Larinna is the founder of the Bilge Rats! She lives in the moment and isn’t very fond of the status quo. Larinna started the Bilge Rats for all misfit pirates in the Sea of Thieves looking for a group to call their own. This group of pirates follow their nose and look for adventure around every corner.

Larinna also believes freedom is the most important pirate principle. Getting rich or even becoming a Pirate Legend are the least of her interests. While being part of the establishment goes against being a Bilge Rat, if the Bilge Rats did have a leader, it would be her.

Larinna appreciated the friendly presence Duke brought to the Bilge Rats but felt that he was getting complacent. She got worried after Duke started making some mistakes and offering stale voyages. If something was going to change, she felt that her above all would be the best person to take the reins and spice things up!

You can now find Duke on Lagoon of Whispers! You’ll find him enjoying the breath of fresh air opposed to the stuffy tavern. He does miss the tavern life but decided it was best to move on after the mess with Stitcher Jim. He feels bad about his poor judgement and is worried that he’s sullied the Bilge Rat name.

Don’t worry though! Duke isn’t just sitting around feeling sorry for himself. He has been helping Umbra build up Lagoon of Whispers a bit. It is a tiny island with not much on it so any new structures will be a huge improvement. Duke wants to make it nicer for her since she is always looking after him.

Oh, and he is also getting his hurdy-gurdy on!