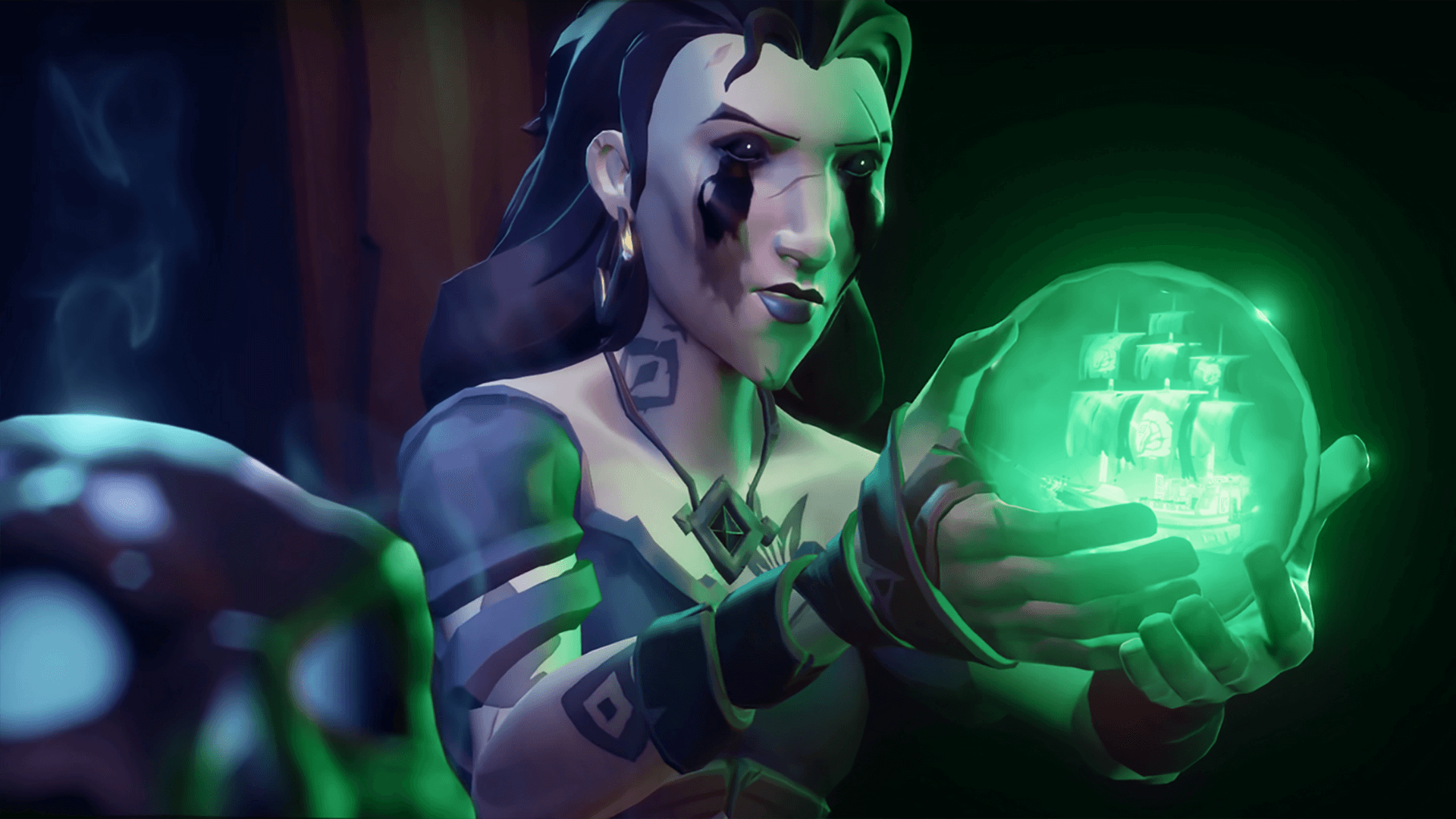 The Order of Souls are no longer concerned with just land-based threats. As Flameheart’s control of the Sea of Thieves grows, the Order of Souls have been receiving reports of ghostly vessels haunting nearby islands.

To push back against Flameheart’s latest efforts, the Order of Souls are now selling voyages targeting these Ghost Ships in hopes of fending them off! It’s time to take the fight to Flameheart!

What are Ghost Ship Voyages?

The new Ghost Ship Voyage will task players with taking on a targeted fleet of Ghost Ships that haunt the shores of a particular island in the Sea of Thieves.

Similar to the Skeleton Captain Voyages we are used to, these new voyages will have you going after a bounty set upon a fleet of Ghost Ships instead of Skeleton Captains.

The voyage consists of a single quest that will direct you to an island where the Ghost Ships have been seen. As you sail towards the island, you should see it surrounded with the Ghost Ships in question.

While the Ghost Ships directly summoned by Flameheart are part of a World Event, the Order of Souls Ghost Ship Voyages provides a on-demand Ghost Ship battle!

Where do I purchase a Ghost Ship Voyage?

You can purchase the Ghost Ship voyage from any Order of Souls representative on any Outpost. The voyage is scaled to your current Order of Souls Rank similar to the Skeleton Bounty voyages.

As with all voyages purchased from the Trading Companies, the difficulty and reward will be higher the higher your Rank is.

One thing to note though is you must be at least Rank 25 in the Order of Souls before purchasing the voyage. The Order of Souls recognizes the difficulty of such a voyage and is looking for experienced bounty hunters.

If you do not meet the Rank requirements, no need to worry this month! Your good friend Duke is selling a version of the voyage that will have you sinking haunting Ghost Ships!

How to prepare for the Ghost Ship Voyage

The Ghost Ship Voyage is a smaller version of the Ghost Ship World Event. In the guide we created for the World Event, we go over what new tricks these Ghost Ships have up their sleeves and how to defend against them.

Before heading onto your voyage, it might be worth a quick glance so you can better understand this new foe! You’ll learn about new cannonballs, ghost mines and more!

How to complete the Ghost Ship Voyage?

Once you have your voyage and hand and have successfully voted on it, you will have the quest in your Map Radial. Open it up and look for what island the Ghost Ships are haunting. Sail on over and prepare for a fight! The Ghost Ships will have spawned by the time you arrive.

The Ghost Ship Voyage is comprised of two waves. You will have to defeat each wave to complete the entire voyage.

Depending on the Rank of your Order of Souls Voyage purchased, the first wave will have you fighting against up to ten Grunt Ghost Ships at once! Don’t worry though. You do not need to defeat all ten to complete the wave.

It is also important to note that each Grunt Ghost ship only takes three cannonballs to be defeated. After defeating a Ghost Ship, you can expect another one to emerge from a portal taking its place.

You will have to sink seven of the ships to complete the wave.

Once seven of the ships have been dispatched, the remaining vessels will flee and the next wave will start.

Try to single out Ghost Ships on the outer perimeter of the island. You’ll want to avoid sailing right into the middle of the group as it will be easy to become overwhelmed from all the possible cannons firing at you.

The Formation Leader ship will require ten cannonballs to defeat instead of three like the Grunt Ghost Ships.

Once all the Formation Leaders are defeated the voyage is complete!

While you can find chests, skulls and crates in the World Event, the Order of Souls Voyage will only reward skulls. Collecting these skulls will help you progress through the Hunter of the Damned Captains commendation and snagging these beautiful sails!

Congrats on completing your first Ghost Ship Voyage! You’ll be doing this voyage a few times as it is an easy way to collect the Damned Skulls. These skulls are required for completing the commendation tied to the Ghost Captain Sails sold by Duke in the tavern.

The idea of these is great, but yet again Rare forgets that sloops are a thing… just not viable with the amount of consistent damage you take. The voyage and loot should be scaled to the ship size!

Im solo sloop 90% time and have successfully complete several of the voyages, Flamehearts event however i haven’t managed to complete solo, but 8 times at least duo sloop.

I have finished flamehearts event all the way to the final wave without taking a hit as a sloop. Imo it’s actually easier with a smaller more agile ship.
Galleons are a nightmare due to the two decks to repair.

I agree that Gallions are the worst, especially when inexperienced players don’t fully understand how to contribute.