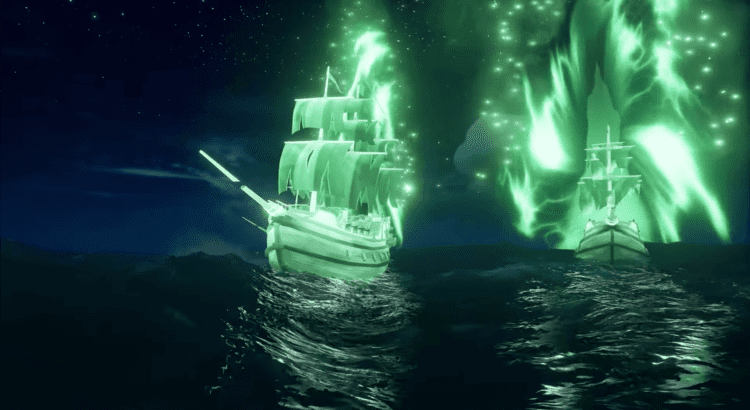 UPDATE: The Haunted Shores has just released and that means the Ghost Ships are now roaming the Sea of Thieves! Head on over to our Ghost Ship World Event guide here to learn how to take on Flameheart and send those Ghost Ships back to where they came from!

These Ghost Ships provide an on-demand sea-based threat for players to put their sailing skills to the test! Ghost Ships come in packs and will require players to maneuver around and defeat large fleets of ships.

If having to fight against a giant fleet of ships wasn’t enough, you’ll have to contend with the new ammunition these ghost ships have been equipped with!

Phantom Cannonballs are ghostly spirits that can be shot at your ship from the cannons of the Ghost Ships. While easy to spot since they are giant ghosts, they still pack quite a punch!

You do not want to get hit with one of these cannonballs! Wraith cannonballs come in the shape of big spectral faces that hit like a shotgun blast. You can expect a large knockback and several holes after coming in contact with this screaming face!

You won’t get away with just trailing a Ghost Ship like you might a Skeleton Ship. If a Ghost Ship senses you being on their six, they will drop ghost mines that will explode with great force!

You can shoot them to blow them up before they get near their ship if you are a quick enough shot though!

We cannot wait to challenge ourselves against these massive fleets of Ghost Ships when Haunted Shores releases! The new cannonballs, mines and overwhelming amount of ships at once is sure to make for some fun and hectic memories!