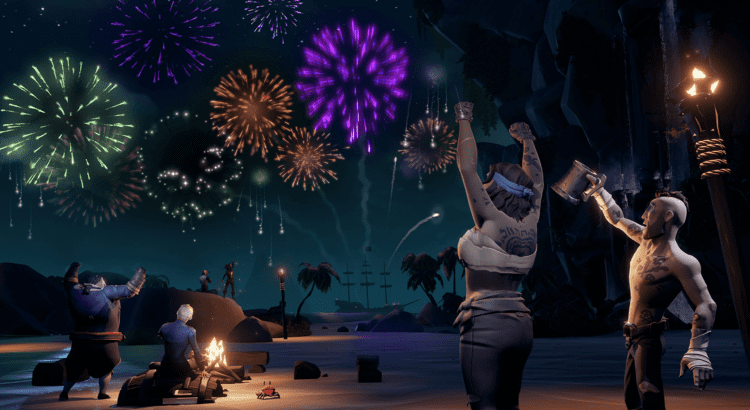 Larinna has prepared another brand new challenge for all the festive pirates across the Sea of Thieves. To ring in the New Year while earning several new cosmetics, you’ll want to partake in the Grogmanay celebration!

The Grogmanay Challenge contains six fiery goals that will have you utilizing some of the hottest tools the Sea of Thieves has to offer to complete them!

You’ll have until January 20th to complete this challenge and walk away with the cosmetics tied to the challenge. The cosmetics up for grabs are the Order of Souls Bucket, the Frostbite Cannons, and the Paradise Garden Cannon Flare. You’ll earn one of these cosmetics for every two goals you complete.

After January 20th, the Order of Souls Bucket and Frostbite Cannons can be purchased from Outpost stores after completing specific commendations, while the Paradise Garden Cannon Flare will head back to the Pirate Emporium.

You or your crew must turn in 3 Chests of Rage to the Gold Hoarders.

The Chest of Rage is a type of Cursed Chest introduced in the Crews of Rage update. You can usually find Chests of Rage randomly washed up on islands or in the Molten Sands Fortress vault. Fortunately for us, there is another and much easier way to find a Chest of Rage.

To knock this goal out quickly, you’ll want to take advantage of Larinna’s Black Powder Stash voyages. These time-limited voyages offer a simple way to obtain a Chest of Rage!

Purchase any one of the three Black Powder Stash voyages from Larinna and vote on the voyage. The voyage consists of two chapters that each will have you completing X Marks the Spot quests.

The critical chapter of the voyage is the final one. It has one X Marks the Spot quest with several Xs to find. One of the Xs to dig up for this quest will uncover a Chest of Rage! You’ll also come across an Ashen Winds Skull that will be used in several other goals in this challenge.

Once you have dug up the Chest of Rage, deliver it to a Gold Hoarder representative on any Outpost for credit. Do this voyage two more times to turn in two more chests to complete this goal!

Ashen Winds Skulls are one of the many tools found in the Sea of Thieves. This tool in particular acts as a flamethrower that can set skeletons, pirates and ships ablaze. You can usually find them in the loot awarded after completing an Ashen Lord World Event.

Lucky for us, like the Chest of Rage, you can also find Ashen Winds Skulls in the final chapter of a Black Powder Stash voyage that Larinna is selling.

Complete any one of the three Black Powder Stash voyages to swiftly acquire an Ashen Winds Skull.

Once aboard, you’ll want to start lighting the ship on fire by activating the Ashen Winds Skull. You can use the Ashen Winds Skull like you would a handheld weapon by pressing Right Trigger or Left Click. Fire will come out of the skull’s mouth for as long as you hold down the button until the skull runs out of fuel.

Focusing the flame that comes out of the skull’s mouth on the mast, capstan, or wheel of the Skeleton Ship will quickly set the ship on fire.

As soon as you light the ship, you will have completed the goal! Anyone in your crew can pull off this mighty task and it will count for the entire crew.

As we mentioned above, you can easily get an Ashen Winds Skull on-demand from the Black Powder Stash voyages that Larinna is selling. No need to wait for an Ashen Lord World Event.

Purchase any one of the three Black Powder Stash voyages from Larinna and vote on it. During the second and final chapter of the voyage, you are guaranteed to dig up an Ashen Winds Skull.

With your portable flamethrower in hand, it’s time to find some poor skeletons to light on fire. Any skeletons will do for this goal. For a guaranteed way to find skeletons, you can always complete an Order of Souls voyage or take on an active Skeleton Fort.

You can also visit random islands in the Sea of Thieves and kill any ambient skeletons that are roaming the island or spawn while you are there.

As soon as you light your tenth skeleton on fire with the Ashen Winds Skull you will complete the goal.

Kill 3 Bone Skeletons at the same time by shooting a Gunpowder Skeleton 5 times.

You also need to make sure you are killing Bone Skeletons. Plant Skeletons, Gold Skeletons and Shadow Skeletons will not count for this goal. Make sure the skeletons near the Gunpowder Skeleton are your regular plain old skeletons.

Where can you find Gunpowder Skeletons?

Gunpowder Skeletons randomly spawn so there isn’t really a guaranteed way to find them. They can be found randomly on islands, during Order of Souls voyages and at active Skeleton Forts.

You’ll come across plenty while taking on a Skeleton Fort. The tricky part of a Skeleton Fort will be getting a wave of Bone Skeletons with a Gunpowder Barrel and not a wave with a different type of skeleton.

One thing to keep in mind is Bone Skeletons are more likely to spawn around you while you have an active voyage. You also have a better chance of skeletons spawning the higher rank the voyage is. We have had good luck finding Gunpowder Skeletons with several Bone Skeletons while working on Gold Hoarder Treasure Map voyages and Athena’s Fortune voyages.

Not only will you be running around islands looking for treasure with an active voyage, but you’ll also have a chance to be ambushed by Bone Skeletons when digging up treasure from the voyage.

For you Pirate Legends, you can always run through the Athena’s Run of Thieves’ Haven voyage that Larinna is selling. That voyage is notorious for spawning plenty of Gunpowder Skeletons while trying to complete the voyage.

Once you shoot your fifth grouping of Bone Skeletons with a Gunpowder Skeleton you will complete this goal.

You or your crew must turn in Ashen Winds Skulls to the Order of Souls.

You’ll need to sell several Ashen Winds Skulls to the Order of Souls to complete this goal. While you normally will find Ashen Winds Skulls after completing an Ashen Lord World Event, there is a time-limited voyage that makes it much easier to acquire!

You can quickly get an Ashen Winds Skull whenever you please by completing any one of the Black Powder Stash voyages that Larinna is currently selling.

Set 20 skeletons on fire, helping them get into the mischievous Grogmanay spirit.

You can set skeletons on fire in multiple ways, but the two most straightforward ways are using Firebombs and the Ashen Winds Skull.

Firebombs can be found in resources barrels across the Sea of Thieves. Your ship is also stocked with several when you start a new session on the sea. Once you have some Firebombs in hand, simply equip and throw your Firebomb at any skeleton to get credit for this goal. Finding a group of skeletons to make the most Firebomb would be ideal.

With the current Black Powder Stash voyages that guarantee an Ashen Winds Skull, using one of these flame-throwing skulls might be the easier of the two methods.

Once you acquire an Ashen Winds Skull, find any skeleton or group of skeletons and unleash your skull on them. The fire that spews from the skull’s mouth will instantly set any skeleton in its reach on fire.

Once you have set 20 skeletons on fire, this goal will be complete!

There are a total of three cosmetic rewards you can earn for completing goals in the Grogmanay challenge.

Completing any two of the goals from the Grogmanay Challenge will award you with the Order of Souls Bucket!

Completing any four of the goals from the Grogmanay Challenge will award you with the Frostbite Cannon!

Completing all six of the goals from the Grogmanay Challenge will award you with the Paradise Garden Cannon Flare!