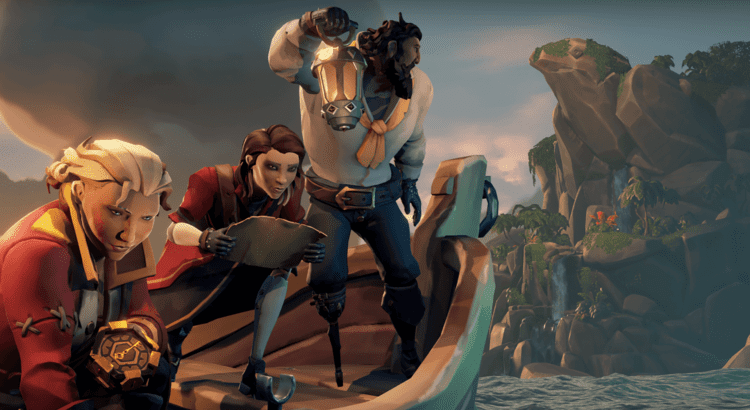 The Gold Hoarders were at a loss for where to hide their riches after the events at the Shores of Gold went down. They needed a new location, just as secure as the last, to protect their mountains of treasure.

As a security precaution, the Gold Hoarders hid and buried the Vault Keys on random islands. They then took the only maps of the Vault Key locations and tore them up into little pieces! These Torn Map Parchments are now scattered across the Sea of Thieves.

This all initially seemed like a great idea! Unfortunately, it ended up being a not so great idea…

The Gold Hoarders have heard rumors that their Treasure Vaults are under threat from Flameheart! The Trading Company is now asking any willing pirate to retrieve their Vault Keys. They are hoping to collect them all and keep them under close protection.

This key recovery mission takes the form of a brand new Gold Hoarder voyage! It is like no other voyage you’ve experienced in the Sea of Thieves. You will only be able to complete the voyage with a unique tool, the Golden Wayfinder!

With the Golden Wayfinder, you and your crew will hunt down Vault Keys and decide what to do with them. Sell them back to the Gold Hoarders as they’ve asked? Or discover what riches await in the Treasure Vaults they protect!

For any pirate wanting to rest their eyes from reading, we have a video guide to help you complete the new voyage right here:

What is the Golden Wayfinder?

You will only be able to equip this new tool during the Golden Wayfinder voyage sold by the Gold Hoarders.

How to use the Golden Wayfinder

The Golden Wayfinder compass has one needle on it that will point you in the general direction of Torn Map Parchments. This needle will sway and spring back and forth on the compass as you hold it.

You will first want to turn around with the Golden Wayfinder in hand until the needle is swaying on the top part of the compass. Just like you would with a normal compass, keep the needle facing forward as you hold it. Now that we have the general direction we need to head figured out, it’s time to understand the needle movement.

A Game of Hot and Cold

Now usually you would follow the needle of the compass to where you need to go but this needle has a range as it is always swaying. You’ll want to head to where the middle of the needle’s sway is. Once you have your heading, start sailing in that direction.

You’ll know you are getting closer to the island where the Torn Map Parchment is because the needle sway will get smaller and faster.

Once you arrive at the island the Golden Wayfinder is directing you towards, you’ll notice the needle movement will become snappier and more excited. Instead of swaying the needle will bounce quickly from side to side. If your needle is not snappy and still swaying, you might not be on the right island.

As you get closer to the Torn Map Parchment, the needle’s movement will become even more frantic. The needle’s bounce will be so small now that you can just follow where it is pointing.

Follow the needle as the bounce becomes smaller and smaller until the needle starts spinning rapidly around in a circle.

Once the needle is spinning 360 degrees you’ll know you are in the dig area. Pull out your shovel and start digging. You will soon find bottle with a Torn Map Parchment in it.

If you are having difficulty finding the Torn Map Parchment, pull out the Golden Wayfinder again and make sure you are still in the dig area.

Now that we know how to use your new tool, let’s break down the voyage. The voyage will have you tracking down several Torn Map Parchments. You will use these map pieces to assemble a map. This final constructed map will reveal an island with a X Marks the Spot on it. This X is the location of the Vault Key!

The Golden Wayfinder Voyages are available to any pirate who is reputation 25 with the Gold Hoarder Trading Company.  The voyages can be purchases from any Gold Hoarder Representative. If you are not Rank 25, you can still partake in the voyage if someone in your crew is and purchases the voyage.

As soon as you vote on the voyage, you’ll find the Golden Wayfinder in your Quest Radial. Pull it out and figure out which general direction you need to sail.

You will be finding up to six different Torn Map Parchments depending on your Gold Hoarder reputation level.

Torn Map Parchments are always on islands. This means you’ll never have to worry about swimming below the water’s surface to find them.

Picking up the first piece of torn map parchment will add the new map to your Quest Radial.

While not common, it is possible to find more than one Torn Map Parchment on a single island. So while you are using the Golden Wayfinder, keep that in mind if you are confused when it points you to the same island.

If the Golden Wayfinder’s needle is still snappy and bouncy after pulling it out on the island you just discovered a Torn Map Parchment on, stay on the island and find the next one.

An interesting thing to note is that you can get very lucky and discover where the X is on the Vault Key map you are assembling early. A Torn Map Parchment you dig up could have it on it before you have found the last one needed to fully construct the Vault Key map.

If you can figure out which island the Vault Key is on and the location of the X is visible on it, you can skip straight ahead and dig up the chest with the key. No need to find the other torn map parchments! You’ll complete the voyage and acquire the key.

This isn’t as unfortunate as you think though! These skeletons have a chance of dropping treasure artifacts upon death! It’s hard not to be excited when there is extra loot involved!

Keep collecting the Torn Map Parchments until you can decipher the island and the location of the X on the Vault Key map.

What Island is the Key On?

The map you are piecing together will also always be a large island. This will help you narrow down which island you need to head to if you can skip ahead early.

Sail on over to the island you have revealed and dig up the treasure that awaits you! You will complete the voyage as soon as you correctly dig the X and the Golden Wayfinder will be removed from your Quest Radial.

Once you have dug at the X on the map you pieced together you will find a Collector’s Chest with the Vault Key inside. Depending on your Gold Hoarder Reputation, you’ll either find a Stone Vault Key, a Silver Vault Key or a Gold Vault Key.

What’s the difference between the Vault Keys?

There are a couple of differences between the Stone, Silver and Gold Vault Key. If you decide to sell the Vault Key to the Gold Hoarders or Reaper’s Bones, you’ll receive roughly the following amount of gold:

Where is the Treasure Vault?

Once you uncover a vault key, you can either sell it back to the Gold Hoarders or Reaper’s Bones. You can also decide to locate what it unlocks. The choice is yours! Each vault key will be named after the island it belongs to, you must take the key there and locate the vault entrance.

If you still can’t find the location of the Treasure Vault, be sure to check out our guide here that shows you the location of each and where to place your Vault Key to unlock it.