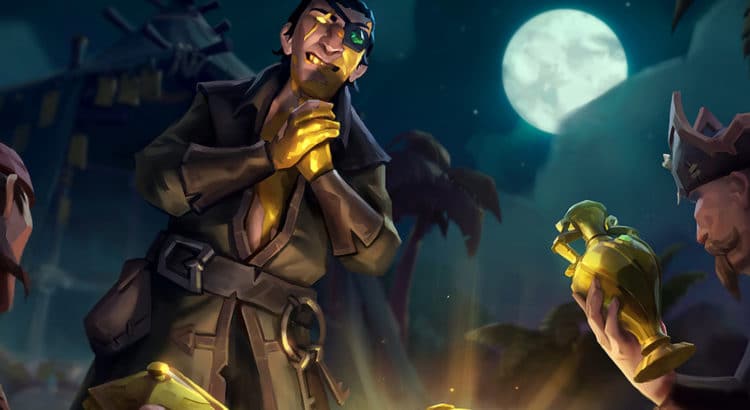 Hopefully, you’ve gotten your sea legs in these early weeks of the game because this adventure is just getting started. New goals, new rewards, new items, new mechanics, and whole new worlds will be coming to the Sea of Thieves at a rapid pace!

Beginning in May and continuing twice more through the summer, Rare has three major content drops planned. They unveiled just enough tantalizing details to excite our imaginations.

There’s more than the new AI threat to get hyped about in the Hungering Deep. There will be:

This last feature—new tools for communication—will likely be quite important because the Hungering Deep also creates new game play by bringing more players together to “uncover” the new AI threat.

In the video, Rare says the name of this content update is, “alluding a little bit to what’s in there,” but our imaginations are still running wild!

We do know that this update will include a new ship type and crews of different sizes.

Each new content update will bring exciting new challenges, but Forsaken Shores might provide pirates with their biggest challenge yet. Forsaken Shores is described as more fantastical, but also “much more perilous.”

At least in part, that peril will undoubtedly be found when encountering yet another new AI threat! See wild speculation above…

These content updates are major, but Rare unveiled something else that is going to infuse the game with unremitting novelty and excitement: Weekly Events!

Yep. Sea of Thieves will have new adventures every. single. week. The weekly events will be centered around a newly introduced element to game.

More specifically, this is when we’ll likely see cursed cannonballs and skeleton thrones introduced.
Participating in these weekly events will be alluring for two additional reasons:

Pour some grog and sing a shanty!

Sea of Thieves is a vast, rich world—but we’ve only seen the proverbial “tip of the iceberg.”

One thought to “Sea of Thieves Content Plans Recap”