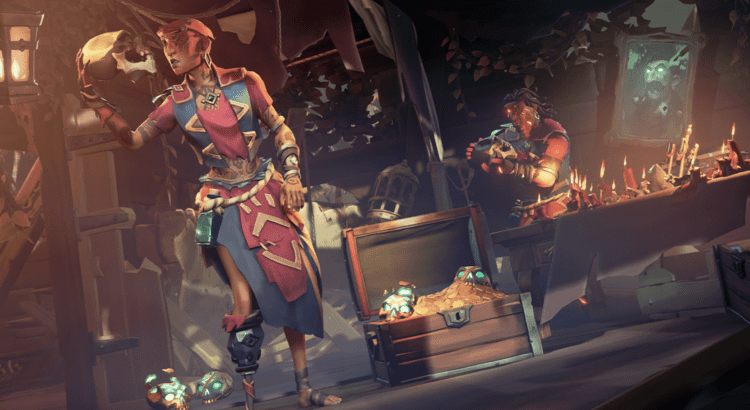 Seeing as this is an “Event” you might assume that it is spearheaded by Larinna and the Bilge Rats. However, this “Event” was actually initiated Madame Olivia and the Order of Souls.

There have been a series of strange disappearances throughout the seas—entire crews vanishing without a trace. The Order of Souls can sense the dark forces at play, but they’ll need to sharpen their senses if they are to divine any further clarity.

This is where pirates come in.

It seems that whenever we pirates slay the undead, Soul Fragments are released into atmosphere. As the atmosphere becomes increasingly saturated with souls, the Order’s of Souls’ readings become increasingly clear.

To incentivize the hunting and slaying of any and all skellie and ghost threats, Madame Olivia has set forth the Champions of Souls Event!

What is the Champions of Souls Event?

For the Champion of Souls Event, the Order of Souls will be keeping track of the Soul Fragments you release every time you slay the undead—like a point system.

For this Event, the Order of Souls has curated a list of Challenges, which show pirates how many Soul Fragments they’ll release for various feats.

These Challenges include on-demand bounties, emergent threats, and World Events!

Even better, the challenges are repeatable. So, you can choose to complete whichever challenges you prefer, as many times as you like, to collect those Soul Fragments.

How long is the Champions of Souls Event?

The Champion of Souls event starts on February 4th and lasts until February 18th.

What are the Champions of Souls rewards?

Madame Olivia is incentivizing pirates in lending a helping hand by offering a batch of brand new Order of Souls cosmetics! The more Soul Fragments you collect, the more cosmetics you will unlock!

The cosmetics available to those who earn enough Soul Fragments are the Order of Souls Cutlass, Blunderbuss, Flintlock, and Eye of Reach. You will also unlock the “Champion of Souls” Title after unlocking all four weapon cosmetics.

Will the rewards be available after the Event?

Like previous events, these cosmetics will return to the Outpost Stores after the event is over. However, before you can unlock and purchase them, they will require new challenges to complete.

How to unlock the Order of Souls Weapon Cosmetics

To unlock the Order of Souls Weapon Cosmetics you will need to collect Soul Fragments by completing repeatable challenges.

The challenges that give Soul Fragments can be completed as often as you like in order to increase your total amount of Soul Fragments and reach the targets required each cosmetic.

You can track your progress in-game in the Special Events menu. There you will see how many Soul Fragments you have collected.

Collecting your first 50 Soul Fragments will unlock the Order of Souls Cutlass.

Collecting 100 Soul Fragments will unlock the Order of Souls Pistol.

If you can collect 200 Soul Fragments, you will earn the Order of Souls Eye-of-Reach.

Once you have released 350 Soul Fragments, you will earn the Order of Souls Blunderbuss.

Finally, for all you title hunters out there, if you manage to tally up 500 Soul Fragments, you will earn the “Hoarder of Souls” Title.

What are the Soul Fragment Challenges?

The challenges that award Soul Fragments range from taking out Ghost Ships to defeating a mighty Ashen Lord!

For every Ghost Ship you scuttle you will earn two Soul Fragments. As the challenge description states, you can find Ghost Ships during one of the Order of Souls Ghost Ship Voyages or the Burning Blade World Event.

While two Soul Fragments does not sound like a lot, it adds up due to the sheer amount of Ghost Ships you will encounter in both the voyage and World Event.

You can easily take out over 30 Ghost Ships by completing the Burning Blade World Event!

…defeating Skeleton Captains, either during an Order of Souls Bounty Voyage or in a natural encounter.

Any Skeleton Captain you find and defeat in the Sea of Thieves will earn you ten Soul Fragments.

…finding and defeating Ashen Guardians or Ashen Key Masters somewhere on the seas.

Ashen Guardians and Ashen Key Masters are a type of Skeleton Captain that can randomly spawn on islands across the Sea of Thieves. You can easily differentiate them from normal Skeleton Captains by the large red glow that hovers around them.

One Ashen Guardian and one Ashen Key master is also guaranteed to spawn on the second to last wave of a Skeleton Fort World Event.

Killing just one will award you with a hefty 25 Soul Fragments.

…defeating any of the four Ashen Lords. Head for a swirling Ashen Winds Cloud!

An Ashen Lord can be found underneath an Ashen Winds Cloud. As soon as you see a fiery tornado rotating in the sky, sail on over and prepare for a grueling battle.

Defeating an Ashen Lord is no easy feat! They have three stages of damage you will need to whittle through before you can earn your 50 Soul Fragments.

We have an in-depth guide here on what you can expect from a fight with an Ashen Lord. We will show you each attack an Ashen Lord can perform and how to counter them.

…defeating any Skeleton Lord at an active Skeleton Fort.

Time to sail to that Skull cloud! There are three different Skeleton Lords you can encounter on the final wave of a Skeleton Fort World Event. Taking down any one of the three will award you and your crew with 50 Soul Fragments.

The Burning Blade can be found in the fourth wave of Ghost Ships during the Burning Blade World Event. It will be protected by several Grunt Ships and will take 20 cannonballs to take out.

The Burning Blade World Event can be one of the more difficult World Events due to the large number of Ghost Ships that can be firing on your ship at once. If you will be taking on Flameheart and his ghostly fleet for the first time or need a refresher, be sure to check out our guide here.

What challenges should you do?

Well, of course, some of this will depend on your particular server and your PvP preferences.

All things being equal, we think the Skeleton Forts are a great way to earn those Soul Fragments.

If you complete a Burning Blade World Event, you’ll earn 50 for defeating Flameheart’s Ship, and you’ll earn 2 for each Grunt Ship. You could end up defeating 30 Grunts along the way. If so, you’ll net 110 Soul Fragments or more. However, you could also end up defeating less than 30 Grunts—especially if another ship shows up half way through.

Sure another ship could show up at a Skeleton Fort, but it’s much easier for a ship to roll through the Burning Blade World Event and pick off a few Grunts for themselves, than it is for another crew to roll up on a Skeleton Fort and steal your kill against a Skeleton Lord.

Plus, at least in our experience, the Burning Blade World Event can be a bit more challenging than a Skeleton Fort.

Again, some of this will be dependent upon which World Events spawn during your time at sea, what the pirates around you are choosing to do, your PvP preferences, and perhaps even any Emissary Value or Renown you’re trying to earn along the way.

But, what about if all things are not equal?

Upon entering the Sea of Thieves, you will receive a Mysterious note telling you which enemies are particularly potent, and will thus release more Soul Fragments into the ether.

From February 4th to the 8th, Skeleton Captains will receive a boost from 10 to 20 Soul Fragments. You’ll want to focus your efforts on finding Skeleton Captains during this period. Completing Order of Souls Bounty Voyages with four Skeleton Captain’s per quest wouldn’t be such a bad idea.

From February 12th to the 15th, Grunt Ghost Ships will double from 2 to 4 and the Burning Blade will double from 50 to 100. Running an Order of Souls Ghost Ship Voyage or taking on Flameheart would be ideal during this period of time.

From February 15th to the 18th, Ashen Lords will go from 50 to 100 Soul Fragments, while Ashen Guardians and Ashen Key Masters will go from 25 a piece to 50 a piece.

Alright, pirates. That about does it. You know what this Event is all about. How to earn Soul Fragment Points—and how to do so a bit more efficiently.

If anything changes, or we glean any additional insight, we’ll be sure to add it to the guide.

If you have any questions, any peculiar findings, or hilarious encounters throughout this event, feel free to share in the comments below.

Until next time, Happy Sails!