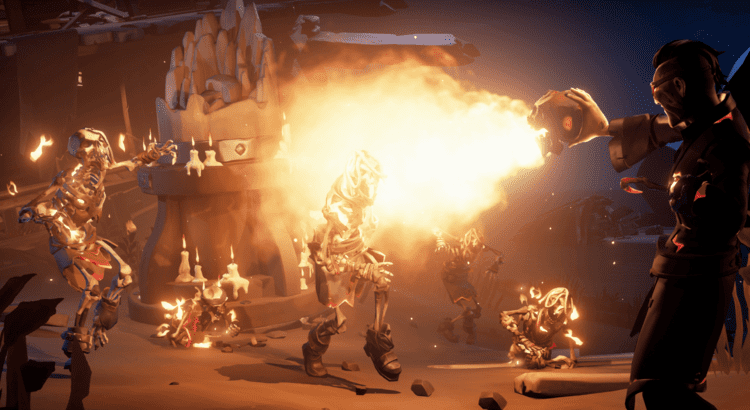 Flameheart has summoned his formidable Ashen Lords to Sea of Thieves! These new land-based threats bring a whole new challenge for any brave pirate to conquer. They also bring with them a devastating new reward, the Ashen Winds Skull!

To learn more about Ashen Lords, you can head over to our Ashen Lords World Event Guide here. If you’d like to know more about the Ashen Winds Skull and how to wield the new in-session progression weapon, read on below!

What is the Ashen Winds Skull?

The Ashen Winds Skull is a unique reward that is dropped by any defeated Ashen Lord.

The interesting thing about this reward is that it can also be used as a weapon! This dual purposed item gives players a choice once acquiring it. Sell it for gold to the Order of Souls or use it as an in-session progression weapon.

When wielded, the skull can be used like a Flamethrower! It releases a jet of raging fire that can set nearby players, skeletons and ships ablaze!

The Ashen Winds Skull has a finite amount of charge inside it though. Once drained the skull can no longer be used as a weapon and is worth very little.

The skull visually displays its remaining charge with the glowing intensity of crystal inside of it. When the crystal begins to dull, you’ll know you are running low on charge.

How to get an Ashen Winds Skull

Watch out for any nearby crews that are also trying to acquire the Ashen Winds Skull! Just because you killed the Ashen Lord does not guarantee you the skull.

How to use the Ashen Winds Skull

The Ashen Winds Skull does not take up a weapon slot. You equip it by holding it like you would any piece of treasure in the Sea of Thieves.

Once in your hands, press your Primary Use button which is most likely Right Trigger on console and Left Mouse Button on PC.

This will cause the skull to emit a large flame from its mouth lighting players, skeletons or ships in close proximity on fire!

While carrying the skull you will move slower just as you would while carrying any other piece of loot. If you need to start moving in a hurry, drop the skull and come back to it!

Where do you sell the Ashen Winds Skull?

You can sell the skull to the Order of Souls even if it is empty with zero charge left.

As it is a skull, the Reaper’s Bones will also accept the skull from you in exchange for gold.

How much is the Ashen Winds Skull worth?

The less charge the Ashen Winds Skull has in it the less it is worth. If you would like to sell it for maximum value and unlock the related commendation, Skull of Fire, be sure to grab the skull right away after defeating an Ashen Lord and sail right for an Outpost.

The amount of Gold the skull is worth is directly related to how much charge it has remaining. It is most valuable when it has full charge, it is worth less and less value as it runs out of charge.