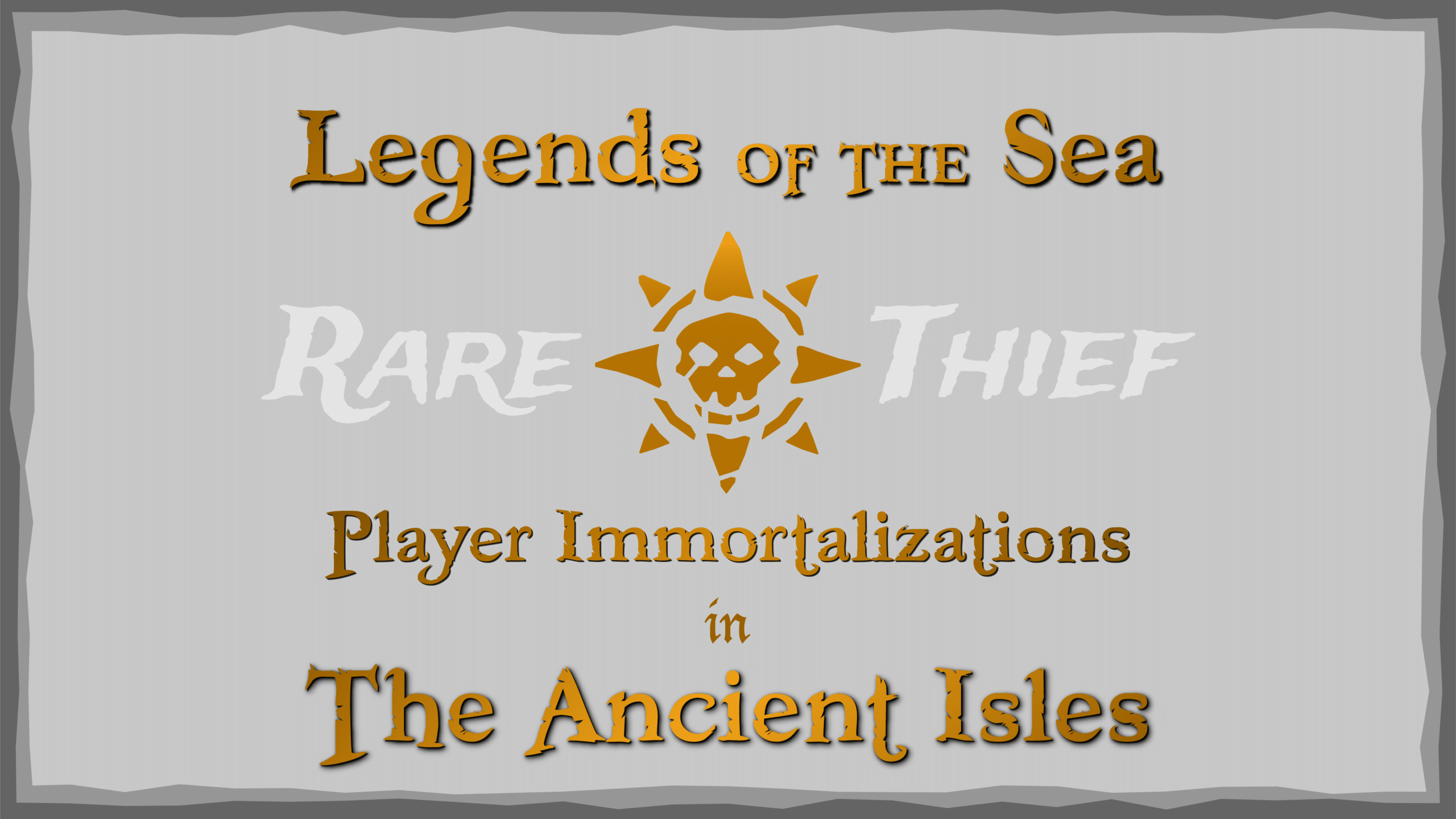 Legends of the Sea Locations in The Ancient Isles

Ah, so I take it you’ve heard about Umbra? Aye, the historian making camp on Lagoon of Whispers—zealously tracking and recording Legends of the Sea that she can ink onto parchment, or her skin.

This chronicler of Pirate Legends has us all seeking out tales of greatness throughout the Sea of Thieves!

Along the way, you may find yourself sailing down memory lane—recalling some of the most memorable moments at sea. You might also find yourself on a path of discovery—discovering how your fellow pirates have made their mark, and maybe getting a few ideas on how you might make your own.

More specifically, this article will guide your sails through the Ancient Isles, where you will find 12 of these pirate immortalizations and unlock their corresponding commendation. Though you can feel free to take these in any order you’d like, this article will begin in the East at Ancient Spire Outpost and end in the West at the Finest Trading Post.

If you need just an extra bit of guidance in finding the legend you seek, we have this handy companion video to take you step by step to its location!

Time to find us some legends!

Ancient Spire Outpost played host to a kind and gifted musician, who later sold her instrument.

The story behind “A Musical Family”

A violin belonging to Freya Catherine, a pirate with a musical gift who taught her children to play Becalmed.

Umbra’s note says that so many pirates cried, that they had to start bailing all the tears!

Where to find “A Musical Family”

Specifics: Inside the Equipment Shop you will find a violin laying in the left corner of the room.

See where this legend lies on your map: A Musical Family

…And Not a Drop Spilled

The tavern at Ancient Spire Outpost has an unusual sign dedicated to an unusual pirate.

The story behind “…And Not a Drop Spilled”

A plaque reading ‘LindsayElyse Mind Your Head’ was fixed here. She didn’t like taking the stairs and found a cannon more her style!

The tavern keeper decided to put this reminder up, in case LindsayElse had already started drinking before climbing into the cannon.

Where to find “…And Not a Drop Spilled”

Specifics: Right above the entrance to the tavern on top of the Outpost is a plaque dedicated to this daredevil pirate.

See where this legend lies on your map: …And Not a Drop Spilled

In the tavern at Ancient Spire Outpost, there is a painting of four very fancy pirates.

The story behind “Dressed to Impress”

This painting captured four of the fanciest pirates ever to sail the Sea of Thieves. They loved dressing up at gatherings of likeminded sailors.

Where to find “Dressed to Impress”

Specifics: Inside the tavern on the left wall you will find a portrait of some very well dressed pirates.

See where this legend lies on your map: Dressed to Impress

The story behind “Nesting Spot”

The Mark of The Crow’s Nest, run by Captain Jay – a pirate who shouted their stories for all to hear. They practically turned this fort into an amphitheater.

Where to find “Nesting Spot”

Specifics: You will need to cannon yourself to the top of the fort to find this mark. Once you land on the spire on top of the main fort structure you will find The Crow’s Nest logo painted on some wooden planks.

See where this legend lies on your map: Nesting Spot

A tavern regular at Plunder Outpost became part of the furniture.

The story behind “ZZ Marks the Spot”

This pirate drank so much that the Sea of Thieves almost became a desert!

Where to find “ZZ Marks the Spot”

Specifics: Inside the tavern just left of the barkeep you will find a plaque etched with the name of the pirate it is dedicated to.

See where this legend lies on your map: ZZ Marks the Spot

On Plunder Outpost, a pirate who liked high places came to rest in a hard-to-reach spot.

The story behind “Aim High”

Once Deadsniper discovered that they could fire themselves out of a cannon, they couldn’t stop!

After firing themselves from a cannon more times than anyone else, they finally landed here… a little crispy.

Where to find “Aim High”

Specifics: You will want to sail your ship to the East side of the outpost. Aim your cannon high as you will want to shoot yourself onto the highest peaks of the island. On a ledge overlooking the East sea you will find a burnt skeleton next to a sketched name in the mountain.

See where this legend lies on your map: Aim High

A famous reptile lover spends their time on an appropriately named island, atop a central shrine.

The story behind “Snake Charmer”

This basket belongs to Tartansnake, a pirate who continues to help many others – when he isn’t too busy talking about snakes.

Often, he just does both at the same time.

Where to find “Snake Charmer”

See where this legend lies on your map: Snake Charmer

Rumor has it that a strange scene was painted on a large rock on Chicken Isle.

The story behind “Dances with Chickens”

There’s a very odd pirate out there with cat-like reflexes, known as SayHeyRocco. When you hear ‘Mew Mew, Kiss Kiss’, you know they were coming!

When that pirate got hold of several chickens and the colored lights of the Ferry, things got even stranger!

Where to find “Dances with Chickens”

Specifics: On a large rock found on the West side of the island you will find a rock painting commemorating the great chicken rave lead by SayHeyRocco.

See where this legend lies on your map: Dances with Chickens

In Lost Gold Fort in the Ancient Isles, a list honors the greediest of pirates…

The story behind “Famously Frugal”

This list of noteworthy Gold Hoarders was made in the early days to ‘honor’ the greediest pirates around. Umbra has been seeking it for some time.

Where to find “Famously Frugal”

Specifics: On the bottom floor of the main fort structure you will find a note pinned to a wooden scaffolding in the back of the room. This note lists the ten highest earners from the early days of the sea!

See where this legend lies on your map: Famously Frugal

They say that where Merrick once camped on Shark Bait Cove, his son now displays a portrait.

The story behind “Familial Resemblance”

Met me son Derrick for the first time! Well, he says he’s me son. How can I deny it wiv a handsome mug like that?

Where to find “Familial Resemblance”

Specifics: On the South West outer ring of the island you will find a fishing camp. This is where a portrait of Merrick and his son Derrick has been placed.

See where this legend lies on your map: Familial Resemblance

A poetic pirate left a scruffy book inside a cave at Shark Bait Cove, beside a shrine.

The story behind “Scruffy Scribe”

Upon the Sea of Thieves, many stories have been told,

Of ancient creatures, hoards of gold and of pirates great and bold.

But the tales that matter the most, at least that is to me,

Are the ones of love and laughter, and friendship on the sea.

Where to find “Scruffy Scribe”

Specifics: On the North outer ring of the island there is a cave that can be entered from the inner island side. Head into the cave and follow it to the end until you find a journal laying on a rock.

See where this legend lies on your map: Scruffy Scribe

Putting the Ship in Friendship

At The Finest Trading Post is a fine work of craftswomanship.

The story behind “Putting the Ship in Friendship”

This model ship, ‘The Allegiant”, was lovingly crafted in fine detail by Chocomoojoo, to celebrate a year of smooth sailing.

Delivered with the help of a community of pirates, this gift is for everyone on the Sea of Thieves to enjoy.

Where to find “Putting the Ship in Friendship”

Specifics: Just behind the trader stationed at this Seapost is a mighty model ship in honor of Chocomoojoo.

See where this legend lies on your map: Putting the Ship in Friendship

Now that you’ve found the twelve Legends of the Sea that reside in The Ancient Isles, it’s time to track down the rest! If you’d like to continue the journey with us, we have the locations for the other 38 legends in the article below!

All Legends of the Sea Locations Guide 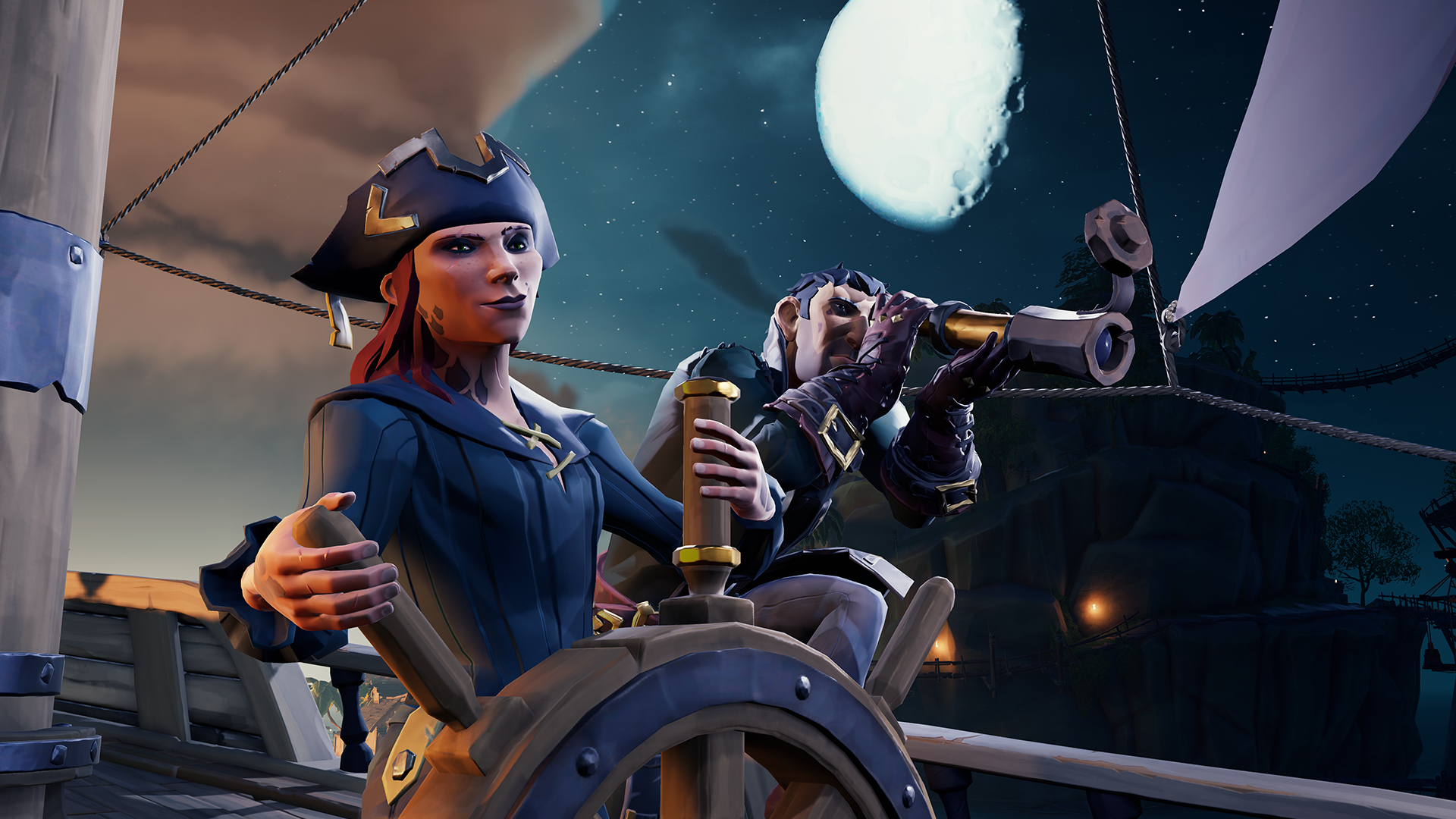 How to unlock a Legendary Title for your ship 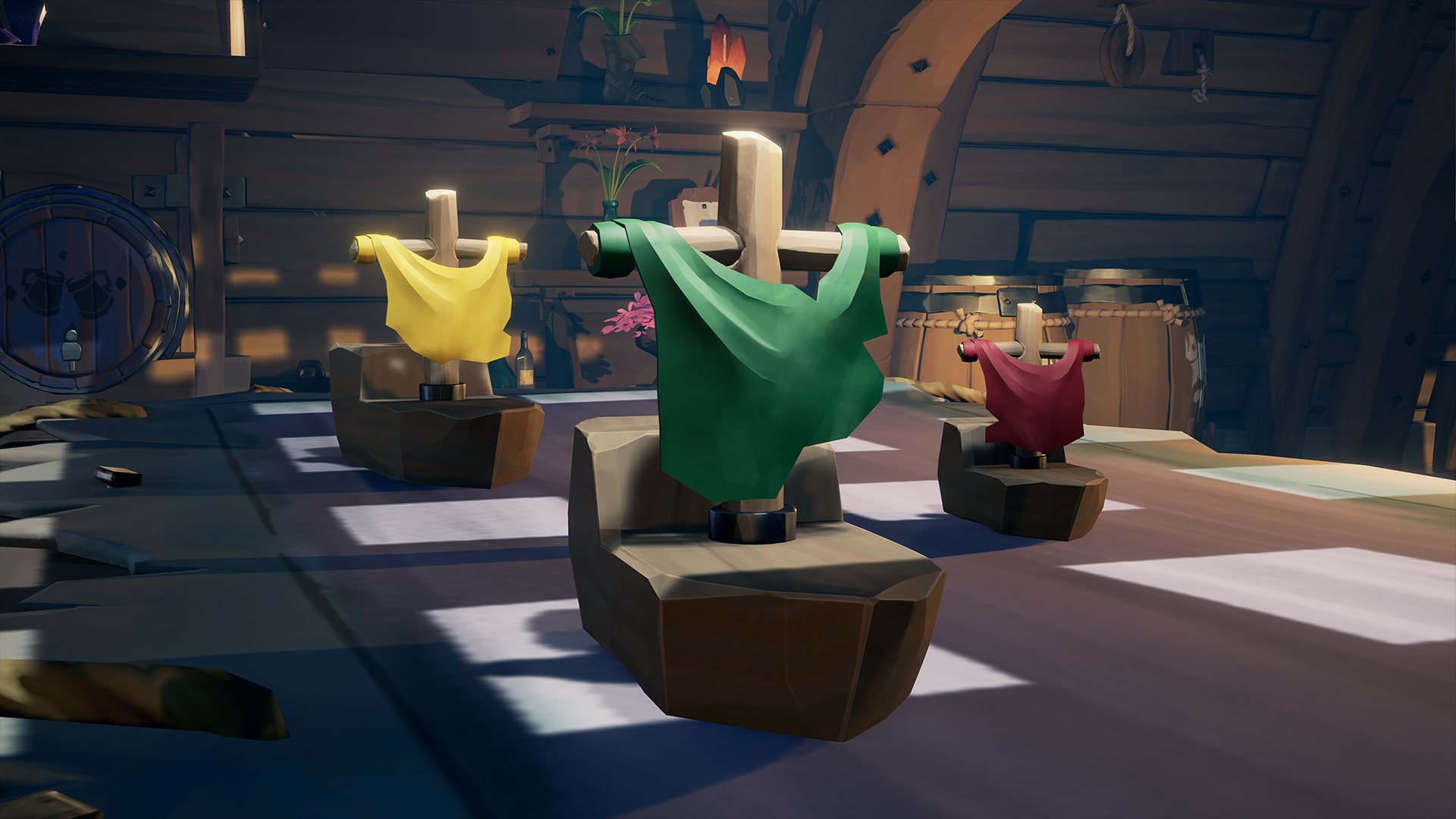 How to unlock the A Fleeting Fancy Achievement