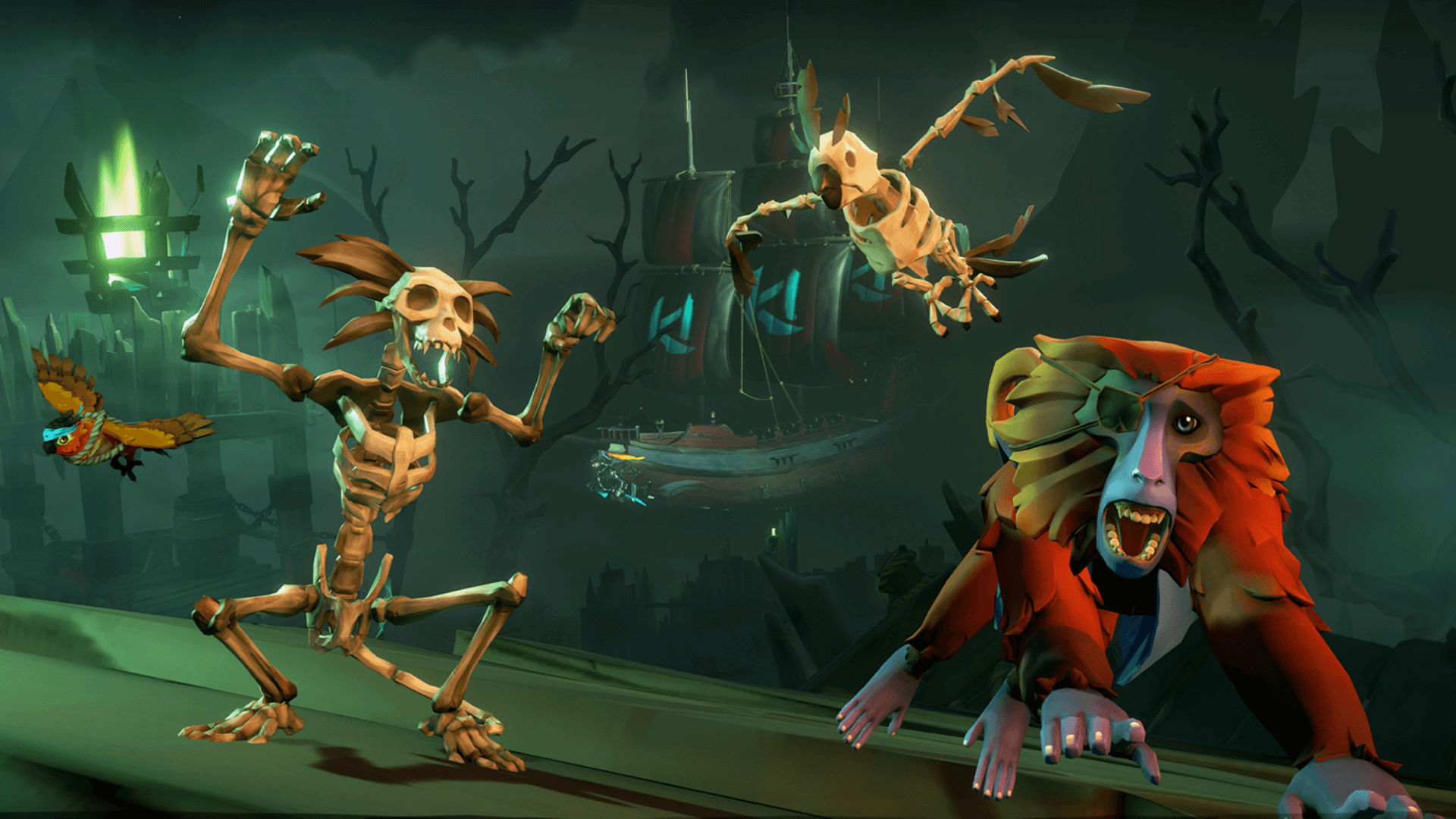 The second month of the Pirate Emporium being open and there is already two new pets to befriend! While they are still from the monkey and parrot variety, they are each particularly special for the month of October…

Prepare yourself for Skeleton Pets! While you might recoil at first glance from these boney creatures, you will soon find they are just as playful and lovable as their fleshy counterparts.

Along with skeleton pets, the Pirate Emporium is offering up even more emotes for your pirate to express and a brand new heritage ship collection to acquire, the Cutthroat Ship Collection!

Now that we have your curiosity, let’s dive in and take a deeper look into this month’s Pirate Emporium offerings!

The Pirate Emporium is celebrating this spooky month with skeleton pets! There is now the Skeleton Marmoset and Skeleton Cockatoo available for purchase.

They are both time-limited so if you want these little buddies for the long run, be sure to pick them up this month while you can!

The Skeleton Marmoset is 499 Ancient Coin and is Time-Limited to the Fort of the Damned update.

The Skeleton Cockatoo is also 499 Ancient Coin and also Time-Limited to the Fort of the Damned update.

These skeleton pets will be the perfect companions as you take on the Fort of the Damned this month!

Now when you and your pet go out to pain the sea red, you will have some options of what outfit you want to do it in.

Both the Capuchin Bilge Rats Outfit and the Barbary Bilge Rat Outfit are 249 Ancient Coin.

The Variety Emotes Bundle 1 is still available to purchase but on top of that the Pirate Emporium brought two brand new bundles!

The first bundle, the Variety Emotes Bundle 2, expands on what we love about the first one so much!

Getting frustrated at your crew for not raising the sells? Why not give them the Angry Fist emote from the helm?

Defeated a whole skeleton wave at a fort? You’ve earned to flaunt the Dust Shoulders emote.

Angry Fist and Dust Shoulders can be bought separately for 149 Ancient Coin. The rest can only be obtained by purchased the bundle for 999 Ancient Coin.

The second new bundle this month is the Taunt Emote Bundle. None of these emotes can be purchased individually but the whole bundle costs 499 Ancient Coin.

Included is the I’m Watching You, Chicken, Be Quiet and Go Away motes.

For those unfamiliar with Killer Instinct, it is a fighting game series created by Rare in the early 90s. The first title in the series debuted in arcades in 1994 and then made its way to homes via the Super Nintendo Entertainment System.

Why is this game so fitting for the Halloween season? Talk about scary! Killer Instinct prides itself on its diverse fighting roster that includes a werewolf, skeleton, raptor and more!

The Cutthroat Ship Collection which can be purchased for a total of 2,499 Ancient Coin includes the Figurehead, Sails, Hull, Wheel, Cannon, Capstan, Flag, Collector’s Figurehead and Collector’s Sails.

And there you have it! Another exciting month for the Pirate Emporium!

Whether you are looking for a new sailing companion, a new way interact with other pirates or some new ship cosmetics, this month’s Pirate Emporium offerings will have you covered.