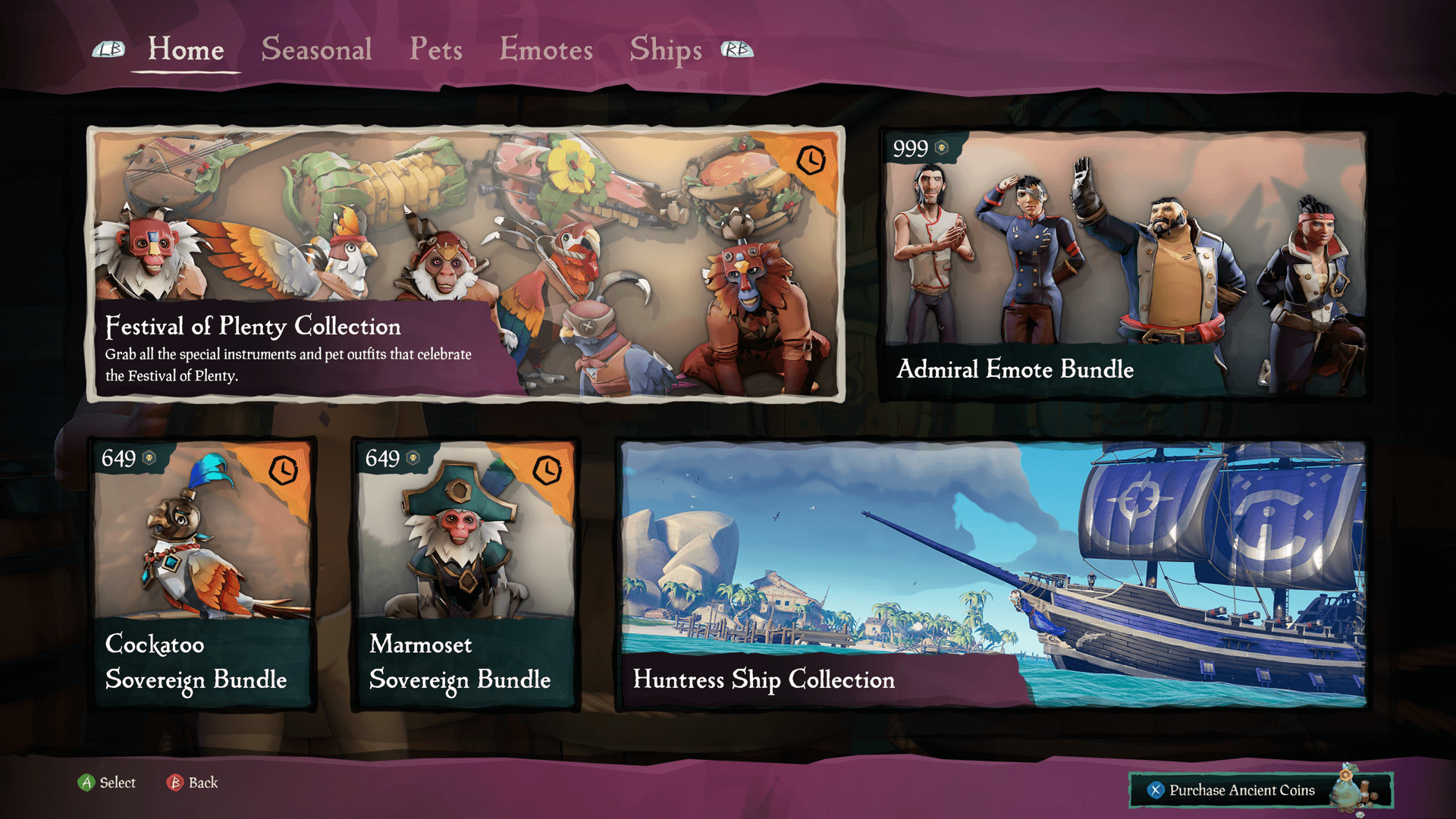 The Seabound Soul update has hit the Sea of Thieves! While the new Tall Tale has a more somber tone as you and Sir Arthur Pendragon go on a soul hunt, the Pirate Emporium additions bring a light and cheery feeling that every well-balanced pirate needs.

As you might expect, there are new pets, new emotes and a new heritage ship collection to purchase. Something unexpected though is a brand new category to the Pirate Emporium, Seasonal!

The brand new Seasonal section in the Pirate Emporium has a range of cosmetics for your pets and even instruments!

Now why are these cosmetics labeled as Seasonal? Well, these seasonal cosmetics appear to be Thanksgiving themed. For those unfamiliar with the holiday, here’s a tiny history lesson:

Thanksgiving is a national holiday that is celebrated mainly in the United States and Canada. It always takes place on the last Thursday of the month in November. Thanksgiving goes all the way back to an event that took place in the early 1600’s!

The Plymouth colonists were having a rough go of it starting out in their new country. It was tough for them to harvest the land and take advantage of the resources around them.

They were fortunate enough to have the help of some Wampanoag Indians who shared their knowledge of the land with the colonists. After a plentiful yield, thanks to the Wampanoag, the two groups shared a massive feast to celebrate and give thanks.

That is why you will notice many allusions to different foods in each of the cosmetics as well as colonial and Native American references in the pet outfits.

This cosmetic bundle is for you music lovers out there. It could also be for all you foodies as well! Included are brand new cosmetics for each of the four instruments available.

For 499 Ancient Coin, you can purchase the bundle that includes the Banjo of Plenty, Concertina of Plenty, Drum of Plenty and Hurdy Gurdy of Plenty.

If you usually only jam out on one instrument, you can purchase each of the four individually for 249 Ancient Coin.

While there are Festival of Plenty cosmetics for your instruments, there are also brand new seasonal outfit for your little pirate companion.

While the Cockatoo and Marmoset were available to purchase last month, we would say they have now officially arrived to the Pirate Emporium as you can now purchase their real-life counterparts.

As with the previous two monkeys, the Marmoset has five different color variations to choose from and all the same outfits available to the other two monkey types.

You can purchase a Marmoset all for yourself for 499 Ancient Coin.

Same goes for the Cockatoo. The Cockatoo is available to purchase with five different color variants and all the same outfits that you could buy for the other two kinds of parrots.

The Cockatoo is also for sell for 499 Ancient Coin.

If you want to class up your pet, these brand new Sovereign outfits are your answer! This new outfit is very regal and will be sure to impress any pirate on the sea!

There are so many emotes in the Pirate Emporium now you will see that there are now two pages for this one tab!

There are also now two new bundles to peruse!

The first bundle, the Admiral Emote Bundle, contains eight Admiral-themed emotes. These emotes are for pirates who would like to appear a bit more refined than the usual scallawag.

Meeting new pirates on the sea for the first time? Why not give them the Admiral Make Friends emote. You are sure to set a great first impression with such a classy move.

Every emote in this bundle is Bundle Only and can not be purchased separately. The Admiral Emote Bundle can be purchased for 999 Ancient Coin

This latest Variety Emotes Bundle has some of our new favorites included from the I Love You emote to the Despair emote.

This bundle of emotes includes I Love You, Despair, Cry, Jump Sit, Thumbs Up Clap, Trembling, Volunteer and Mocking Wave.

Only I Love You and Despair can be bought separately. The rest are Bundle Only.

You can purchase the Variety Emotes Bundle 3 for 999 Ancient Coin.

So far, Banjo-Kazooie and Killer Instinct have made grand appearances in the Pirate Emporium. Can you guess which heritage collection from Rare’s giant catalog of games and characters is next?

Some of you who were lucky enough to grab a Comic-Con code a few years back might already have the Huntress Figurehead. Well know you can deck your whole ship out in Carrignton Institute and Datadyne goodness.

So many great options to choose from this month at the Pirate Emporium. From festive themed cosmetics to some new hilarious emotes, you are bound to find something to get you in a jovial mood!