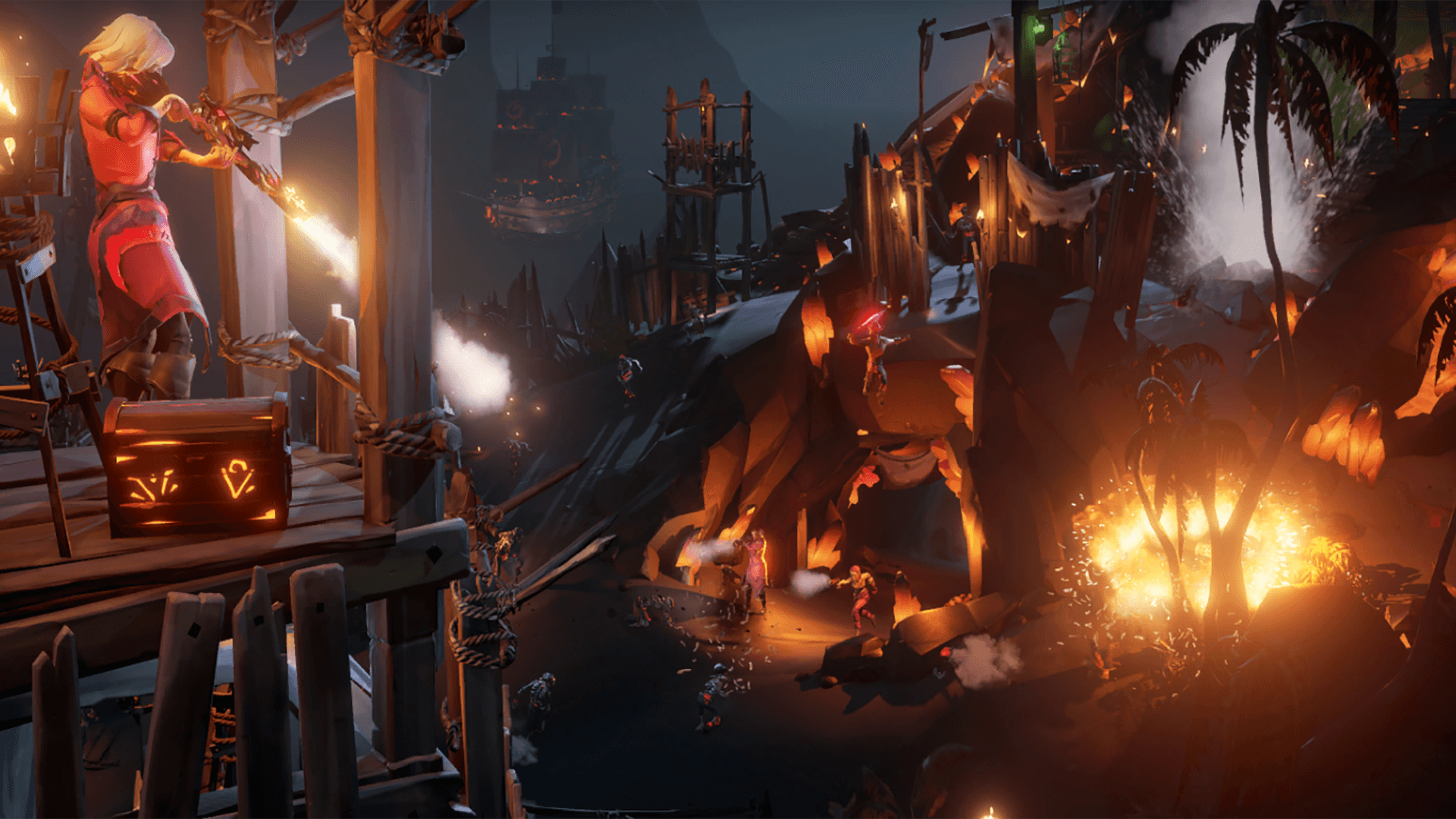 How to get an Ashen Tome of Resurrection? The Ashen Treasures Guide

The Sea of Thieves Crews of Rage update is upon us—bringing ever more ominous and fiery omens into the world. Among these omens are the newest Ashen Tomes:

The Ashen Tomes of Resurrection!

Questions abound! What are these tomes? What do they portend? Where can we find them? To whom are they delivered?

Never ye fear, me hearties! We have your answers…

What are the Ashen Tomes of Resurrection?

There are rumors whispered on the winds. If you’ve sailed the Seabound Soul Tall Tale, you might have heard a few. They tell of evil Ashen Lords—ancient and powerful Skeleton Leaders, who might be trying to return to the Sea of Thieves.

If these Ashen Lords do return, we’ll want to be ready. This is where the tomes come in.

Ashen Tomes are highly coveted and protected manuscripts, as they contain secrets about these malevolent Ashen Lords.

There have been several Ashen Tome sets—each containing five volumes.

To fully understand these Ashen Lords, we’ll need to collect all five volumes to complete each set. The volumes are indicated as roman numerals. For instance, the Ashen Tomes of Resurrection include:

The Tomes of Curses, Power, and Fire have all been in the world for some time now. So, you might already have those volumes.

However, if you don’t already have the Ashen Tomes of Curses, Power, and Fire, there’s no need to worry. You can still find all of those volumes in precisely the same manner as you’ll find the new Ashen Tomes of Resurrection.

Where to find the Ashen Tomes of Resurrection

Ashen Tomes of Resurrection can be found in Ashen Chests.

Arrrgh! They’re locked! Ashen Chests can only be opened with Ashen Keys. So, you must collect an Ashen Key for every Ashen Chest you hope to open.

Ah, but you should know…

Opening an Ashen Chest does not guarantee an Ashen Tome of Resurrection.

The Ashen Chests only have room to fit three items, and those three items could be any of the Ashen Tomes of Curses, Power, Fire, or Resurrection. Aye, now with twenty possible volumes (four sets of five volumes), odds are even lower that you’ll find the tome you seek.

Plus, one or more of those three slots might be taken up by an item that is not a tome at all! You might find a Ritual Skull or a bag of gold.

Ashen Keys have historically been far more difficult to come by, so we’ll address those before moving onto Ashen Chests. However, first, we should probably discuss the protectors of the Ashen Keys and Ashen Chests: the Ashen Key Master and the Ashen Guardian.

First, they have a nice red glow surrounding their skeletal frame. This will help you spot them from afar.

Second, they’re quite a bit stronger than your average Skeleton Captain. So, you might want to bring some food or a friend.

There are many ways to get your leathery pirate hands on a few Ashen Keys. We’ll begin with the most common way: slaying an Ashen Key Master!

How to Find Ashen Key Masters

Ashen Key Masters spawn randomly throughout the Sea of Thieves! As you sail, keep your spyglass at the ready. For each island you pass, scan the shores. You might just see that glowing red aura.

Then again, it might just be a big red bush…

With the exception of the Fort of the Damned—which has fallen under other sorcery—some mysterious magic has turned every fort in the Sea of Thieves into an Ashen Skeleton Fort.

Duke is offering up Raging Bounty Voyages that will take you and your crew to the Devil’s Roar to retrieve a Chest of Rage and a few other ashen treasures.

Beware! At some point while clearing your map of X’s, your shovel will strike the treasure below, and an Ashen Key Master will rise to fight you for it! Don’t just take the chest and run. Cut that Ashen Key Master down to retrieve your key.

For more on this particular method of acquiring your Ashen Key, we’ve got you covered: Crews of Rage Raging Bounty Voyages Guide.

How to Stockpile Ashen Keys

Ashen Chests are much more prevalent than Ashen Keys for reasons you’ll see below. So, it might be nice to know this quick little way of stockpiling all the keys you’re likely to need—plus perhaps a few for bartering purposes.

Raging Bounty Voyages end in different regions, but they all begin in The Devil’s Roar. It is on the very first island you visit for the voyage where you will encounter an Ashen Key Master.

Once you get to The Devil’s Roar, if you do not care about completing the Raging Bounty Voyages at the moment, and would rather stockpile some Ashen Keys…

Other Ways to Find Ashen Keys

If you don’t fancy fighting Ashen Key Masters, there are other ways to find Ashen Keys.

Cast a line and you might just catch an Ashen Key. The odds of this are remarkably low. So, we wouldn’t suggest making this your primary method. However, if things are a bit slow on your ship, why not go fishing?

If your hook has been dangling in the water for a long time with suspiciously few fish nibbling, reel in your line to check. Be sure not to ‘cancel’ your cast. We’ve lost a few good hats like that.

A little tip from the tavern: those who’ve told tales of catching a key claim they did not use bait.

These voyages will lead you to an Ashen Key buried on the closest Outpost. So, you can buy the voyage from Duke, propose the voyage, vote, then dig it up at that very same outpost.

Aye, it makes quick work of finding those Ashen Keys. So, why didn’t we lead with this? Well, it will cost you a rather pretty penny: 99 Doubloons.

As with the Ashen Keys, there are several ways to acquire Ashen Chests. Some of these overlap a bit with the ways of getting Ashen Keys above. Yet, some are uniquely their own.

We begin with finding Ashen Guardians.

How to Find Ashen Guardians

Just like Ashen Key Masters, Ashen Guardians can claw their way up from the ground on any island in the Sea of Thieves! So, keep a weather eye as you sail. Look for that tell tale red glow.

Again, this one overlaps a bit with finding Ashen Key Masters.

On the second to last wave, Ashen Skeleton Forts will bring forth both an Ashen Key Master and and Ashen Guardian. Slay them both, and you’ll get not only an Ashen Chest but an Ashen Key to unlock it.

In addition to the Ashen Chest you can get from the Ashen Guardian, you can also find an Ashen Chest among the loot once you open the Ashen Fort Vault.

Pirates, ye be warned: you will not find an Ashen Chest among the Fort of the Damned loot. You will only find it at the Ashen Forts.

Other Ways to Find Ashen Chests

There’s another crimson cloud you might see on your horizon: Ashen Skeleton Ships.

These ship battles aren’t much different than before—except that they can cannon you with firebombs.

The important difference for our purposes lies in the loot. While Ashen Skeleton Ships do not drop Ashen Keys, they can drop Ashen Chests.

You can actually find Ashen Chests among the loot you earn from other emergent threats at sea. This means Megs, Krakens, and even Skellie Ships you don’t find under a red cloud.

These emergent threats might not be as likely to drop an Ashen Chest as the Ashen Skeleton Ships, but it might be worth a cannon shot.

Similar to the Ashen Key Stash Voyages, you can simply wake up in any tavern and buy an Ashen Chest Stash Voyage from Duke. Then, just take that voyage straight to your boat— still docked by the shipwright—vote on it, and dig up an Ashen Chest right there on the Outpost.

The Ashen Key Stash voyage also differs in another respect—you can buy the voyage for gold instead of doubloons. If you go this route, the Ashen Chest Stash Voyage will cost you 65,000 Gold Coins.

Where do you turn in Ashen Tomes of Resurrection?

You can give all Ashen Tomes to Duke in exchange for doubloons and commendations.

As much as we loved the days when we’d arrive in the Sea of Thieves to find empty Ashen Chests strewn about the tavern, we’d be remiss if we did not remind our fellow pirates: you can also sell Duke your emptied-out Ashen Chests.

If you find yourself with leftover Ashen Chests or Ashen Keys when you’re ready to leave the seas, you can also give Duke any unopened Ashen Chests and unused Ashen Keys.

Pirates, Ye Be Warned:
You can turn in unopened Ashen Chests to Duke, but you will not receive credit for any of the items inside.

You must actually open the Ashen Chest and turn in items individually, if you’d like to receive the item’s worth in reputation, gold, doubloons, or commendations.

As you deliver each volume in the Ashen Tomes of Resurrection, you will unlock the following commendations and earn the following doubloons.

The time to fortify the Sea of Thieves’ defenses is waning. The Ashen Lords could soon descend upon the seas. Will ye be ready?