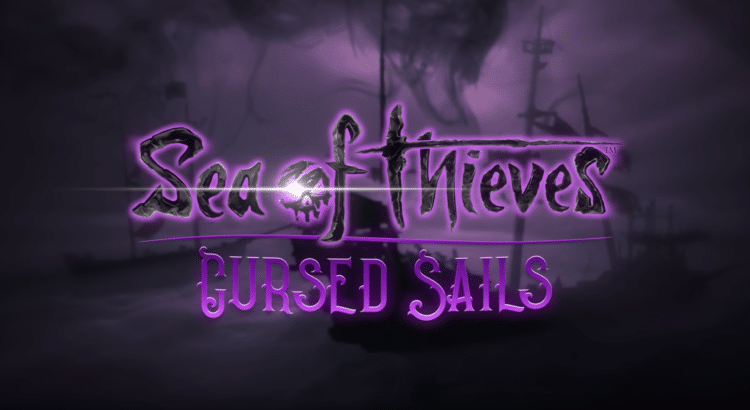 Disclaimer: This article was written for the original Cursed Sails Event—ah, the summer of 2018…

However, you might still find this article quite helpful. The first step of the 2020 Cursed Sails event involves finding Wanda’s Journals.

For Wanda’s Journals,
Skip to Step 5.

If you’re curious what the original Cursed Sails event was like, feel free to peruse at your leisure.

The most exciting update yet for Sea of Thieves, The Cursed Sails, has just been released and with it comes many new pirate festivities for the community to enjoy.

One of the many new features being introduced to the game are ships helmed by skeletons!

Similar to The Hungering Deep, The Cursed Sails provides a story for the players to follow that will shed light onto why these new threats have emerged from the sea.

While Merrick had players hunting for journals to reveal the history of the mighty Megalodon, in The Cursed Sails, Wanda the Weaponsmith has left clues behind about her disappearance that ultimately lead to the new menace roaming the seas.

Stuck trying to gather all the clues? We’ve got you covered. Below you’ll find an image and text-based guide to help you out.

Want more visuals? You might find it helpful to use the interactive map, too!

We’ve added a brand new marker series just for
Cursed Sails!
You can use the web version of the map here.

Of course, if you’re wanting to read along with this guide on your screen, you might want to open up the map in the mobile version.

Go to the shipwright, Sharon, on Golden Sands Outpost and ask her about Wanda. She will tell you to go and check out the Weaponsmith Shop on the outpost. This step will begin the Cursed Sails campaign.

Turn around and walk over to the Weaponsmith’s Shop. Enter the shop, and you will find that Wanda is missing! She has been replaced by her sister, Wonda.

Inside the shop, investigate the note and the pendant.

Next, turn around and look down at the shop’s threshold. There you’ll see footprints. Follow their path from the shop to the beach. At the water’s edge, you can investigate the footprints.

These three actions will complete the first step of the campaign.

After telling Sharon what you found in the shop, she will tell you about Wanda and Salty’s possible whereabouts. Apparently, the two used to meet on Crescent Isle.

Get on your vessel and sail on over to Crescent Isle.

In the cove, you will spot Salty in parrot form on a barrel. Talk to Salty and he will give you directions for where you can find more clues—Wanda’s Journals.

You will find Wanda’s Journals on Mermaid’s Hideaway, Thieves’ Haven, and The Sunken Grove.

Seeing as these are quite large islands—particularly Thieves’ Haven—searching for journals might feel a bit like searching for a needle in a haystack.

Never fear, me hearties! We’ve mapped out the locations. We describe where to find each of the journals below. However, sometimes it helps to not only see it on a map, but also be able to zoom in and out—and orient yourself around—your destination.

So, we’ve included links to each journal’s specific marker on the interactive map below the journal’s image.

You may read these journals in any order you wish. When finished, you’ll find the journals will have led you back to Salty on Crescent Isle.

Head on over to the big pond in the middle of the island. On the southeast side of that pond, you’ll see Five Paces Frank standing amidst a humble camp with a few fireside benches.

Wanda’s Journal is on one such bench.

See the journal’s location on your map:
Wanda’s Journal on Mermaid’s Hideaway

Thieves’ Haven is a large multi-level island hollowed by twisting caves and corridors. Fortunately, the journal is actually well within reach just upon sailing up to the island’s shores.

If you look at a map of Thieves’ Haven, you’ll notice a patch of golden sand on the northeast side of the island.

This might be familiar from times when you’ve come here to find riddle landmarks and rock paintings for: “The Survivor’s Camp,” “The Last Crewmate,” or the “Thrice Marked Crabs.”

See the journal’s location on your map:
Wanda’s Journal on Thieves’ Haven

Wanda’s Journal on The Sunken Grove

The Sunken Grove seems to derive its name from the island’s sunken center. Head toward that center, and follow the winding path down.

Near the lowest point, you’ll notice a cave sheltering a small campsite. There you’ll find Wanda’s Journal on a camp bench.

See the journal’s location on your map:
Wanda’s Journal on The Sunken Grove

Upon returning and talking to Salty on Crescent Isle, he will tell you about Wanda’s secret hideout on Wanderer’s Refuge. You know where to go next!

Once on Wanderer’s Refuge, head over to the big tunnel in the middle of the island. Once there you will find a small opening on the South West side of it. Walk on in and discover Wanda’s Alchemy Lab.

In Wanda’s Lab, you must investigate five objects.

First, you will need to read the Evil Pirate Code. You will find it tacked to a table right in the middle of the lab.

Looking up from the table, you’ll see another piece of paper tacked onto the back wall: a scroll.

Off to your right, you’ll notice a wooden platform, serving as a makeshift bedroom. On the front corner of this platform you will find another item: a cannon base.

You’ll also find an item worth inspecting on the bed: an apron.

Finally, you’ll want to head over to the back left of the lab. There you’ll find some tools worth a look.

After investigating these five items, you will be instructed to return to Sharon on Golden Sands Outpost.

Go to the shipwright, Sharon, on Golden Sands Outpost and tell her everything you’ve discovered about Wanda.

After telling Wanda’s story, Sharon will give you a new set of sails—and information on where you can collect two additional sets.

You have now completed Wanda’s story and discovered the origin of the skeleton ships. This small chunk of the Cursed Sails is just the beginning of your time with the update. There are skeleton ships to conquer and seas to reclaim!

Each region in the Sea of Thieves is now under attack by skeleton pirate crews!

On every outpost, you will find an ominous sight: a dagger-stabbed parchment announcing the skeletons’ threats. Aye, within you’ll find the details of when and where these skeletons plan to attack.

To conquer the skeleton crews, you must sail to the region threatened on the days in question. The locations and days are as follows:

The Battle for The Shores of Plenty

The battles begin on the 1st, with fighting continuing through the 10th. To join in the fight, you’ll need to sail North West of Smuggler’s Bay.

The Great War of The Ancient Isles

The war rages on in the Ancient Isles from the 11th through the 20th. You’ll find the troubled waters West of Sharkbait Cove.

The Final Stand of The Wilds

From the 21st to the 30th, you and your fellow pirates will make your final stand in The Wilds. Head East of Marauder’s Arch to find the action!

Note:
These are in-game days.

Once you are at the right place at the right time, waves of skeleton ships will rise out of the water, attacking any nearby ships. Defeat multiple waves of ships and you will spawn a captain wave, much the same as you would when fighting on skeleton forts.

Be sure to stock up on supplies and try to form an alliance with any nearby ships. You won’t want to be fighting these Skeleton Ships and your fellow pirates at once!

Between finding out what that suspicious Wanda has been up to and hunting down Skeleton Ships throughout the Sea of Thieves, you will be a busy pirate for the next three weeks!

Feel free to ask any questions below. Good luck out there, pirates!