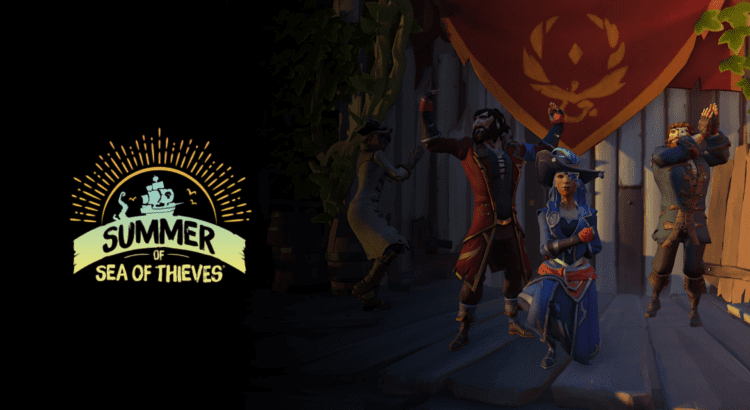 The Summer of Sea of Thieves Time-Limited Event is happening now and there are a considerable amount of daring goals to complete while in Arena Mode.

Some goals need to be completed in the Tavern in-between contests while others must be performed during an Arena contest.

Below you’ll find every Summer of Sea of Thieves goal that can be completed in Arena Mode. They are categorized by location and type of goal making your time on the seas more efficient!

You can always check your progress on the official Summer Event page here. For those looking on some guidance on their Adventure goals, you can head over to our Adventure guide here!

DeMarco can be found inside the Glorious Sea Dog Tavern in-between rounds of Arena Matches. You’ll find him on the bottom floor of the Tavern next to the bar. Talk to him to complete this goal.

Lesedi can also be found on the bottom floor of the Tavern just across from DeMarco. Talk to her and you’ll complete this goal.

Dimitri is near the ship wheel found in the Glorious Sea Dog Tavern. You will spot him as soon as you enter the Tavern. Talk to him to complete this goal.

In The Arena, raise the Glorious Sea Dog Tankard together with 3 other pirates in the hot tub

In the Arena tavern, get at least one member of each crew into the hot tub at the same time

For this one you’ll have to get at least one member of every crew into the hot tub. Once you have accounted for each team in the hot tub the goal will be complete.

Use the Make Friends emote to befriend another pirate

Be sure to have your Make Friends emote equipped before finding another pirate to do this with. You can always adjust your emotes in the Vanity Chest. While this is possible to do in an Arena contest it might be wiser to find a pirate in the Tavern in-between rounds.

Play a shanty alongside a member of another crew

This will be an easy goal to complete in the Tavern in-between contests. Find another crew and pull out your instrument. Only one member from the other crew needs to play any instrument at the same time that you play yours. Start playing and hope they join in!

Drink so much grog that you’re sick

You’ll want to find a keg to refill your grog at to complete this goal. Drinking just one cup of grog will not be enough to get you sick. You can find one on the bottom floor of the Tavern in-between contests.

You’ll want to consume three full cups of grog back-to-back. This will be enough grog to cause your pirate to get sick.

Play a shanty on your ship along with a full crew of 4 pirates… in The Arena!

To complete this goal you’ll want to play Galleon Arena. This way you’ll have a full crew of four. As soon as the match starts or when you have a moment of downtime, have the whole crew pull out their instruments. As soon as everyone plays at the same time the goal will complete.

In The Arena, defeat a pirate who has boarded your ship

There are lots of sneaky pirates in Arena! You are sure to come across a boarder or two. Make sure you have your weapon of choice equipped and deal with any scoundrel who boards you ship immediately.

A good strategy would be to watch your ladders and blunderbuss anyone who climbs up!

During an Arena contest, board an enemy ship and drop their anchor

You’ll have to board another crew’s ship and drop their anchor for this one! It might be easier to try this when the target ship is in the middle of a cannon fight. They will be less likely to be guarding their ladders waiting any potential borders.

Once you are on the ship you are trying to anchor, drop their anchor and the goal will be complete.

In The Arena, kill a pirate with your blunderbuss

Equip a blunderbuss from the Weapon Box on your ship and wait for a boarder or board another boat. You are also likely to find another pirate near the chest. Kill any pirate on another crew with the blunderbuss and the goal will be complete.

For this goal you’ll be doing a lot of boarding. Choose the weapon you feel most comfortable with and get on as many ships as you can. From there do your best to kill any pirates on other crews. Once you have killed your 20th foe you will complete this goal.

You can of course kill any boarders or pirates you come across while fighting over the chest on land, but you are more likely to meet more pirates on their own ship.

Complete a contest in The Arena

Start up a Sloop or Galleon Arena contest and play for the whole 15 minutes. After the contest ends this goal will be complete whether you win or lose!

Cash in a Sea Dog Chest in The Arena

There is only one Sea Dog Chest active at a time during an Arena contest. It can easily be spotted by the large purple beacon above it.

Once you have one in hand head over to the turn in point and turn it in. The goal will be completed on cash in.

Cash in a Sea Dog Chest in The Arena while drunk

This one can be tricky. To do it safely you’ll need a minute or so of alone time which is hard to come by in an Arena Contest. Once you have a chest head on over to the turn in point. As you get close start to chug down your grog. Within several seconds you’ll notice the effects of the grog and you are ready to turn it in.

As long as your screen is blurry and your pirate has trouble walking in a straight line while you turn in the chest, you will complete this goal.

You can spot the Sea Dog Chest easily from the large purple beacon that leads directly to it in the sand. As soon as the contest starts sail on over to the island where the chest is and dig it up.

You’ll want to get the chest back on your boat and to the turn in point as fast as you can. If you are able to turn it in during the first 5 minutes of the contest you will complete this goal.

Hand in a stolen Sea Dog Chest during an Arena contest

The Sea Dog Chest is easy to spot with its large purple beacon following it as it moves. Track it down and turn it in yourself to complete this goal.

You don’t have to do this all in one contest. You can dig up a Sea Dog Chest in separate contests and it will count towards this goal. Once you have dug up a total of three chests during the event, you will complete this goal.

You are bound to receive some holes in your ship if you engage in any boat during an Arena content. Whether you are in a sloop or galleon, start a fight and as soon as you get a hole repair it. After repairing three holes you’ll complete this goal.

Fire a cannon 50 times in The Arena

This is also cumulative over many contests. Grab some cannonballs from your ship and load up your ship’s cannon. Fire away! After shooting a total of 50 cannonballs this goal will be complete.

To perform a handbrake turn in Sea of Thieves you must be sailing your ship at a decent speed. When you have plenty of room to pull off this maneuver you will want to turn your ship’s steering wheel all the way in either direction. Once your steering wheel is all the way left or right, drop your anchor!

Dropping your anchor while your ship is moving and the wheel is turned all the way in one direction will result in a handbrake turn. Once your anchor is dropped and your ship turns you will complete this goal.

Finish among the top 3 crews in an Arena contest, 3 times

You get silver in Arena for digging up chests, delivering chests, landing cannon shots and killing enemy pirates. Make sure you accrue enough silver to finish in the top three several times and this goal will be yours!

Finish among the top 3 crews in 10 Arena contests

In The Arena, win a contest as a Pirate Legend

In The Arena, fire yourself from a cannon and land on the deck of an enemy ship

This can be a tricky task! One of the easier methods will require you to anchor the ship you want to launch to first. A stationary target will be much simpler to land on than one in motion.

Once you have the ship you are looking to land on anchored, getting your ship’s broadside facing the front of the other ship will allow you to use the masts and helm as a backboard to stop your trajectory.

Once you have your cannons facing the front of their ship, point the cannon you will be firing out of at one of the masts or towards the helm and hope that either stops your momentum. You will hopefully bounce off the mast or helm and land on the ship completing the goal!