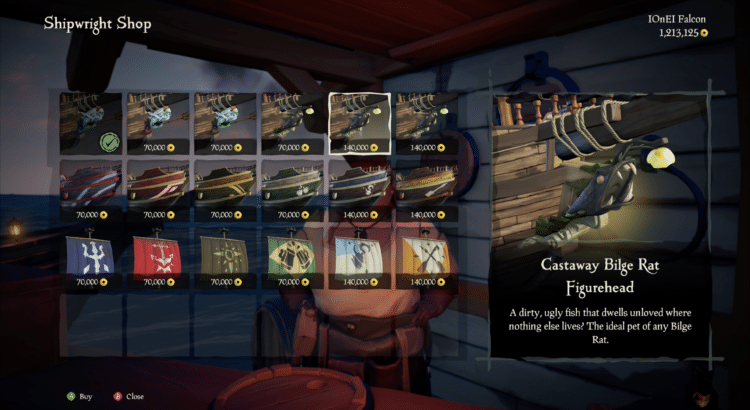 Similar to IRL stores, you might say SoT outpost shops kicked off their “summer line” on May 1st. Of course, in SoT cosmetics include more than fashion (i.e. weapons—personally a fan of blue and leather, I eagerly bought the entire set of Castaway Bilge Rat weapons).

Thankfully, SoT is also quite dissimilar to IRL stores because Rare does not treat this as a “take it or leave it” stagnant “line.” Instead, not only is Rare open to feedback, Rare is actually acting on that feedback.

More specifically, there was feedback that many items looked a bit too similar—SoT pirates want a bit more variety in their flare. Rare listened. During the last weekly update, Joe Neate mentioned that the “offending items” would be removed. Following that announcement, Cameron Thomas posted further explanation on what players should expect from these removals on the official forums here.

Mark your calendars for:
May 22nd.
On May 22nd, players will see the following cosmetics removed…
Shipwright cosmetics:
Weaponsmith cosmetics:

Once they are removed on May 22nd, they will no longer be available for purchase. However—if you have already purchased one of these items—you will get to keep the items and continue to use them.

Why mark your calendars?

For the collectors among us, this essentially makes these items “limited edition.” This may mean that you want to buy these original items before they are no longer available.

For those interested in new cosmetics, Rare will be introducing new, more varied cosmetics to the game within the coming few weeks. So—particularly after May 22nd—you might want to take a gander at those outpost shops.

This way, if you’re ever made to “walk the plank,” you can walk it like a runway. New word added to the pirate dictionary: Werk!