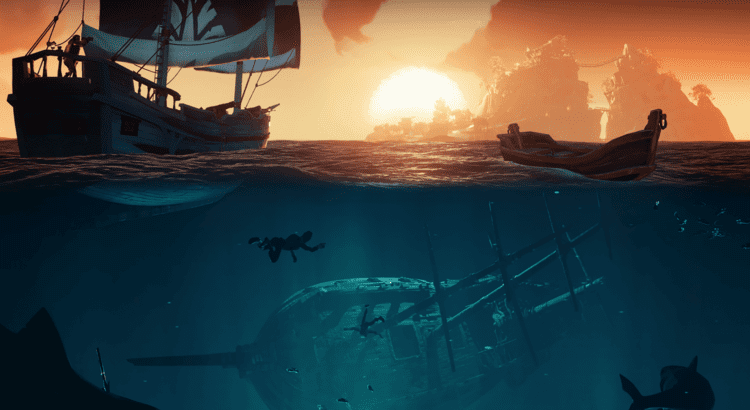 The Merchant Alliance has recently caught a few tough breaks. Some of their shipments of cargo have not reached their destinations, and the vessels carrying the shipments are lost at sea.

Due to these unfortunate events, the Merchant Alliance is now asking for help! They will handsomely reward any pirate who can track down their lost ships and recover the manifests aboard them.

The Clues will ultimately lead to the lost vessel’s location, now shipwrecked in the ocean, and its manifest. Turning in the recovered Merchant’s Manifest to Merchant Alliance will yield a notable pile of gold!

You can purchase a Lost Shipments voyage from Larinna, located outside any tavern in the Sea of Thieves.

You can also purchase the voyage from the Merchant Alliance, but you’ll need to be least reputation level of 25 with the Trading Company to do so.

If you are purchasing the voyage from the Merchant Alliance, the number of clues you’ll discover and loot you will retrieve will vary depending on your reputation level.

You can expect to find more clues and treasure the higher your Merchant Alliance reputation is. It is possible to find as many as four clues before finally finding the lost shipwreck.

Before leaving the Outpost, it wouldn’t hurt to throw up a Merchant Alliance Emissary Flag. You will be picking up dozens of Merchant Alliance crates along the way that will raise your Emissary Grade and make the payout even larger when you eventually turn in your loot.

Vote and start the voyage

Upon voting on and starting the voyage, you will receive one quest. This quest will be a Trade Route Map for the missing delivery. The Trade Route will most likely be in the region you started the voyage.

Once you know where your origin island is, sail on over to begin your investigation. If you start the voyage at an Outpost, you could get lucky and already be at the origin island. Once in position at the origin island, face your ship in the direction that the Trade Route travels towards the destination island.

From the origin island, you will want to follow the ship’s plotted course towards its destination while keeping an eye on the horizon for Clues about the lost ship’s travels.

It is possible to discover the shipwreck without finding the Clues scattered along the path. Though, you will miss out on tons of Merchant Alliance treasure and the Captain’s Key. The final Clue will also help you triangulate the location of the shipwreck.

Time to find those clues!

How to find the lost Shipwreck

The Clues you gather along the voyage will be log entries from the lost crew’s journal. You will be following along the crew’s journey as they log their travels.

The number of Clues in a voyage is variable based on the Merchant Alliance’s voyage rank. As you discover Clues, your Trade Route Map will track them by showing a marker on their found location.

How to find your first Clue

The first Clue to discover will always be found inside a Merchant Barrel floating in the sea. You will find the Merchant Barrel along with other floating debris, Resource Barrels and Merchant Alliance crates in the water underneath a large circle of seagulls.

You should be able to see the flock of seagulls from the origin island as you scan the horizon with your spyglass if you are facing the correct direction.

Once you are at the Clue site, jump in the water and inspect the debris. Look for a Resource Barrel with blue stripes on it. This new kind of Resource Barrel is the Merchant Barrel you are looking for. Inside it will be your first Clue which is a Curious Note.

You’ll also want to keep an eye out for that Captain’s Key floating in the water at the Clue site. It will glint blue from a distance and not yellow like other treasure. The Captain’s Key can spawn at any of the Clue sites, even the first one! If you don’t find it at the first Clue site, keep it in mind as you search the following ones.

We found using our spyglass to locate the seagulls to be of great help! We found it especially helpful for the Sea Clues later one where the flock of seagulls is much smaller!

How to find your next Clue

With your first Clue in hand, read it to discover the next location you should sail to. There are a handful of different types of Clues you can encounter during this voyage.

If the Clue is a Log Entry that mentions an island, sail to that island. This Clue is an Island Clue.

If the Clue is a Log Entry that mentions map coordinates, sail to those coordinates. This Clue is a Sea Clue.

If the Clue is a Log Entry that mentions a pirate’s name and an island, sail to that island and find the NPC who resides there. This Clue is an Island Resident Clue.

If the Clue is a map of a circled island, sail on over to that island. This Clue is a Circle Map Clue.

If the Clue mentions neither an island nor coordinates, that means there are no more clues to be found, and you should sail towards the destination island until you run into the shipwreck. You have discovered the Final Clue.

If your Clue mentions an island by name, sail over to that island to look for your next Clue.

Once on the island, you will want to walk along the island’s beaches looking for a Clue in a Bottle. The Clue in a Bottle will glint a light blue from a distance instead of the usual yellow. You will also find The Clue in the Bottle surrounded by Merchant Alliance crates and wooden debris making it easier to spot on the beach.

You shouldn’t need to head inland to find the Clue in the Bottle.

Once you find the Clue in the Bottle, pick it up, and you’ll be on your next step. You will also be ambushed by a group of skeletons when picking up the Clue so prepare for battle!

If your Clue mentions coordinates, sail on over to those coordinates to look for your next Clue.

The Clue will be floating in the sea underneath a small flock of seagulls and next to Merchant Alliance loot and wooden debris. It will be somewhere inside the coordinates given in the Clue.

Again, use that spyglass! You will be surprised how much it helps track down those seagulls flying above your next Clue. If you are struggling to find the small flock of seagulls and the floating debris in the coordinates, go up to your crow’s nest and scan the horizon with your spyglass.

If your Clue mentions a pirate’s name and the island they are residing on, sail to the island mentioned. Once on the island, you will want to track down the NPC living there. Sometimes the island can be a Seapost making it easy to find the NPC.

Once you find the NPC, talk to them. Choose the first dialogue option available to acquire the next Clue from them. They will give you the Clue after you are done speaking to them.

If your Clue is a map of an island with part of it circled, sail to the island depicted on the map. Once on the island, you will want to head over to the circled area.

Comb the beaches of the circled part of the island looking for a blue Clue in a Bottle. Once you find it, pick up the Clue in the Bottle to continue on to your next step.

The Final Clue will not mention an island or coordinates. Instead, the log entry will have texting containing phrases such as “near the end” or “no more distractions.” From the location you found the Final Clue, you will want to sail towards the destination island.

Along the path, you will find the shipwreck. The shipwreck will have a small flock of seagulls above it, not the usual large amount of seagulls you might expect from emergent shipwrecks.

You’ll also know you are at the right shipwreck because you’ll get a new music queue for the voyage when you dive down.

How to find the Captain’s Key

The Captain’s Key will have a blue glint when seen from a distance similar to the Clues in a Bottle. The blue glint will help you spot the key amongst the floating debris or on the beach at the Clue site.

If the Captain’s Key is not in the floating debris with the first Clue, scour each Clue site for it. The Captain’s Key will be near the Clue in a Bottle or NPC, but it can be hidden from plain sight. We once found a Captain’s Key underneath the water on the beach of an Island Clue.

It also sometimes helps to dive beneath the water and look up at the floating debris for the Captain’s Key’s blue glint.

How much is the Captain’s Key worth?

How to find the Merchant’s Manifest

Once you spot the small flock of seagulls above the shipwreck, dive down to it. You will find Merchant’s Manifest in the hands of an ill-fated captain somewhere on the shipwreck.

The skeleton holding the Merchant’s Manifest can be anywhere on the shipwreck. Be sure to check behind the Captain’s Cabin, in the crow’s nest, on the deck, and in the shipwreck’s hull.

If you have the Captain’s Key, don’t forget to use it on the shipwreck’s Captain’s Cabin and grab the loot stored within it.

How much is the Merchant’s Manifest worth?

Depending on the voyage rank, you can sell the Merchant’s Manifest for 1600 to 4000 gold.

How to get the Merchant Pathfinder Sail

How to get the Golden Gatherer Merchant Sail

To unlock the Golden Gatherer Merchant Sail, you will need to open 50 Captain’s Cabins with the Captain’s Key. While completing the Lost Shipments voyage and turning in the Merchant’s Manifest is one thing, it is another to find the Captain’s Key and use it on the shipwreck.