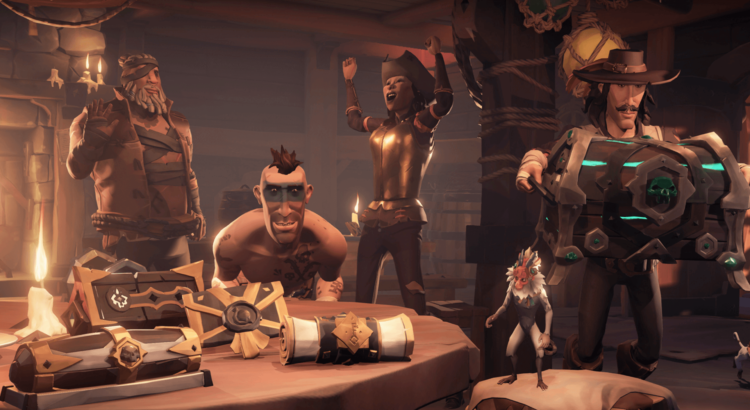 Duke is back! Yes, your favorite Bilge Rat has finally resumed his role at your local Outpost. With Duke’s return comes Stitcher Jim’s disappearance. We aren’t quite sure where Jim ran off to but do we really care? Duke is back!

We are elated to see our good friend back at his post! Yet, we are a little worried to see that he is pretty banged up. Apparently, Duke had a little run in at the Heart of Fire. It was all worth it for us pirates though as Duke has retrieved a stash of Gilded Voyages!

These Gilded Voyages will allow you to earn a range of high valued loot as well as reputation with your desired Trading Company.

You can only claim one Gilded Voyage from Duke though so choose wisely!

If you are looking to earn some high reputation with the Gold Hoarders, the Gilded Hoard voyage is what you seek. The Captain’s Chests you will be digging up will definitely please the Gold Hoarders.

If you are looking to make big gains with the Merchant Alliance, you best be collecting the Gilded Merchant voyage from Duke. This Gilded Voyage will have you digging up dozens of Silk Crates!

Trying to impress the Order of Souls and jump the ranks within their Trading company? Grab the Gilded Duel voyage that Duke is offering. You will be hunting down some of the deadliest captains and retrieving their Villainous Skulls!

And of course, if you need a bump in your Athena’s reputation, the Gilded Voyage of Legends will be right up your alley.

Claim your voyage and vote on it. This is your one chance to reap the rewards of this Gilded Voyage.

You can’t leave and come back to continue it once you have voted on it. You also can’t do it again so make sure you are ready for the adventure that awaits you!

Each of the Gilded Voyages available will consist of eight quests! By the end of the voyage you will have collected dozens of Captain’s Chests, Crates of Silk or Villainous Skulls!

You can cash in your rewards with a Trading Company for gold and reputation or deliver to The Reaper’s Hideout for double gold!

For those pirates on the Sea of Thieves who have reached the top ranks with every Trading Company, you might want to turn in the loot gained from your Gilded Voyage to the Masked Stranger at The Reaper’s Hideout.

The Masked Stranger is offering double the reward of what the Trading Companies would usually pay!

As the Masked Stranger does not belong to any Trading Company, you won’t earn any reputation by turning in loot to her. You will only get double gold.

There is a catch though! The only loot that the Masked Stranger is trading double gold for are Captain Chests, Villainous Skulls, Crates of Exotic Silks, Chests of Legends and of course Reaper’s Chests and Reaper’s Bounties.

Reaper’s Tribute of Legends – Deliver 1 Chest of Legends to The Reaper’s Hideout. (25 doubloons)

Thanks to Duke, you pirates should have a very profitable month! Have fun reaping the rewards of these high valued voyages.

If you decide to deal with the Masked Stranger, be sure to be extra cautious as you approach The Reaper’s Hideout! There is sure to be a sneaky pirate hiding there waiting to take the riches for themself!