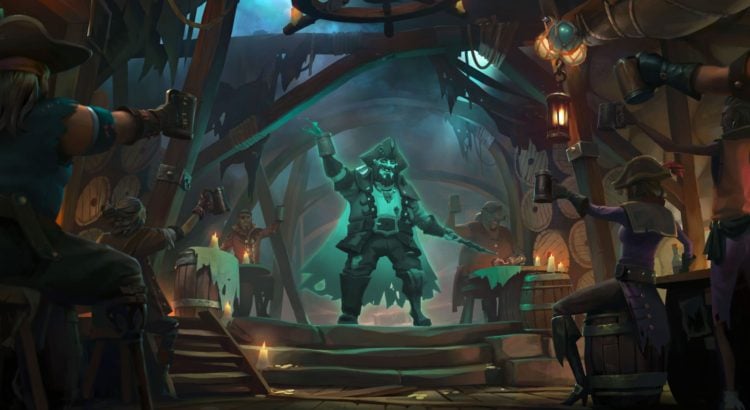 Many pirates are steadily approaching level 50 in all three trading companies. Once they do, they’ll be considered “Pirate Legends.” They’ll then have access to Athena’s hideout, Athena voyages, Legendary cosmetics, and—as they complete Athena’s voyages—some pretty sick Athena cosmetics!

Currently, very few hold that legendary status. As of this publishing, only 0.08 percent of SoT players are pirate legends. So, we thought we’d sail around with a pirate legend and glean a bit of insight.

Our interviewee goes by the gamer tag skeemEra. You may notice his “legendary” belt in the in-game photo. You may also notice the title “Brave Vanguard” below his gamer tag, indicating his participation in the Technical Alpha. 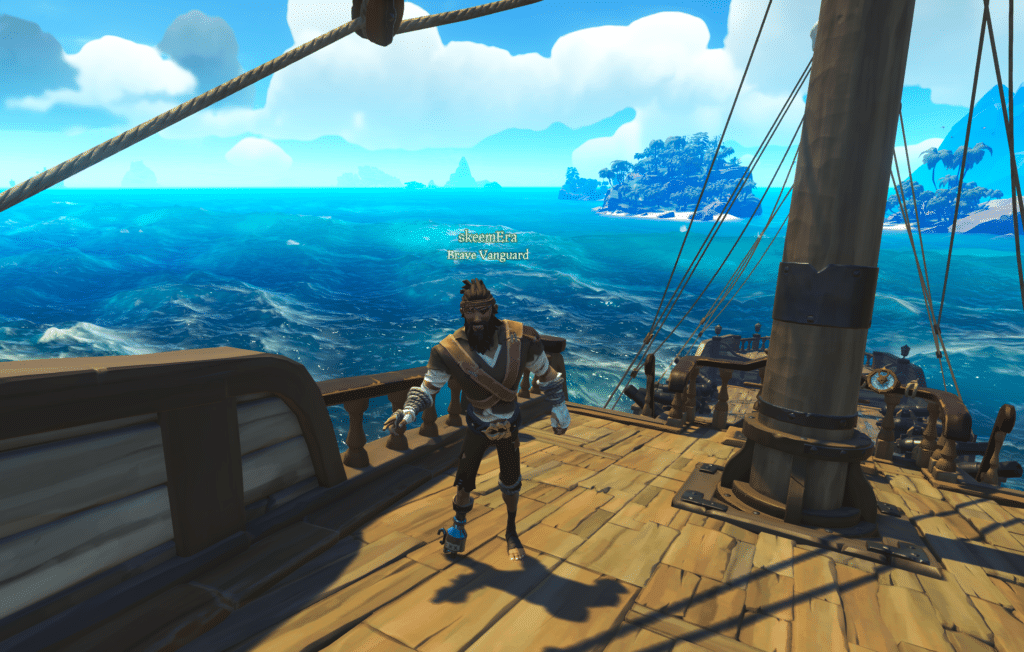 Since we’re interviewing someone who has actually leveled up all three trading companies, we decided to get straight to the point with a question about leveling up.

RT: Which trading company was the most difficult to level up?

skeemEra: Order of Souls because in order to do Order of Souls at the higher levels you’re going to be going to islands with four skulls—or three or more skulls—preferably four to get the most bang for your buck. And, you’re going to need a crew that is knowledgable and experienced. So, it makes it more difficult to do than Gold Hoarders which is relatively a lot easier because you’re just going to a spot on the map, pulling up some treasure, and killing off some normie skellies. So, the Order of Souls is more experience based and in my opinion probably the hardest one because, I mean, I don’t know what Merchant is like now because I did the cheese. 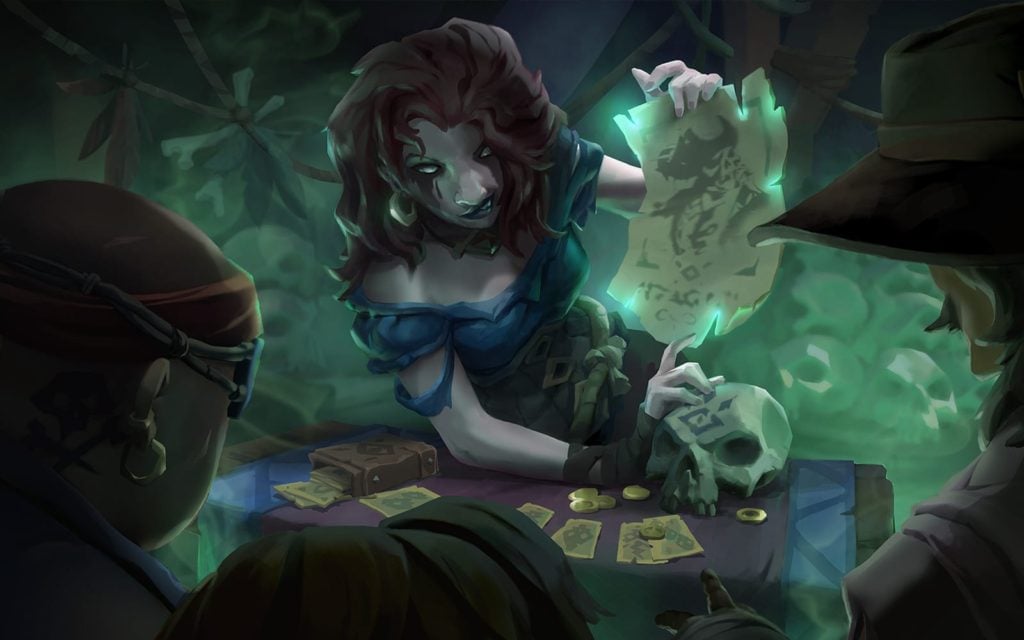 RT: Which is your favorite type of voyage and why?

skeemEra: To be honest, I kinda like—I feel like I should like Order of Souls the most because it’s more FPS based—but I think I like the Gold Hoarders the most because you can kinda just chill when you’re doing it. There’s no stress. You don’t have to worry about if your teammates are good or not, you can just go out and listen to music, and hang out with your friends, and chill—and do PVP on the side. 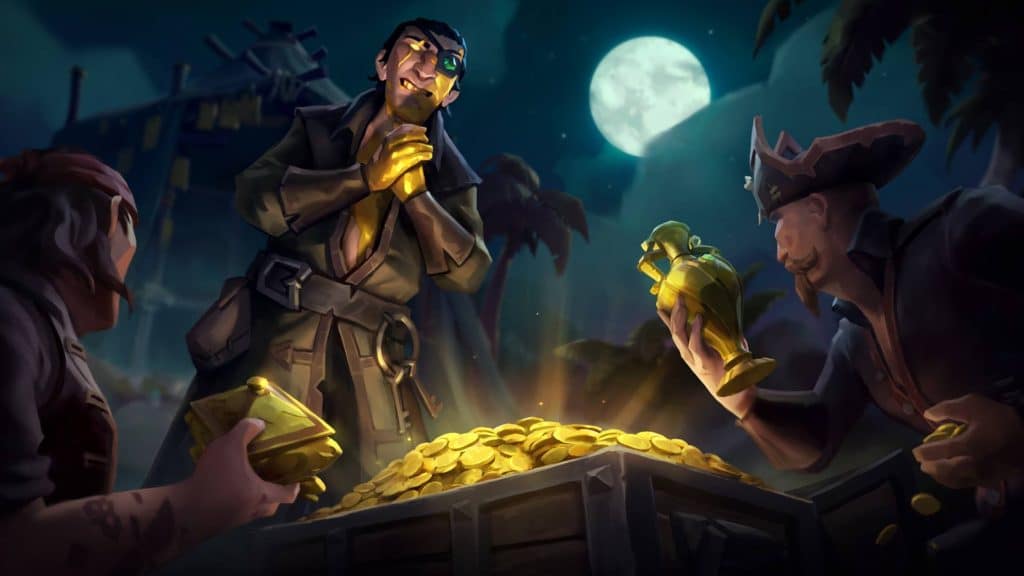 RT: Would you say you do a lot of PVP, or do you mostly stick to your voyages?

skeemEra: I pretty much PVP any chance I get, but I typically am always on a voyage. So, I’m voyaging and then if there’s an opportunity for PVP I’ll take it. And, especially if there’s a skull fort or something like that, I’ll make sure I try and grab that. Or, if I’m in a voyage and I know I can finish up, I’ll let someone else do some waves on the skull fort for me, and then I’ll finish up my voyage and head over there and finish up the skull fort.

RT: How do you mean “someone else”? Someone you’re playing with, or you’ll let another crew that you know is there work on the waves?

skeemEra: Yeah, yeah. I’ll just let the skull fort sit. There’s a time limit to it. If it’s a good crew, they might be able to finish it in 10-15 minutes. If not, it could take up to half an hour or so. So, depending on the players I’ve fought on the server previously—or how I feel the vibe on the server is going—I might let other players on the server go into the skull fort and start clearing waves for me, while I finish up a voyage. Then, I’ll head over there and clean up the skull fort with less waves for me to do myself, or for my crew. 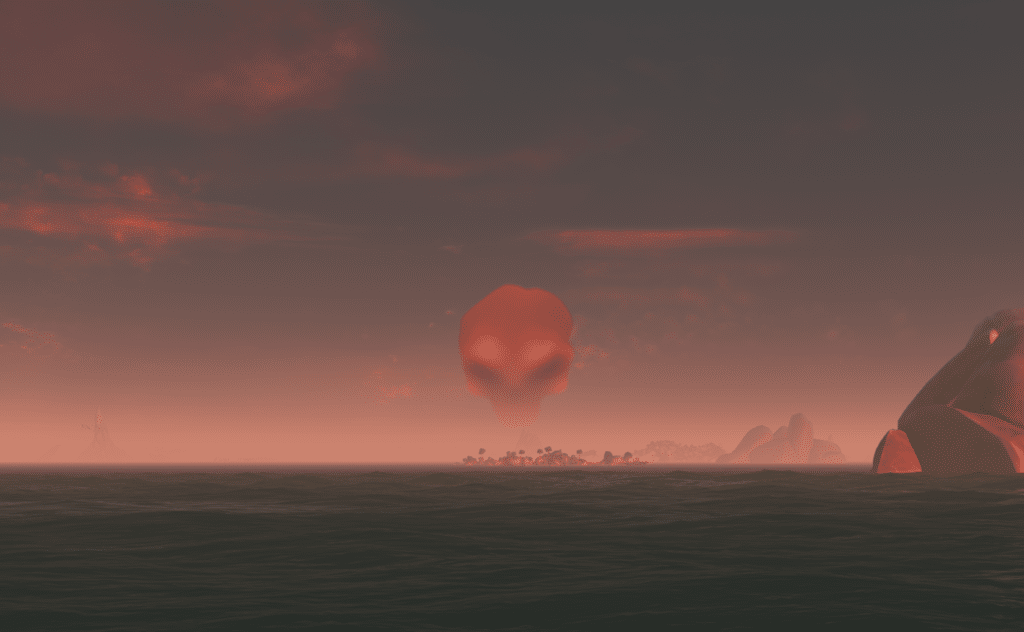 RT: In SoT, players can carry two weapons at a time. What is your weapon set of choice?

skeemEra: Weapon of choice has to be blunderbuss just because it’s the one weapon I’ve used the whole time I’ve played—ever since the beta. I used to like the sniper during the beta as my secondary, and then it got nerfed. So, I switched over to the Flintlock. But, now since the sniper got buffed again, I’m planning on trying it out again. So, I don’t really know what my secondary is, but Blunderbuss has been my tried and true throughout the whole time playing.

RT: What is your favorite island and why?

skeemEra: At first it was Mermaid’s Hideaway because I hadn’t really seen all the islands yet. And, Mermaid’s has a lot of cool hidden stuff in there—like the ladder that goes down into the coral reef and stuff—which I thought was really cool and I didn’t see that on any other island before. So, I was kind of entranced by that. But, learning the map a little bit better, I came across Thieves’ Haven. And, you just get that pirate vibe there that no other island replicates. So, that’s going to be my favorite.

skeemEra: No, I haven’t. I haven’t explored any of that. I kind of just spent most of my time grinding to get to pirate legend.

RT: What do you think of the Pirate Legend Hideout?

skeemEra: I think the pirate legend hideout looks exactly like straight out of The Goonies. So, every time I come in here I feel like Sloth is right behind me. And, I really want to sail that boat straight out through the waterfall, and take all of it’s loot, and I don’t know. Yeah, it’s cool. It reminds me of The Goonies a lot and gives me throwbacks to the movie.

RT: Did you buy any legendary cosmetics?

skeemEra: Yes. By the time I got to pirate legend, I had nearly two million dollars, and I didn’t have anything to spend on. So, yeah. I bought all the legendary ship customizations, and I’m working on buying up the Athena stuff now. 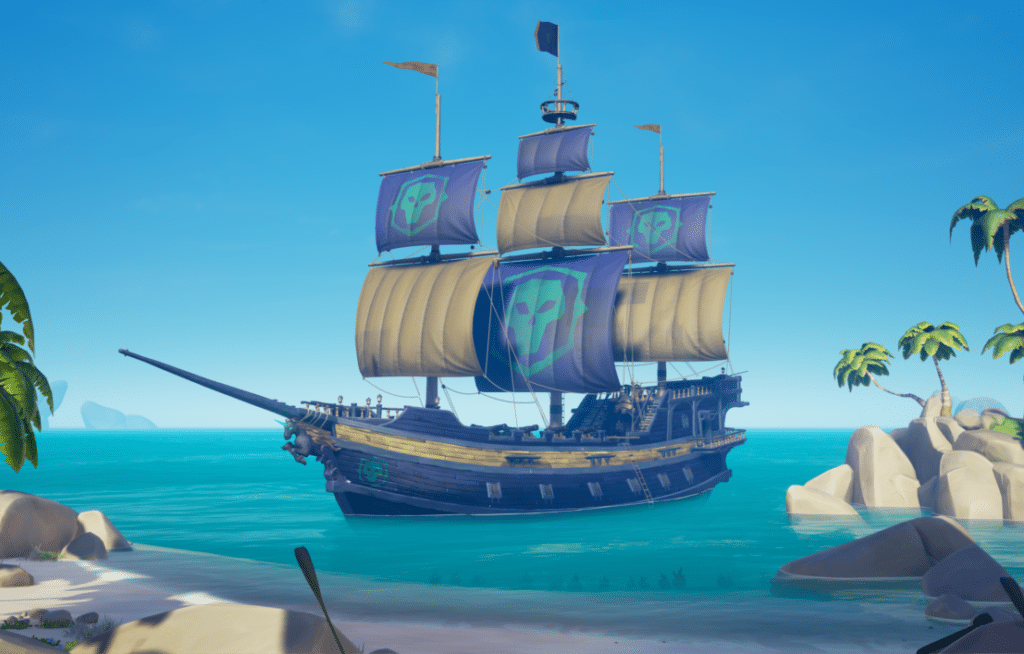 RT: Do you sail with any indicia that you’re a pirate legend, or do you keep it on the DL?

skeemEra: It depends. If I’m in a hostile server, where I’m Athena’s questing or I think I’m going to be carrying a lot of loot, I try not to put the ship customizations on. But, if I’m cruising with my friends, or if my crew hasn’t seen the ship customizations, I’ll throw ‘em on. Or, if I’m PVP’ing I’ll throw ‘em on to get people a little bit scared—to let them know there’s some experienced people on the ship.

RT: Have you checked out the content plans? Is there anything you’re particularly excited about?

skeemEra: I think Hungering Deep is the next biggest thing that’s coming out, and there’s so much that hasn’t been said about it. I think a big concern with the player base is the lack of content. So, the fact that they’re going to launching some more soon is a good sign. Even though we don’t really know exactly what’s coming, I think Rare has been really open to listening to the community and actually putting that feedback into the game. So, I feel like Rare knows that the game is lacking content and that they are going to do everything they can to make sure that they add more.

skeemEra: As far as stuff that I know is coming, I think the thing I’m most excited about is private lobbies for Galleons and Sloops. So, you don’t have random people on your crew that you can’t kick out. Or, if one of your buddies gets kicked from your crew, and you get a random who just joins and doesn’t want to leave, there’s nothing you can do currently. So, the private lobby will fix that. I think that’s the biggest thing that I know is coming that I’m looking forward to.

RT: Do you sail primarily with other pirate legends?

skeemEra: I sail with people that I know are competent. So, if you’re not a pirate legend, but I know you’re competent, I have no problem sailing with you. However, most pirate legends that I’ve encountered are competent. So, I have an easier time—if I see a crew looking for pirate legends—I have an easier time knowing that that crew is going to be legit. Whereas if I see crews with lower rep asking for crews, I might question whether they have the experience and know how of the game to play at a level I’m accustomed to. But, I have played with lower rep players, and they’ve shown the competence of higher rep players, and I have no problem playing with them. It’s just easier to know if they’re competent if they’re a pirate legend.

RT: How do you find other crew members?

skeemEra: Discord. The official discord or the Reddit discord.

skeemEra: Well, I don’t have to find those guys. They’re already found. Yeah, I mean, if my real-life friends aren’t on, and I need to find fill-ins for other crews, then I use discord—official or Reddit. 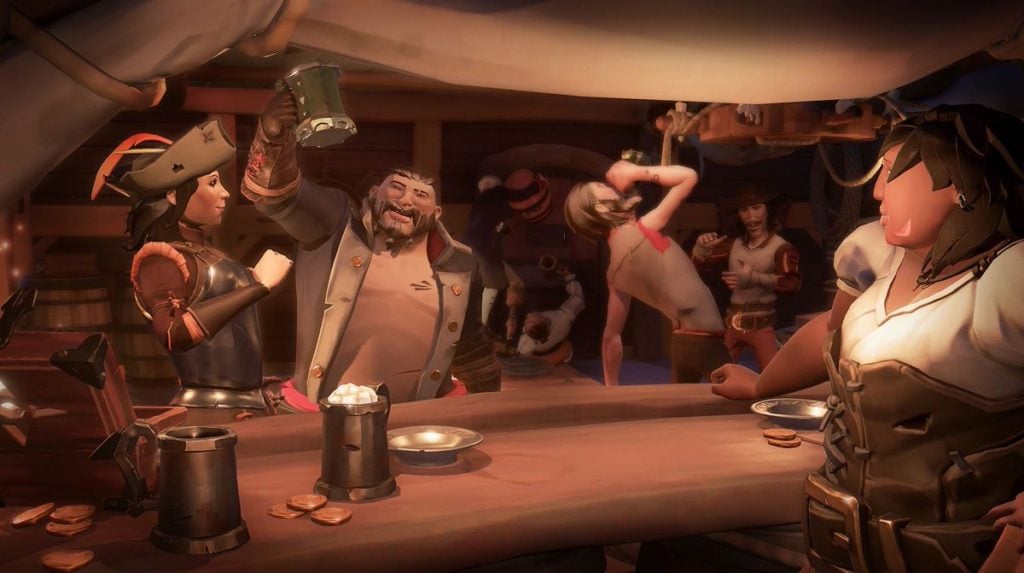 RT: What games do you play besides SoT?

RT: What’s your favorite thing about playing SoT? What makes you choose to play SoT versus another game?

skeemEra: I think the element of spending time to gather—not resources, but I guess in this game it would be considered treasure. Taking that time to gather loot, booty, treasure, and just having that risk of losing it all. That kind of element where you’re in an environment where you’re spending time—you’re investing time—in gathering a certain item, and you have a risk of losing it. And, you also have the thrill of taking it. I think that’s important. Grand Theft Auto has that element. Rust has that element. That’s the kind of stuff that I like. As long as there’s that PVP and that risk of losing it or the thrill of taking it, I think that’s an important aspect.

skeemEra: Oh yeah. One I can think of off the top of my head: there was a long pursuit on a skull fort, and we had been exchanging fire with a few galleons. I think when we started there were about four galleons at the skull fort. By the time we finished, there were just two people fighting for it. It ended with—I think—we had just finished clearing, our ship got taken out, we started heading back. Then while we were pursuing them—as they’re fleeing to the nearest outpost—they get attacked by a Kraken, and we got to take our loot back.

RT: Okay, as a final question—and kind of a silly one—there are rumors about possible pets in the game. Are you excited to get a pet? If so, which one?

skeemEra: I’ve heard of pets. I think the only one that I know is the monkey. So, I have a feeling that if those guys can steal me bananas, that’s a win. I’m going to name mine Diddy.

Diddy seems like a perfect note to end on. Big shout out and thank you to skeemEra for taking the time to do this interview with us. If you’d like to see more interviews, or if there are particular questions you all have for pirate legends, feel free to let us know in the comments below.

Cheers to those who’ve become a pirate legend, and pour one out for the pirate souls left in their wake.