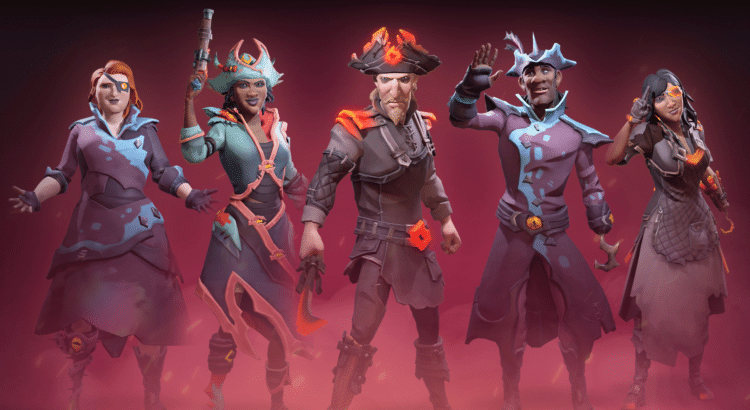 Disclaimer: This article was written for the original Forsaken Shores Campaign, in the fiery fall of 2018.

However, you might still find this article quite helpful for the 2020 Forsaken Shores Event!

From April 3rd – April 9th, pirates will be reliving the grand opening of The Devil’s Roar: visiting every island in the region and finding the fates of the Forsaken Alliance.

This guide will show you where to find the fates of five fallen pirates.

For what it’s worth, the event also requires pirates to step foot on 15 islands in The Devil’s Roar. But wait! Not counting the Seaposts, aren’t there 16 islands?

Good eyes, me hearties! Molten Sands Fortress had not yet been unveiled in the original Forsaken Shores update.

So, while only 15 islands are required for the event, you might want to hit all 16—just to fully round out your tour of The Devil’s Roar.

Forsaken shores has arrived, and it is chock-full with the most content to hit the Sea of Thieves yet! The most massive and thrilling addition of all is “The Devil’s Roar”: an entirely new and perilous region, where new threats lie in wait.

Sailing through unfamiliar waters to unexplored islands brings back memories of your first voyages in the Sea of Thieves!

Seek commendations in the “Forsaken Shores” Campaign and you’ll at least find your sea legs—plus a few doubloons!

There are 3 commendations categories:

Below, you’ll find an image and text-based guide to help you along. You might find the interactive map helpful, too. There you can see where the islands are in relation to each other, easily zoom in and out, and find a number of other helpful markers—in addition to…

There’s dark and mysterious lore woven into the “The Devil’s Roar.”

This adventure will have players scouring the new region for remains of the Forsaken Shore Alliance. There are five commendations to unlock: one for each of the horribly fated alliance members.

Below you will see the locations of the five beginning in the North and sailing down to the South in “The Devil’s Roar.”

Uncover the Fate of ‘Fetcher’ Farley

Where is Fetcher Farley?

You might venture a guess where “Fetcher” Farley found his final resting place: “Fetcher’s Rest.”

There is a hill on the West side of the island. On top of this hill you should see a gate. Just below that gate you’ll find Farley’s remains, leaning against a rock.

Uncover the Fate of ‘Flintlock’ Bert

Where is Flintlock Bert?

Like Fetcher Farley, ‘Flintlock’ Bert’s name gives you a strong hint as to where you might find him: Flintlock Peninsula.

Although his name also could suggest that he found his end in some grand firefight, he seems to have met a far darker fate.

Head to the North side of the island. On the shore, against the island wall, you will find the ultimately doomed Bert—trapped among the rocks, reaching out for help.

Uncover the Fate of Ruby Carter

Where is Ruby Carter?

“Ruby’s Fall” sounds like it was named for the glowing lava that falls from the sky. Alas, it seems to commemorate the quite literally “fallen” Ruby Carter.

Stay at sea level, but make your way to the middle of the island. If you look up, you’ll see a large wooden bridge connecting the island’s two large rock formations. If you look down, you will find Ruby’s remains sprawled below.

Uncover the Fate of Hepzibah Jones

Where is Hepzibah Jones?

Aye, this might be the forgotten soul that prompted your search for a guide. Hepzibah’s name gives no clue as to her whereabouts. Rather the island’s name seems to tell a piece of her tale.

Unlike the others, Hepzibah’s death does not seem to have been as sudden as some others. She is found in a slapdash camp—possibly left for dead—or forsaken.

Aye, you will find Hepzibah on the tiny island of “Forsaken Brink.” She’s laying in a makeshift shelter, in the middle of the island.

Uncover the Fate of Old Coop

Where is Old Coop?

Similar to Hepzibah, Old Coop’s name does little if anything to aid your search. Again, the island’s name foreshadows the fate you’ll uncover: “The Devil’s Thirst.”

Head to the large hill on the North side of the island. Coop will be found laying underneath some shark jaw bones—next to a tankard.

See Old Coop’s location on your map:
Old Coop on The Devil’s Thirst

To unlock these, you must complete Gold Hoarder and Order of Souls voyages in the Devil’s Roar.

Be Sure to Purchase
Gold Hoarder and Order of Souls Voyages
from the
Morrow’s Peak Outpost.

Here, too, the interactive map might prove useful. You can search landmarks and rock paintings to help with your riddle quests.

Of course, we’ve only just begun to add markers to “The Devil’s Roar.” So, there aren’t too many just yet—but there might just be the one you need!

To Unlock:
you must actually step foot on the islands.

Simply sailing your boat up to its shores won’t be sufficient.

Luckily, simply by doing the Uncover and Voyager commendations, you’re likely to visit at least 8 islands. Set foot on all 15 and the discovery commendations will be yours.

Before you begin, here are a few tips that might help you live to tell the tale.

There’s nothing revolutionary about these tips, but they are worth mentioning lest you—or in some instances a crewmate—be tempted to forego these precautions in your eagerness to set sail.

Before you embark on your journey load up, particularly on bananas and planks.

Resources are scarce in The Devil’s Roar.

Plus—with all the volcanoes, geysers, and hot water—you and your ship will be needing quite a bit of healing.

Rowboats are found at random along the beaches of various islands—throughout the entire world! So, you might find one before heading into “The Devil’s Roar.”

Bring the rowboat along by pushing it and rowing it to the back of your ship; this is where you will dock it.

If an island appears volatile, you might keep your ship at a safe distance and row into the island.

If an island appears peaceful, you can also sail up in your ship and drop off the rowboat as a quick get-away boat. That way one or more crewmates can stay on the island with this rowboat for an escape, while one or more other crewmates can sail your ship to a safe distance.

Tell-the-Tale Tip #3: Sail with a Crew

“The Devil’s Roar” is surprisingly difficult to manage solo.

If you find yourself in range of an erupting volcano, you and your ship might soon be finished.

A volcano can pepper your boat with holes, and a direct hit from a volcano will mean instant death for you—meaning little chance of patching those holes.

Of course, if ye be wantin’ to brave it alone, my hat’s off to ye…

To The Devil’s Roar!

Then again, if you’re still confused, feel free to ask questions in the comments below. Fair winds, me hearties.