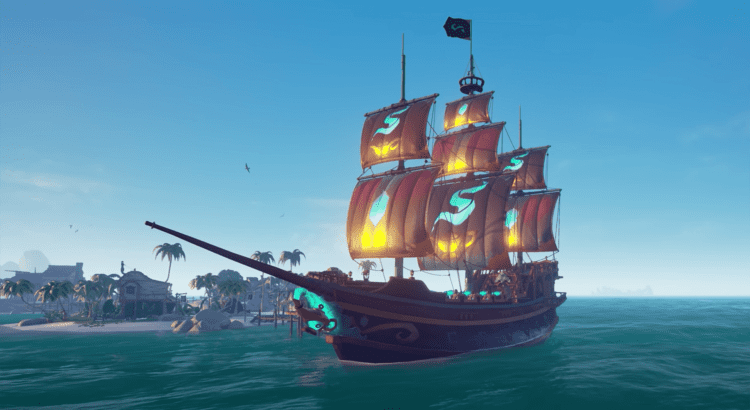 To celebrate the game’s third anniversary, the Pirate Emporium is also bringing back the beloved Reaper’s Mark Sails for a limited time!

So grab your Ancient Coins, celebrate the third anniversary of the Sea of Thieves and end the first Season strong!

The March Pirate Emporium update adds two new Collector’s Pets that will give you an extra shine as you sail the sea with them by your side!

Losing either of these two pets would be as devastating as losing your gold pouch! The Gold Curse Alsatian and Macaw were transformed into living treasures, making them as valuable as they are cute.

You can purchase each separately for 649 Ancient Coin.

As one might expect, you’ll discover new Weapon cosmetics, a couple of new emote bundles, a brand new Crew Set, and the monthly free emote in this month’s batch of Pirate Emporium customizations.

You can purchase the Sea of Sands Crew Set for 1,499 Ancient Coin. The costumes cannot be purchase separately.

Looking for another reason to show off your beautiful weapon cosmetic? Look no further than the new Showboater Weapon Pose Bundle. Not only will you get to flourish your holstered weapon to any nearby pirates, but do it while showing off your impressive weapon handling skills.

Depending on which weapon you have equipped, you will spin, swipe, and toss your weapons around.

You can purchase the bundle 249 Ancient Coin, which includes the Showboater Skills and Showboater Swagger emotes.

The season for hunting eggs…we mean coconuts, is upon us! You can celebrate the holiday with a brand new coconut-focused emote bundle.

This month’s free Pirate Emporium emote is the ROFL emote! Good for every hilarious occasion!

This genie-inspired ship set will attract pirates from all over in hopes of rubbing your hull and having their wishes granted.

The Sea of Sands Ship Collection includes the Sea of Sands Figurehead, Sails, Hull, Flag, Capstan, Wheel, Cannons, and Cannon Flare. You can purchase the collection for 2,499 Ancient Coin.

Sold separately is the Sea of Sands Collector’s Figurehead and Sails for 799 Ancient Coin.

The community favorite Reaper’s Mark Sails are back for a limited time to celebrate the game’s anniversary! You can purchase the sails for 499 Ancient Coin.