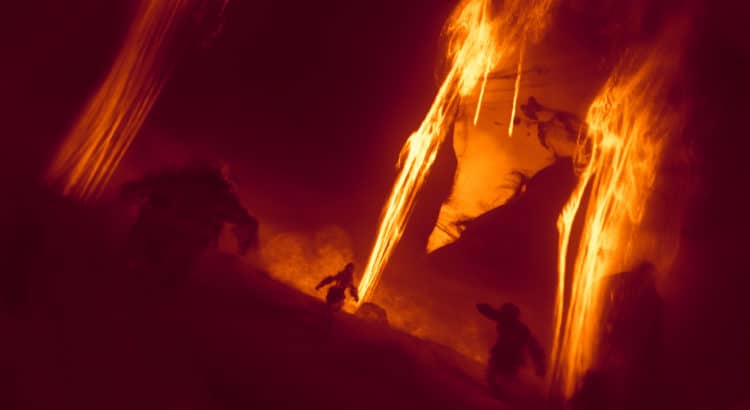 We have a MUCH more recent article on Fire in SoT: Sea of Thieves: How to Set the World on Fire!

In that article, we talk about the fire now in the game! For example, what you can set on fire, how you can start fire, new campfire mechanics, firebombs, water barrels, and so much more!

In this article, we talk about the moment when adding Fire to SoT was first leaked to the community—namely, how it leaked, and speculations on what fire could mean. It’s still a fun read, but if you want current information, go to: Sea of Thieves: How to Set the World on Fire!

If you’d like to continue reading this article… continue on, me hearties!

Always thinking up new ways to add color to this already vibrant world, it seems we might be seeing scarlet and amber hues glowing on the horizon. This new threat on the seas could potentially transform gameplay in so many ways, we’ve a firestorm of ideas!

How do we know Fire is coming?

‘Twas during the Sea of Thieves Weekly Stream—Revenge of the Morningstar. Senior Designer Andrew Preston, Game Designer Steven Dillon, and Sea of Thieves streamer DreadPirateDoug were sailing a brig, while James Thomas helped bring in community voices from the chat.

The seas were calm, and spirits were high as Andrew Preston had just shared a story of recovering nearly-lost loot. Taking advantage of these calmer waters to chat with the community, the fateful dialogue unfolded thusly…

James: “Yeah, and I think the biggest thing we’ve announced will be coming soon was fire. So, hopefully, there will be something for you…”

Andrew: “Is that announced, yet?”

James: “Are you kidding me?”

Andrew: “Joe, was that in the video?”

Joe’s response is inaudible, but Andrew’s uproarious laughter says it all.

You see, poor James had begun this stream with the fateful words:

“Hello, and welcome to the Sea of Thieves Stream. My name is James Thomas, and I’m back after my six-month ban for accidentally announcing parrots live on a stream. Let’s see what will happen this week.”

To see the dialogue for yourself, check out the stream. This link will begin the stream just before it all happens:

Oh, we can’t even begin to fathom all the possible ways fire could enter the Sea of Thieves! But, we’re so excited we can’t help but speculate wildly, and we hope you will all join us in doing the same in the comments below.

Lava’s heat and the fiery orb surrounding volcanic rock have been relatively contained. Both could certainly kindle any number of flammable items.

We asked Walter the Feared, but he didn’t seem to know anything about this.

Currently, we see the burn marks—and sometimes holes—from lightning. A lightning strike could be like striking a match.

Like the Devil’s Roar, the flames and embers seen in keg explosions have been rather contained. This wouldn’t have anything to do with the Outpost trading companies hoarding Gunpowder Barrels, would it?

This seems a bit less likely, seeing as cursed cannonballs have been designed to be temporary. Even if the fire were temporary, we wouldn’t assume the damage would be.

Moreover, cursed cannonballs are not generally—by themselves—damaging. For example, a Ballast Ball will lower a ship’s hull in the water, but if there are no second-level holes, this really doesn’t have any effect.

The one exception to this is the Venom Ball, which actually does damage a pirate’s health on its own, but even that does not damage a ship.

Ah, yes. There is a built in source of heat on the ships. Maybe the fire does not come from enemies, but rather your own negligent crew. Brig ’em!

Do these rituals conjure wildfire? Is uncontrollable fire a dangerous byproduct of a forbidden ritual gone awry? A conflagration that could threaten entire islands seems to be a good enough reason to forbid the ritual!

What can we pirates set on fire? Thus far, there are only three items a pirate can light with their lantern: other lanterns, braziers in Ancient Vaults, and Festival of the Damned beacons.

Might we be able to use our lanterns to light something else?

Hey! Sea of Thieves is a magical world, and Rare Thief is a safe space for all fantastical ideas! Dracarys!

Could this be fire that sets islands fully ablaze? If so, might this damage items left on the burning island? What about the wildlife? Might a wildfire at least wipe out any skellies you might have been fighting?

Fires on Outposts or Seaposts?

If fire befalls an Outpost or Seapost, will pirates be unable to turn in their loot? What will the trading company representatives do?

Again, perhaps the trading companies were stockpiling Gunpowder Barrels not to use them, but rather to keep them out of the hands of those who might be inclined to torch the outposts!

Maybe adding fire to the game is simply to enable us to build our own cooking fires on islands.

In the real world, campfires can be used to deter predators. Might they be used similarly in Sea of Thieves?

It might be nice to build a little campfire next to your favorite fishing spot and know that skellies won’t be bothering you. Perhaps there might even be a new predator animal to which this could apply…

Huzzah! What if we’ll be able to shoot flaming items at Krakens or Megs? What if those flames have magical properties, or fire has a particularly unusual effect on these monsters?

What if we find out Krakens or Megs are afraid of fire? What if we’ll be able to ward off these monsters by having large torches lit on the ship? Of course, this would provide an even bigger signal to enemy ships, and we’d hope warding off a Kraken with large flames might come with an additional risk…

As far as we know, all images currently circulating of Sea of Thieves ships ablaze are lovely little fan-photoshopped fun. However, our ships are made of wood. It’s only logical to think that if fire is coming to the Sea of Thieves, it could threaten this rather flammable vessel.

If a ship does go up in flames… “Umm… Captain? You want to pour buckets of water onto our ship?” Eh, maybe the fire would evaporate the water aboard?

This was a real battle strategy used in the era of wooden ships!

Of course, torching your own boat doesn’t sound too appealing, but maybe if you’ve got a freshly spawned boat, or you’ve stowed your items and supplies safely in a rowboat, on an alliance ship, or on an island (supplies in crates). Alternatively, maybe “Fire Ships” could be “Fire Rowboats”!

Of course, Fire Ships were historically used against entire fleets to destroy or scramble them. However, this merely begs the question… might we be facing a fleet sometime soon?

Will the Well of Flames be involved?

The Well of Flames was introduced in the Festival of the Damned. Thus far, it has only been a means of changing the color of the flame in your lantern—which you can then use to light other things, like beacons. Ooo! Pretty!

What if the color of the flame changed the fire’s properties…? Alternatively, what if possessing a certain color flame in your lantern helped you in some way?

Will this have anything to do with Captain Flameheart?

When first hearing fire would be coming to Sea of Thieves, I don’t doubt that every long-time fan thought of Captain Flameheart. This menacing Skeleton Lord first appeared in the E3 2016 Cinematic Trailer baring ribs that cage a fiery glow.

Most notably, you might have seen a book in the Rare shop titled, “Tales from the Sea of Thieves.” Captain Flameheart is the author of this book.

Interestingly, there has always been a reference to Captain Flameheart in Wanda’s Alchemy Lab. Even in the days of the Cursed Sails event, Article 3 of The Evil Pirate Code read, “All Hail Flameheart!”

For how to find this hidden cave—and for pictures of what Wanda’s Alchemy Lab used to look like—take a peek at the Cursed Sails Campaign Guide (you’ll want to scroll to step 7).

In the game, we have been graced by the presence of several other Skeleton Lords. As mentioned above, there was Captain Warsmith, who was once Wanda the Weaponsmith; she was introduced in Cursed Sails.

In the Tall Tales, we meet Captain Briggsy, Captain Graymarrow, and The Gold Hoarder. These three Skeleton Lords also show up in the novel Sea of Thieves: Athena’s Fortune—with the Gold Hoarder playing a particularly prominent role.

Like Captain Flameheart, The Gold Hoarder also had the honor of being replicated as a Stubbins Plush Figure.

If you have fought one of the Skeleton Lords currently in the game, you will know that they have special moves that the regular skeletons and skeleton captains do not have.

Perhaps Captain Flameheart will have special moves that involve shooting fire or setting things on fire. While The Gold Hoarder could summon regular skeletons from the ground, maybe Captain Flameheart can summon fire blazing skeletons that light anything on fire they attack!

Perhaps the lore that leads us to Captain Flameheart will involve us wielding or escaping threatening fires?

Do you have any Burning Ideas?

Whether any of these ideas actually show up in the game is immaterial. Part of what we love so much about this ever-evolving pirate world is the opportunity it gives our imaginations roam free! We look forward to seeing what your imaginations have concocted in the comments below…

2 thoughts to “Sea of Thieves—Fire! Setting the Seas Ablaze!”